Instagram has officially announced its coming ‘Creator Portfolio’ option, which will enable creators to build what’s essentially a media kit type package, in order to showcase their audience reach, as well as previous brand work. 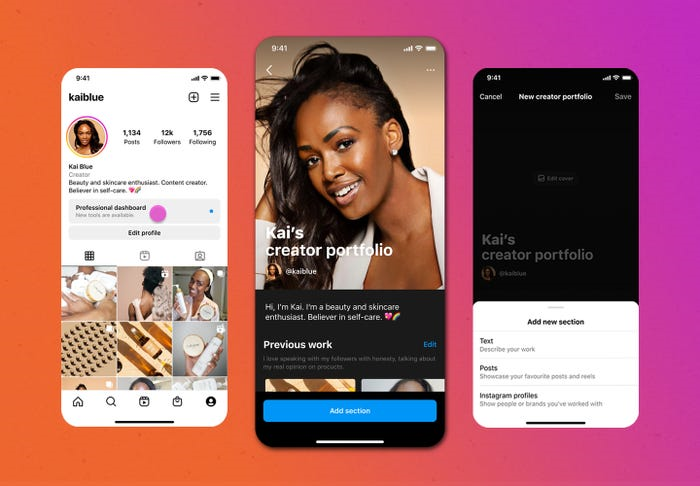 As you can see in this example, creators will soon be able to build their own portfolio from the Professional Dashboard in the app. The process will guide creators in building their pitch to brands, with a view to securing more influencer marketing deals.

It’s similar to Instagram’s Creator Marketplace listings where influencers are presented in a collective showcase – though a Creator Portfolio enables individual users to share their profile direct with potential partners in the app.

The option was originally spotted in testing last month, though Instagram has been refining the offering in recent weeks.

Earlier this month, app researcher Alessandro Paluzzi spotted this welcome screen for the option in the back-end code of the app, which includes an overview of how it will work.

Instagram’s been working hard to boost its appeal to creative talent, in an effort to keep its top stars from migrating to TikTok or YouTube instead, which was recently emphasized by Instagram chief Adam Mosseri as a top priority, as the platform stakes continue to rise.

Though Mosseri has also noted that Instagram has fallen behind in various key areas in the talent race.

“In [an internal] memo, Mosseri said that surveys of creators showed that Instagram “lag[s] behind TikTok and YouTube on all the dimensions that are most important to creator satisfaction,” including several unrelated to the ability to make money, such as “fun, reach, fair algorithm and care.” Mosseri also said the team is “behind where we need to be” on initiatives to help creators make money on the platform but is “upping our urgency and progress.”

Creator Portfolios will be another element in this push, which is also a part of Instagram’s broader push to insert more content from profiles that users don’t follow into feeds.

The idea here is that by getting a wider variety of content in front of more people, that will not only enable Instagram to maximize engagement (if it can get its algorithmic targeting right), but it’ll also facilitate wider distribution of content from emerging talent to a bigger audience.

That, in turn, will boost Creator engagement stats and opportunities, which could be another way to keep them posting to IG instead.

Whether that holds up in reality remains to be seen, with TikTok being the app of the moment, and YouTube offering greater monetization potential. But Instagram is still hugely popular too, and there are major opportunities there for the right creators, which will be expanded via this new showcase option in the app.

In addition to Creator Portfolios, Instagram’s also adding some new updates to Creator Marketplace, including a new messaging process to streamline brand/creator connection (brands will be able to message multiple creators at once via a partnerships inbox), and a new code process to better facilitate ad collaborations.

Definitely, the battle for top talent is rising, and it’ll be interesting to see how Instagram’s pitch to top talent matches up with other apps.

Creator Profiles will be rolled out to Instagram creators next month.