Twitter’s no good, very bad year continues, with the company this week being forced to inform some advertisers that their ads had been displayed in the app alongside tweets soliciting child pornography and other abuse material.

“Brands ranging from Walt Disney, NBCUniversal and Coca-Cola, to a children's hospital, were among some 30 advertisers that have appeared on the profile pages of Twitter accounts that peddle links to the exploitative material.”

The discovery was made by cybersecurity group Ghost Data, which worked with Reuters to uncover the ad placement concerns, dealing another big blow to the app’s ongoing business prospects.

Already in a state of disarray amid the ongoing Elon Musk takeover saga, and following recent revelations from its former security chief that it’s lax on data security and other measures, Twitter’s now also facing an advertiser exodus, with big brands including Dyson, Mazda and Ecolab suspending their Twitter campaigns in response.

Which, really, is the least concerning element about the discovery, with the Ghost Data report also identifying more than 500 accounts that openly shared or requested child sexual abuse material over a 20-day period.

Ghost Data says that Twitter failed to remove more than 70% of the accounts during the time of the study.

That finding stemmed from an investigation into Twitter’s proposed plan to give adult content creators the ability to begin selling OnlyFans-style paid subscriptions in the app.

Rather than working to address the abundance of pornographic material on the platform, Twitter instead considered leaning into it – which would undoubtedly raise the risk factor for advertisers who do not want their promotions to appear alongside potentially offensive tweets.

Which is likely happening, at an even greater scale than this new report suggests, because Twitter’s own internal investigation into its OnlyFans-esque proposal found that:

“Twitter could not safely allow adult creators to sell subscriptions because the company was not - and still is not - effectively policing harmful sexual content on the platform.”

In other words, Twitter couldn’t risk facilitating the monetization of exploitative material in the app, and because it has no way of tackling such, it had to scrap the proposal before it really gained any traction.

With that in mind, these new findings are no surprise - but again, the advertiser backlash is likely to be significant, which could force Twitter to launch a new crackdown either way.

For its part, Twitter says that it is investing more resources dedicated to child safety, ‘including hiring for new positions to write policy and implement solutions’.

So, great, Twitter’s taking action now. But these reports, based on investigation into Twitter’s own examinations, show that Twitter has been aware of this potential issue for some time – not child exploitation specifically, but adult content concerns that it has no way of policing.

In fact, Twitter openly assists in the promotion of adult content, albeit inadvertently. For example, in the ‘For You’ section of my ‘Explore’ tab (i.e. the front page of Explore in the app), Twitter continuously recommends that I follow ‘Facebook’ as a topic, based on my tweets and the people I follow in the app.

Here are the tweets that it highlighted as some of the top topical tweets for ‘Facebook’ yesterday: 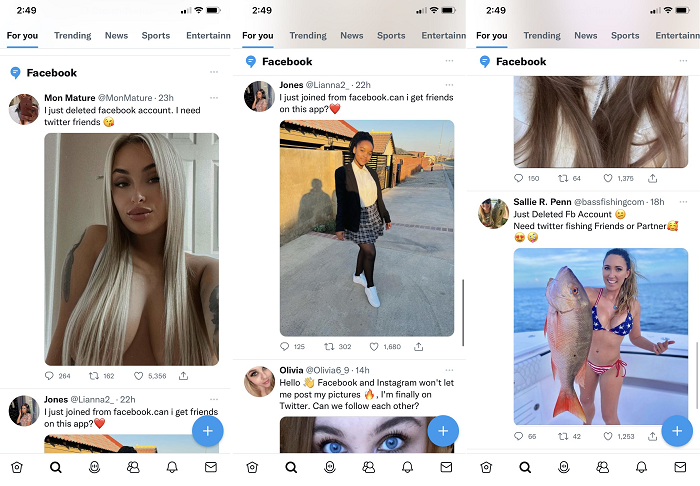 It’s not pornographic material as such, but I’m tipping that if I tap through on any of these profiles, I’ll find it pretty quick. And again, these tweets are highlighted based on Twitter’s own topical tweets algorithm, which is based on engagement with tweets that mention the topic term. These completely unrelated and off-topic tweets are then being pushed by Twitter itself, to users that haven’t expressed any interest in adult content.

Distributors of adult content view Twitter as the best social network for advertising, because it’s less restrictive than Facebook, and has much broader reach than niche adult sites, while Twitter gains the usage and engagement benefits of hosting material that other social platforms would simply not allow.

Which is likely why it’s been willing to turn a blind eye to such for so long, to the point that it’s now being highlighted as a much bigger problem.

Though it is important to note that adult content, in itself, is not inherently problematic, among consenting adult users at least. It’s Twitter’s approach to child abuse and exploitative content that’s the real issue at hand.

And Twitter’s systems are reportedly ‘woefully inadequate’ in this respect.

“A 2021 report found that the processes Twitter uses to identify and remove child sexual exploitation material are woefully inadequate - largely manual at a time when larger companies have increasingly turned to automated systems that can catch material that isn’t flagged by PhotoDNA. Twitter’s primary enforcement software is “a legacy, unsupported tool” called RedPanda, according to the report. “RedPanda is by far one of the most fragile, inefficient, and under-supported tools we have on offer,” one engineer quoted in the report said.”

Indeed, additional analysis of Twitter’s CSE detection systems found that of the 1 million reports submitted each month, 84% contain newly-discovered material – ‘none of which would be flagged’, by Twitter’s systems.

So while it’s advertisers that are putting the pressure back on the company in this instance, it’s clear that Twitter’s issues stem far beyond ad placement concerns alone.

Hitting Twitter’s bottom line, however, may be the only way to force the platform to take action – though it’ll be interesting to see just how willing and able Twitter is to enact a broader plan to address such amidst of its ongoing ownership battle.

Within its takeover agreement with Elon Musk, there’s a provision which states that Twitter needs to:

“Use its commercially reasonable efforts to preserve substantially intact the material components of its current business organization.”

In other words, Twitter can’t make any significant changes to its operational structure while it’s in the transition phase, which is currently in debate as it headed for a courtroom battle with Musk.

Would initiating a significant update to its CSE detection models qualify as a substantial change - substantial enough to alter the operating structure of the company at the time of the initial agreement?

In essence, Twitter likely doesn’t want to make any major changes. But it might have to, especially if more advertisers join this new boycott, and push the company to take immediate action.

It’s likely to be a mess either way, but this is a huge concern for Twitter, which should be rightfully held to account for its systemic failures in this respect.