Facebook is taking more steps to align with evolving privacy regulations by removing a swathe of detailed ad targeting options that relate to potentially problematic issues and causes.

“Starting January 19, 2022 we will remove Detailed Targeting options that relate to topics people may perceive as sensitive, such as options referencing causes, organizations, or public figures that relate to health, race or ethnicity, political affiliation, religion, or sexual orientation.”

In other words, you won’t be able to target your ads based on topics like ‘World Diabetes Day’ or other health causes, nor will you be able to hone in on elements related to sexual orientation, political beliefs, etc.

Which incorporates a wide range of targeting qualifiers, with Facebook noting that thousands of options will be removed.

For example, right now, when you look to target an audience interested in, say, politics, you have various affiliation-based topics to choose from. 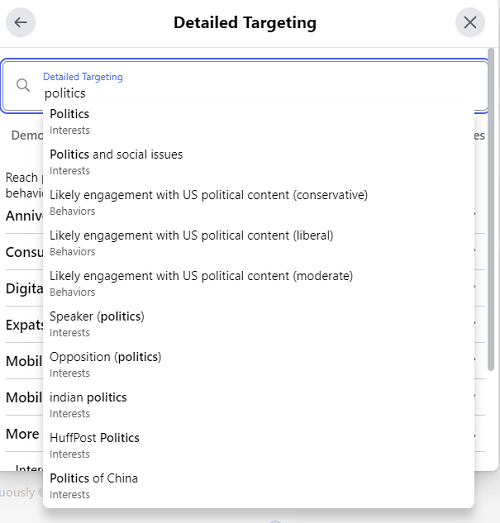 Soon, many of those will be no more, which could have a big impact on cause-based marketers, political parties, healthcare brands, and many more.

It could also cause businesses that have made certain issues part of their brand messaging to change their approach. Various studies have shown that young consumers, in particular, are more likely to buy from brands that support causes and movements that they align with, and as such, those businesses have also been able to use this as a marketing angle to connect with these communities. The removal of these targeting elements could change things in this respect.

Though you will still have some capacity to target audiences based on similar parameters. Facebook says that brands will still be able to use Engagement Custom Audiences in order to reach people who’ve liked their Page, or Facebook users who’ve watched their videos, while you’ll also be able to use the same as the basis for Lookalike targeting, along with your own email lists.

So, really, targeting based on a lot of these categories will essentially still be available, just not in such a specific form, which will alleviate Facebook of any responsibility for any misuse of such targeting for unintended purpose.

Under the EU’s more stringent consumer data protection laws (GDPR), Facebook technically can’t legally target users based on these parameters without explicit consent from each individual. That law came into effect in 2018, and Facebook has been battling it ever since, but with the broader, global shift towards more privacy, and more data control for users, it seems Facebook has now opted to concede the point, and align with the more specific regulations on such.

Which makes sense, on various fronts, but it’s yet another gradual reduction in the platform’s ad targeting options, which have already been reduced based on other potentially discriminatory factors.

There are still ways around such, and there are still other ways that Facebook’s ads can be used in what would be considered discriminatory ways. But the removal of these specific ad qualifiers will ensure that the company meets its legal requirements, and avoids potential penalties.

It’s essentially another reminder to build up your own first-party data, and gather info on your audience where you can, in order to establish your own focus lists, which you can then segment and target with more control, outside of the apps themselves.

Facebook says that existing ad sets with impacted targeting options will continue to run until Mar 17, 2022, though you may need to update your targeting selections at some stage. Facebook also says that it will provide alternative targeting recommendations within Ads Manager where possible.