It's not just Facebook's messaging tools that are slowly becoming more intertwined - this week, some users have reported seeing this notification in their Facebook feed: 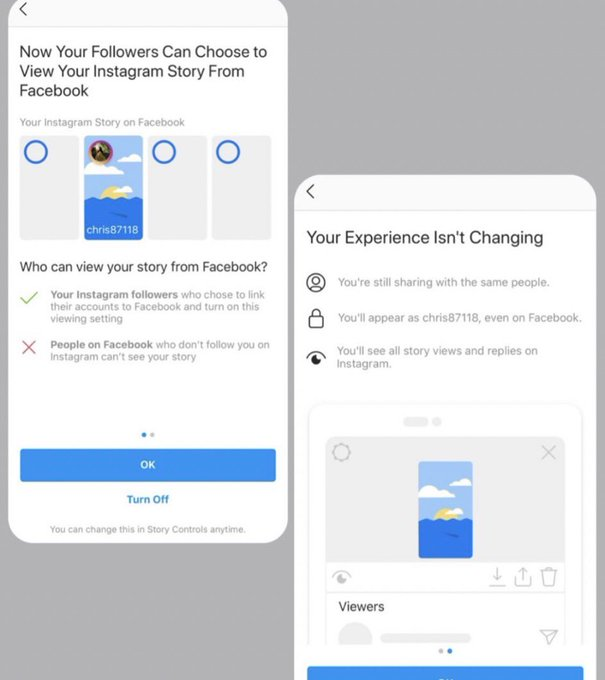 The screenshot, posted by Twitter user @ec_wife (and shared by social media expert Matt Navarra), has since been confirmed by Facebook, which has said that this is a limited test for now, and that it will be analyzing feedback on initial responses to the option.

Most people likely have connected their presences on both platforms, (as Facebook prompts you to do so at every opportunity), but it does also mean that the process is beholden to your privacy settings on both. If you've restricted who can access your Stories on Instagram, your Facebook connections also won't be able to see it. Unless they're in your 'Close Friends' group. Or something.

Basically, the only people who'll be eligible to view your Instagram Stories on Facebook are the ones that you're connected to on both. Which probably means your closer connections - but then again, brands that have a presence on both, which you follow on both, will also be eligible to have their Stories displayed via this linkage. I think.

At any rate, it's a small scale test for now, so you probably won't see this new pop-up. But if the test goes well, it could be another exposure option to keep in mind.

As noted, in some ways, it's an expansion of Facebook's effort to integrate its back-end processes, which some have suggested is a means to help it avoid being broken up, if the ongoing antitrust investigation into Facebook were to progress to that stage.

If Facebook could argue that its networks are all connected, and that functionality on each app is tied to the other, that could make it harder to separate its apps, if it were asked to do so.

At the same time, it also boosts Stories exposure, and could help Facebook increase engagement.

Again, it's a small scale test for now, but we'll definitely be keeping an eye on its progress.