Facebook Removes Over 1,000 Ad Targeting Options Due to Low Usage

Given that Facebook's capacity for hyper-targeted ads is one of its key strengths for marketers, it seems strange that the company would seek to remove any of its ad targeting options. Unless it had to, of course.

But that's what Facebook's doing - this week, The Social Network has announced that it will remove over 1,000 ad targeting options because they're either not used very often, or they replicate other audience targeting categories.

"As part of our latest efforts to simplify and streamline our targeting options, we’ve identified cases where advertisers - of all sizes and industries - rarely use various targeting options. Infrequent use may be because some of the targeting options are redundant with others or because they’re too granular to really be useful. So we’re removing some of these options."

Which makes sense - but then again, it still seems like Facebook would only remove ad targeting options for a reason.

Back in 2018, for example, Facebook deleted more than 5,000 ad targeting categories in order to stop potential discriminatory targeting, and the exclusion of certain audiences. That came after an investigation in 2016 found that the platform’s advanced ad targeting options could be used to exclude people based on ethnicity from property ads, which is in violation of federal laws. 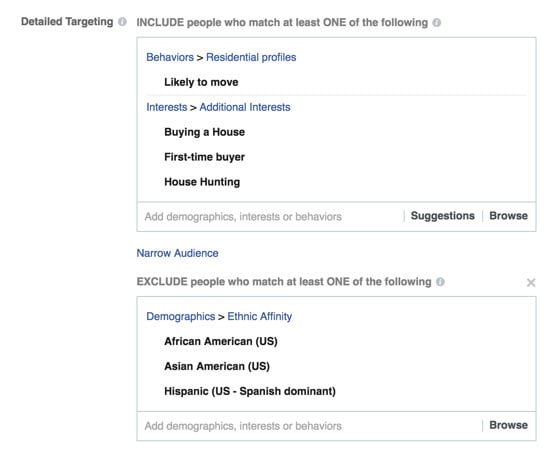 Most of the 5,000 options removed related to ethnicity and religion, then last March, Facebook implemented new rules around audience targeting relating specifically to housing, employment and credit ads. So, in the past, any of these changes have related to misuse concerns, which Facebook says is not the case this time around.

But it could be - in its additional notes, Facebook provides these examples of the targeting options being removed:

But they could both be used in reverse too, right? If I wanted to exclude people of a certain ethnicity, I could use multicultural affinity as an exclusion to keep them from seeing my ad, while if I didn't want to advertise to military personnel, I could use these targeting options to limit my ad exposure.

So while Facebook's saying that it's removing these options because they're just not seeing much use, it seems that it may have also detected some possible future concerns, which is why it's cutting them.

Either way, Facebook says that the changes will not impact the vast majority of advertisers, and many, many other audience targeting options remain available. So you'll still be able to exclude people if you want, you might just have to get more creative in your thinking around such.

Unfortunately, that's an inevitable side-effect of having such intricate ad targeting tools - they can be used to reach very specific audiences, which means that they can also be used in the opposite way, and at times, in violation of the rule of law.

The impact, in this case, should be minimal, but still worthy of note.