Facebook Shares New Insight on Ad Performance Based on Frequency

When you're outlining your ad campaigns, reach is obviously a key factor, but frequency - how many times each user is shown your ad - is also an important consideration, and can have a significant impact on response and performance.

But how much is too much - how many times should you show your ad to a potential customer in order to maximize engagement?

It's a difficult question to answer, because it obviously bears some relation to the product, the creative - there are various factors which could influence your results. But to get a better idea of how this works, Facebook recently conducted an analysis of 2,439 campaigns to measure how users respond, and at what point ad engagement starts to decline based on repeated exposure.

Facebook used its Brand Lift methodology to measure the results - Brand Lift utilizes polling and other brand awareness measurement tools to get a better understanding the true value of an ad.

Based on this, Facebook found that more impressions does correlate with better "action intent and ad recall rates", though there is a limit.

"There tends to be a plateau, with the positive results no longer increasing as significantly after a handful of impressions. While the exact number of impressions can vary, the key insight is that there is indeed typically a point of diminishing returns."

So how much is too much? As you can see in this chart, after 5 or 6 impressions, the results start to taper off, even for ads with 'good' creative. 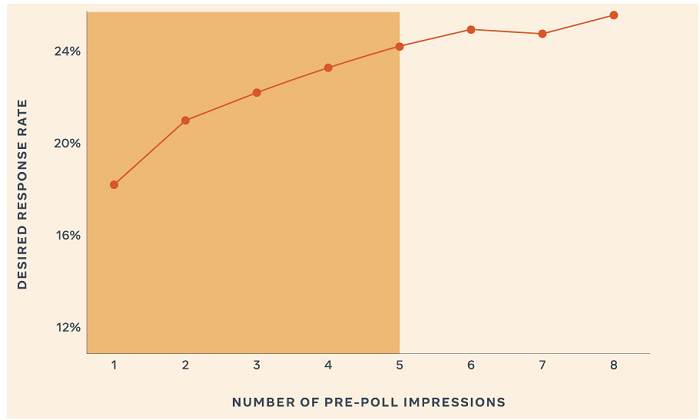 But as noted, that's also relative to the ad itself - a good, engaging ad will see better performance than an average one.

Facebook's Brand Lift data can also reveal some insight here - based on user responses within its dataset, Facebook was also able to divide the ad segments based on response rates. So, essentially, Facebook can measure responses based on good or bad ad content by measuring how people responded. 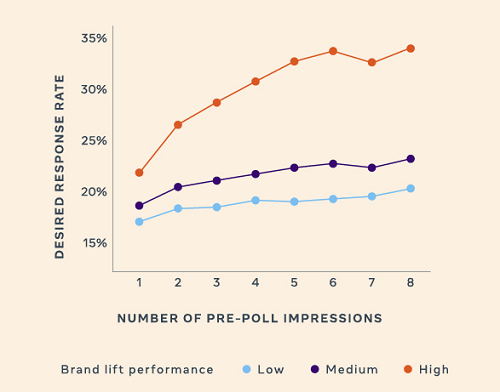 As you can see, the response rates for high engagement campaigns was significantly higher overall, but even on average performing campaigns, they still saw increased response up to around four or five impressions.

The results show that the quality of your ad creative remains key, but frequency should be a consideration in any campaign.

"A person seeing an ad more times is associated with better results, but after a point, brands receive less and less benefit."

Where, exactly, that point is will come down to your campaign, and you'll need to conduct your own research to determine your own results, but the data does indeed indicate that frequency is important, and can drive better response.

You can read more about Facebook's ad frequency research here.