The data, which Facebook has been tracking since July, incorporates responses from more than 30,000 small business owners across 50 countries, and highlights the key concerns and challenges they face as each seeks to maintain operations. The insight is valuable for virtually every organization, as the flow-on effects from SMBs will relate to spending in almost all aspects, and will influence future economic shifts.

You can download the full, Global State of Small Business Wave IV update here, but here's a look at some of the key notes and charts.

First off, in line with the last report, small business closure rates have continued to decline in most regions, which is a positive to some degree, though businesses are still shutting down as a result. 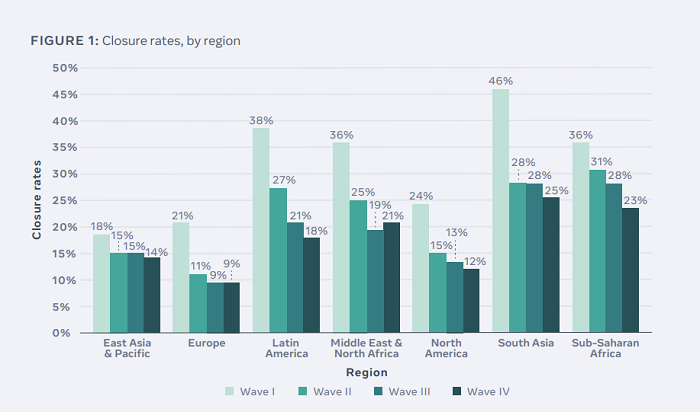 As you can see, only the Middle East/North Africa region saw an increase in SMB closures for the period.

Some of that would, of course, be cumulative - businesses that have closed in past periods can't shut down again, so this number is inevitably going to decline. But the lower rates suggest a level of stabilization, and ideally, we'll see these figures reversed once a vaccine is rolled out, and we can safely return to normal life.

Looking at closure rates by sector, there are also declines across the board, with 'Retail and wholesale' the only exception in the period.

Again, you would expect there to be some cumulative impact here, while the slight uptick in retail closures is a concern, as it suggests that the ongoing impacts are still worsening for consumer-facing businesses.

A more positive indicator is that fewer businesses are reporting significant sales impacts, in a year-on-year comparison. 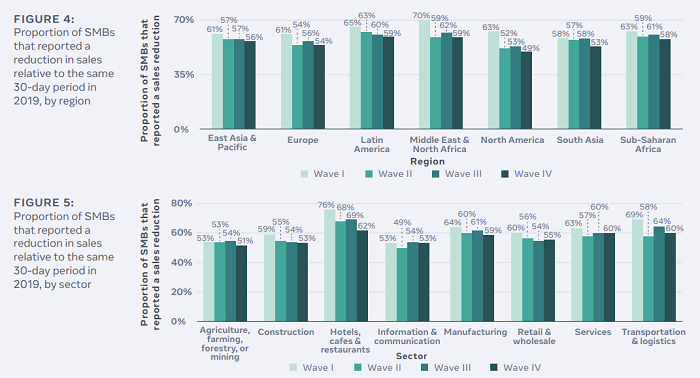 Businesses are still losing out, and a reduction in income in the 50%-60% range is obviously still major, but the numbers show that business activity is slowly improving, which is a positive sign moving forward.

The relative employment trends, however, are less reassuring:

As you can see, four of the eight listed sectors have reported a reduction in employment in the period.

Overall, SMB employment rates have remained fairly steady across Facebook's reports, with the proportion of SMBs reporting that they've increased employment rising marginally in the period from 5% to 6%. But the shift is still an overall negative, which will have compounding impacts on consumer spending behaviors.

Facebook's State of Small Business updates are not comfortable reading, but it is important to note the key trends and shifts being seen across the world, and how things are changing over time for SMBs, which will subsequently impact their behavior.

Hopefully, we're getting closer to the next stage of the pandemic, when we can actually look forward to a future without the looming presence of COVID-19, but as with all of 2020, a lot of the focus is on maintaining as best we can, until that next stage, whenever it comes, arrives.