This is a fairly minor update - and really, it seems like they should have gone this way a while ago - but Facebook is currently testing a new, visual-focused post composer update, which would put the latest images from your Camera Roll in a panel display just below the composer frame. 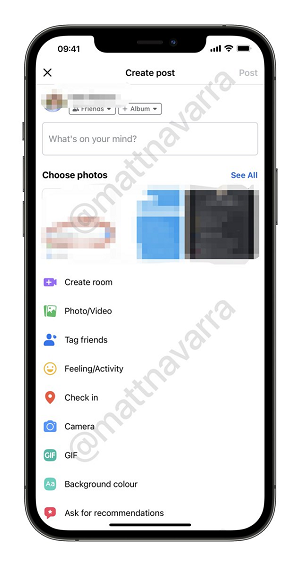 As you can see in this image, shared by social media expert Matt Navarra, some users are no seeing a new 'Choose photos' panel below the composer window, so they can quickly add one of their latest images to their update.

Which makes a lot of sense, given that photo posts see much more engagement than static text updates, and videos see even more engagement, on average, than that. And with the more visual Stories seeing increased popularity over time, it makes sense for Facebook to be putting more visual focus into its post composition process.

It just seems like they should have added this years ago, as it's not a new trend that visual-based posts are more popular.

In terms of practical value, as noted, it's not a major, functional addition, but more of a refinement to the current process, which could prompt more people to add visuals to their updates. But probably not. At 2.7 billion users, most people are pretty familiar with how Facebook works by now, so if they were going to add an image, they likely already know how to do it. Having their latest and photos and videos show up as a reminder could prompt a little more sharing, but it seems like the impact will be minimal.

But it's interesting either way, and it could make it a little quicker to put together your visual updates on The Social Network.

We've asked Facebook for more info on a full rollout and will update this post if/when we hear back.