Facebook has announced that it will now add new labels to all posts from federally-elected officials and presidential candidates which mention voting or ballots, irrespective of whether the posts contain misinformation or not. 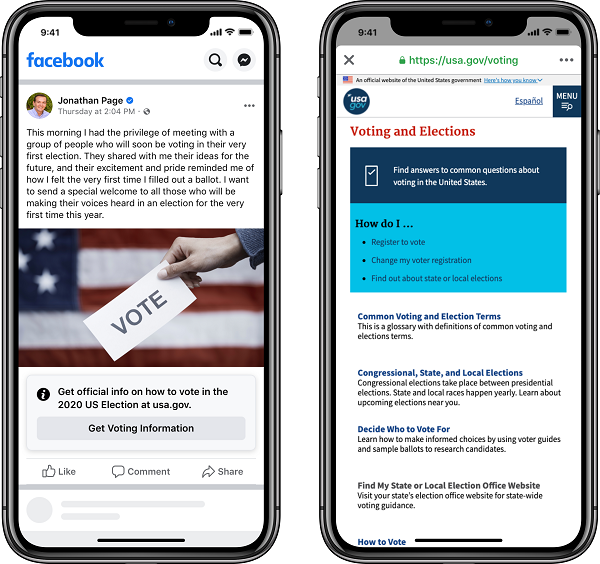 As you can see here, the new labels will include a 'Get Voting Information' CTA, which, when clicked, will take users through to a page on the USA.gov website (right screenshot above) which outlines various questions and answers about the voting process.

The update is a significant policy shift from Facebook, which has been heavily criticized over its refusal to add labels or warnings of any kind to posts made by politicians, or submit such to fact-checks, despite other platforms moving to take more action.

Back in May, Twitter sparked a new battle with US President Donald Trump after it added a warning label to these tweets. 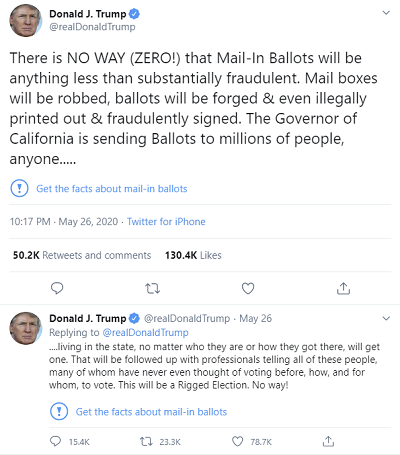 Twitter found that the ​while Trump's comments on mail-in voting did not violate platform rules, as such, they did warrant a warning label, given that they could mislead people as to how the mail-in process functions, and subsequently reduce voter participation.

"Private companies probably shouldn't be, especially these platform companies, shouldn't be in the position of doing that."

Since then, as noted, Facebook has seen ongoing backlash to its hands-off approach in this respect, culminating in a well-publicized ad boycott that's likely to cost the company billions.

As such, it's interesting to see Facebook alter its approach, even slightly, in this respect.

That's a positive sign, as it shows that Facebook, and more specifically Zuckerberg, is listening, it is hearing what the community is saying, and it is slowly evolving to meet those expectations. Facebook is still standing firm on its decision not to fact-check political ads, which remains a key point of contention, but maybe, with this small example, we are seeing that Facebook is looking to change its broader approach.

Zuckerberg noted that the company would look to add new labels to tweets from politicians in a live-stream announcement to address the rising concerns late last month.

There's still some way to go on this yet, and much debate to be had over the benefit of such labels, weighed against the potential harm of interference. But for those looking for change at the company, this is a relevant shift.

At the least, the new labels should help to ensure that Facebook users are given the opportunity to learn more about voting claims, while Facebook is also aiming to encourage more Americans to participate in the November poll via its Voting Information Center push in news feeds.