In the Wake of the Trump Bans, Social Platforms Need to Establish Clearer Parameters on Speech

At what point does banning a user become the only way forward for a social platform?

That question is probably a little different for a public figure, like a politician. For most users, the threshold for a full ban is much lower, and is largely binary, relating to direct violations of platform rules. But as we’ve been repeatedly told by Facebook and Twitter over the past four years, the regular rules do not apply to public figures.

But public figures have far more influence than the average user, and with that in mind, they should likely face tougher rules, if anything, because what they say could actually prompt people to take action.

But then again, by limiting public figures, particularly politicians, you’re then not giving people a chance to engage with, and discuss their views, which can then influence what people think of them - and importantly, how they decide to vote.

So at what point do you draw the line, and why is it that every platform has decided that right now, with days to go in his presidency, US President Donald Trump has gone too far?

To get a better handle on this, let’s first take a look at the platform rules. In relation to the Trump ban, Twitter’s official rules state that:

“You may not threaten violence against an individual or a group of people.”

That’s the main rule that Twitter has referred to in its various explanations the Trump suspension, along with its Civic Integrity Policy, which specifically relates to "manipulating or interfering in elections".

Facebook’s ruling on this is similar:

“Expression that threatens people has the potential to intimidate, exclude or silence others and isn’t allowed on Facebook.”

Specifically, CEO Mark Zuckerberg said that the banning of Trump’s account is due to the President’s repeated efforts “to use of our platform to incite violent insurrection against a democratically elected government”.

Inciting a violent insurrection is clearly covered by either of these official parameters, and as such, it makes sense that Trump was banned as a result.

But he wasn’t banned from either platform for this: 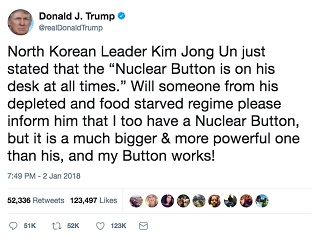 A regular user, of course, would have faced punishment for posting these comments, and again, a public figure like Trump has far more reach and influence. So if anything, it’s more risky to leave these posts up - but making a direct connection between Trump’s online comments and people’s ensuing actions is difficult.

Did Trump’s #BlackLivesMatter comment lead to more clashes amid the various protests? We don’t know, there’s nothing conclusive to suggest direct cause and effect. The US didn’t, of course, end up launching missiles at North Korea, so Trump’s comments didn’t lead to real-world harm in that instance either.

So is that the threshold for public figures? They can say whatever they want, with the rules only enforced in retrospect, and with definitive cause?

We can establish direct links between Trump’s election fraud claims and the Capitol riots - we know, with certainty, that his repeated claims on both Twitter and Facebook, sent out to his millions of followers, did incite that incident, which ultimately left five people dead.  We also know now, that, if allowed to continue, Trump will keep re-stating his election fraud claims, further provoking his supporters.

So the case for banning him now is clear – but then again, it’s not like we couldn’t see this coming.

Many experts and analysts are on record saying that such incidents would be the inevitable outcome of Trump’s relentless attacks on anything critical of him and his administration.

Have journalists been injured as a result of Trump labeling them ‘fake news’? Have other people been subjected to violence due to Trump’s social media comments? Probably, on both fronts, but again, we didn’t have any definitive connection to such cases. Till now.

So it's done, he’s gone, everyone can rest easy once again. But clearly, based on what we’ve seen, the platforms did wait too long to act.

So this is where we stand now, in working to establish what we’ve learned from the Trump era, and how that will change our approach to similar movements going forward.

In many ways, Trump is anomaly, unlike any politician or public figure that’s come before him, and the ways in which he weaponized social media are also something we’ve never seen.

But it’ll happen again. Some other extremist will learn from the Trump example, and look to use social platforms to provoke and incite his or her supporter base. It’s likely happening already, and it’s definitely happening in other regions of the world. So what have the platforms learned from this, and how can we implement new rules and thresholds on what’s acceptable to stop such movements in their tracks?

That’s what we really need at this stage. While coverage continues to focus on Trump being banned from the next platform and the next, and US Senators vote on what they do next in the administration’s final days, the real question is what happened that pushed it to this level, and where the bar needs to be set, so that we can't reach this point again.

That’s seemingly what Twitter CEO Jack Dorsey has alluded to in his latest commentary on the Trump bans.

That said, having to ban an account has real and significant ramifications. While there are clear and obvious exceptions, I feel a ban is a failure of ours ultimately to promote healthy conversation. And a time for us to reflect on our operations and the environment around us.

Dorsey says that the ban is a failure of Twitter’s own approach, which is correct, as Twitter, and other platforms, allowed it to get to this stage. Whether you agree with their previous actions or not, that’s the bottom line – Trump was banned because it got to the point where he was able to incite a violent insurrection via tweet. It got to that point because he was allowed to build a following based on half-truths and misinformation, while also discrediting all other outlets, thereby making himself the key source of truth for millions of Americans.

Had the platforms acted earlier, Trump would not have been able to establish a following passionate enough to undertake a coup on his behalf. So when should they have stepped in? At what point did Trump really cross the line?

That’s what the platforms now need to establish. And as many have noted, that’s incredibly difficult, because the rules of the game are always changing.

Even Zuckerberg himself has written about the challenges of moderating online speech:

“Our research suggests that no matter where we draw the lines for what is allowed, as a piece of content gets close to that line, people will engage with it more on average - even when they tell us afterwards they don't like the content. “ 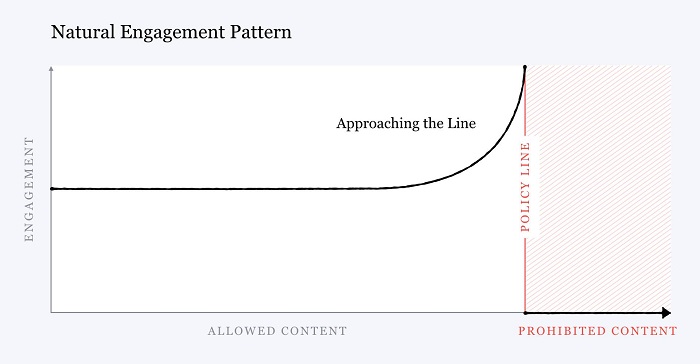 Sensationalism drives interaction, you only need to look at the long history of Hollywood gossip magazines to see this in effect. The problem now is that sensationalism also fuels engagement on Facebook, which is the biggest single network of connected users in history.

But now, in the wake of Trump, Facebook likely does need to draw a new line on this, both for public figures as well as normal folk.

Is that possible? Can Facebook and Twitter maintain their ideological goals of facilitating free expression while also setting clear guard rails as to where it needs to be pulled up?

They are, of course, within their rights to do so as private entities. But is that in their business interests? Is it something the platforms themselves should be ruling on, or can even be trusted with?

And even if you can answer these questions, how, exactly, do you establish when a discussion has over-steered from regular chatter, and into full-blown sedition?

This is the question that we need answered, more than anything else. What can we do to stop the next Trump or the next QAnon from building into an avalanche of misguided dissent?

Whether that’s entrusted to the platforms, or established via third-party regulators, the story right now is not what’s happened to Trump. It’s what it means for societal progress.