Instagram has launched an initial test of its new Subscriptions option for Instagram creators, which will provide another monetization avenue for platform stars, ideally providing more incentive for them to keep posting their content to IG, instead of being lured to TikTok or YouTube instead. 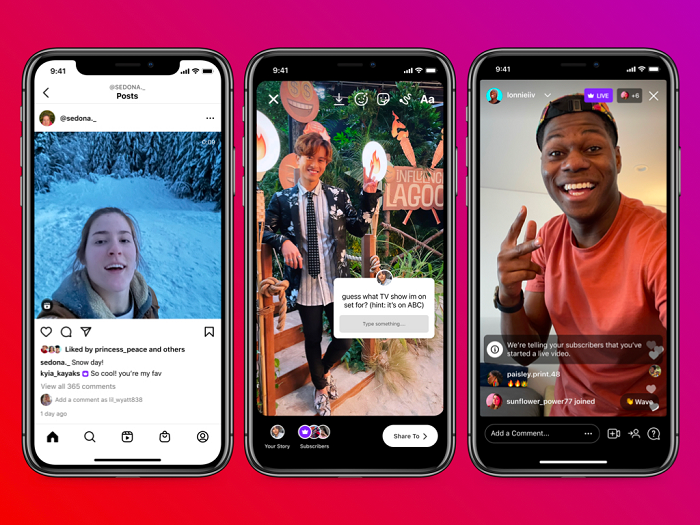 As you can see in these screenshots, the new subscriber icon is a purple crown, which will be attached to subscriber comments on posts, will highlight subscriber views on Stories and will signify live-streams that are only accessible by paying members.

“With Instagram Subscriptions, creators can develop deeper connections with their most engaged followers and grow their recurring monthly income by giving subscribers access to exclusive content and benefits, all within the same platform where they interact with them already.”

The option is currently in very limited live testing, with only a handful of prominent creators in the app. Those users now have a ‘Subscribe’ button on their profile, linking fans through to the sign-up flow. 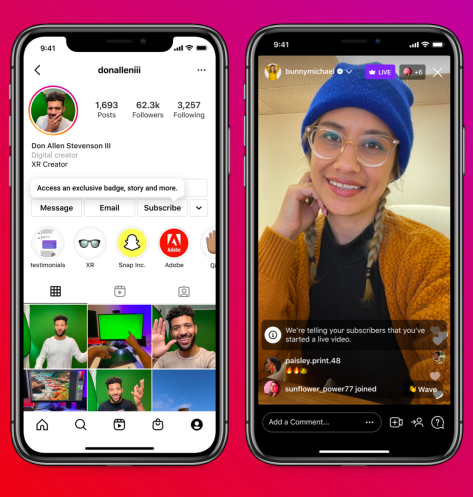 Those that do have access are able to charge a variable monthly amount for subscription – between $0.99 and $99.99 – which will give paying members access to:

Parent company Meta says that it won’t be taking in any cut of the fees from fan subscriptions till at least 2023, in line with Facebook’s fan subscription products, though any funds transferred will be subject to relevant app store fees and charges, as normal.

On iOS, that means any payments will be subject to Apple’s 30% fee, which Meta has repeatedly criticized, especially amid the pandemic, when it’s looking to maximize opportunity for people whose careers have been impacted by the various lockdown and other mitigation efforts.

Still, Apple doesn’t look like budging, which is another factor to consider within the fee structure for subscriptions, if and when more users get access.

It’s a good initiative, providing more opportunity for Instagram creators to monetize their efforts, though much the same as Twitter’s ‘Super Follow’ offering, the challenge will be in formulating a plan for sustainable, valuable add-on content that will keep your subscribers paying. Nobody wants to pay for content that they’ve thus far been able to access for free, so if you are considering how to monetize your efforts via subscription tools, you’ll need to also come up with a strategy for building value for your paying audience.

That’s not necessarily easy. How do you add value for your top fans, and provide exclusive content, while also maintaining enough of a regular posting process to keep bringing in more potential subscribers? Having the option is definitely a better situation to be in, but it will take more in-depth content mapping, in order to really add value to those willing to pay for your content, which will likely also require more time spent on creating content, another element to factor in.

Will you be able to make enough money from subscribers to justify that extra time spent?

This is much the same with all content creators – while it’s easy to watch, say, ‘Ryan’s Toys’ on YouTube and think that you could film your son or daughter unboxing the latest kids products and make millions yourself, it’s never as easy as it seems. The top creators have a defined strategy, a posting cadence, and they’ve built an actual business from their initial roots.

Not everybody can do this, and it is worth considering the extra work required in order to build a sustainable offering in this respect – because if you lose a paying subscriber, getting them back becomes increasingly difficult.

But even having those considerations is a bonus, and as noted, Instagram will also be hoping to build on its existing revenue share tools to make its platform a more appealing offering for more creators, keeping them posting to its platform, instead of testing the waters elsewhere.

Will that work? Definitely, right now, creators can make a lot more money on Instagram and YouTube, and while TikTok is working to catch up, eventually, when it comes down to dollars and cents, you can bet that a lot of creators will choose the most lucrative option for them.

Once creators reach a certain status, that becomes an even bigger factor – so it is feasible that, at some stage, Instagram’s expanded monetization offering will heap more pressure onto TikTok in the battle for top talent.

This note from Instagram’s press release was also interesting:

“Additionally, we believe that creators should know their audience and have more control over their business. We hope to build the tools to allow them to also directly connect with their audience off platform in the future.”

The capacity to have more control over your subscriber contacts is another big lure, which could prove very beneficial for Instagram over time.

It’s not a massive shift as yet, given the limited access to the option, but it’s a smart move from IG, which could eventually yield big benefits for the app.