Instagram has launched a new test of a feature that would enable users to post collaborative updates, both in the main feed and in Reels clips. 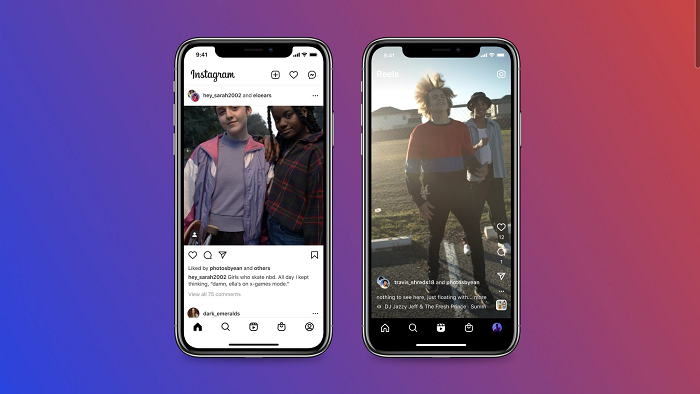 As you can see in these examples, with Instagram's new 'Collab' option, posts would appear with two profile bubbles, indicating that two people have partnered on the content.

As explained by Instagram's VP of product Vishal Shah::

"Collaborating is a huge part of how people connect on Instagram. To make that easier, we’re testing a new way for people to co-author Feed Posts and Reels, called Collab. From the tagging screen, you can now invite another account to be a collaborator on the post or reel. If they accept, both accounts will appear in the post or reel header, and it will be shared to both sets of followers."

As Shah notes, collaborative posts will be displayed to followers of both accounts, while they'll also appear in the photo grids and profiles of both users. Each collaborator will also be able to access post stats, and a single stream of comments will be available on each Collab update. Which could get interesting if one person has blocked a user that the other hasn't, but no doubt the outcome will be that any user blocked by either account will be unable to view a Collab update.

It's an interesting experiment, which could have particular value in maximizing engagement, and broadening the reach of posts among a wider set of users. And while the focus is on individual creators, and facilitating personal connection, it could also be a valuable tool for influencers and brands, with the capacity to partner up on content that could then be displayed to both of their audiences at once.

Expect, also, to see it become a new 'growth hack' option, with people asking their followers to also follow their friends via Collab updates.

But even with potential misuse considerations, it could be an interesting addition, which could help to strengthen Instagram's community connection, and keep users more aligned to the app.

The new option is currently being tested with selected users in the UK and India, with no official plans for an expansion just yet.