Last week, when Instagram released its TikTok-inspired Reels functionality into more regions, amid ongoing speculation about the future of TikTok in the US, tech analyst Josh Constine noted that one of the key flaws of Reels, at launch, is that there's no front page presence for the functionality, making it more difficult to find Reels content.

Instagram Reels can't win without conviction about micro-entertainment:
-Reels needs homepage presence like this mockup I made
-It must let creators share just to the algorithm, not friends, so they can experiment with cringey/crazy content without ruining their profile pic.twitter.com/qqzv6Wyccu

If Instagram really wants to build a TikTok rival, it probably needs to consider the immediacy of the TikTok feed, which opens up on an auto-playing video stream when you start the app.

And it seems that Instagram is aware of the same.

Today, several German Instagram users have reported seeing a new layout in Instagram, which put a new Reels button on the bottom function bar, and moves the Discover magnifying glass to the top, next to the Direct tab. 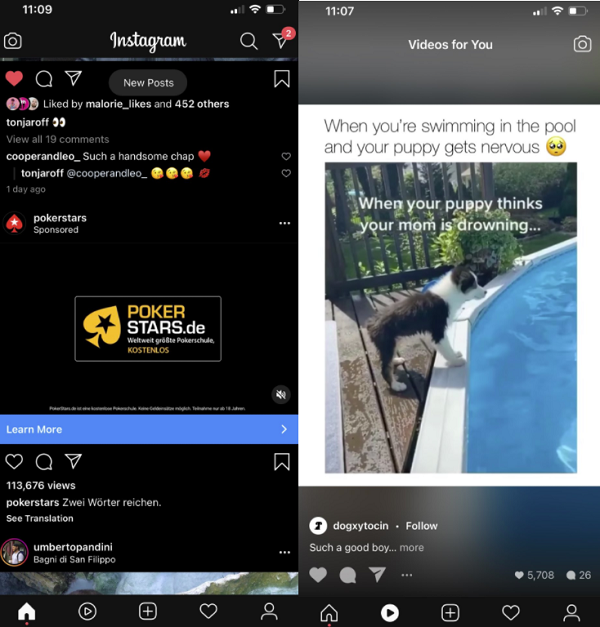 You can see the updated format in these screenshots, posted by user @AJ_Malakai on Twitter (and shared by social media expert Matt Navarra) - the play button with a circle is the new Reels stream, with the Discover button up top.

That would give the Reels feed a lot more focus, which could make it a more significant element. Even if, as Constine also notes in his tweet, Instagram's Reels algorithm isn't on par with the TikTok stream, just yet.

TikTok's algorithm is seen as a key element in the app's success, with the focus of the app shifted to content, not contacts. All of the videos posted to TikTok can be seen by anyone, unless a user chooses to make their account private. So in variance to Instagram, where only your friends will see your posts, the main TikTok feed can be populated by a wider range of clips that align with your interests.

Given the privacy parameters already established within Instagram, it can't really replicate that experience with Reels, unless it looks to showcase all publicly posted Reels in their own tab. Which is still not the same, as it won't open to Reels content, like TikTok does. But it's closer. That appears to be what Instagram's going with in this test.

Initial responses to Reels in general, however, suggest that the option still has a way to go to truly rival TikTok.

"I can definitively say Reels is the worst feature I’ve ever used."

Lorenz specifically criticized the functionality of the option, noting that:

"[Reels is] confusing, frustrating and impossible to navigate. It’s like Instagram took all the current functionality on Stories (a tool to publish montages of photos and videos with added filters, text and music clips), and jammed them into a separate, new complicated interface for no reason."

Most responses on Twitter seem to mirror the same - Reels is okay, but it's not TikTok. So if TikTok does eventually avoid a ban in the US, it'll likely retain its audience, even with Instagram making its big push.

Could a new tab for Reels on the main screen change that? Maybe. Maybe, by giving Reels more exposure, more creators will be enticed to try it - but based on early responses, it probably has a few other issues to work out, and it probably, really, makes Instagram a little too bloated, as myself and others have suggested.

So far, the new layout only appears to be being tested in Germany, where Reels was launched back in June. We've asked Instagram for more info, and we'll update this post if/when we hear back.

UPDATE (8/13): Instagram has confirmed the test, providing this statement:

"We're testing a new tab on Instagram to make it easier for people to enjoy Reels. We're bringing this to places where we've been testing Reels for a bit, and will decide how to roll this out further."