Given the rising popularity of Clubhouse and audio-based social interaction, and its capacity for connecting professionals around niche, industry discussions, it will likely come as no surprise to find out that LinkedIn is also developing its own audio rooms product to tap into the trend. 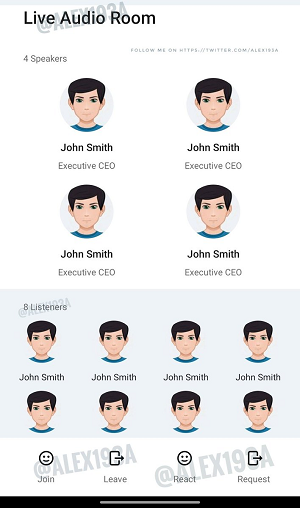 As you can see in this mock-up design, posted by app researcher Alessandro Paluzzi, LinkedIn will soon offer live audio rooms, which users can host and join in the app.

Following Paluzzi's initial post on discovering the feature in the back-end code of the app, LinkedIn shared this more polished version of how the new option will look with TechCrunch.

As you can see, the UI is very Clubhouse-esque, with a feature box for speakers at the top, then a listing of those tuning into the discussion underneath.

“We’re seeing nearly 50% growth in conversations on LinkedIn reflected in video shares, stories and posts on the platform. We’re doing some early tests to create a unique audio experience connected to your professional identity. And, we're looking at how we can bring audio to other parts of LinkedIn such as events and groups, to give our members even more ways to connect to their community.”

As noted, given the rising popularity of Clubhouse, the development comes as little surprise, with Twitter and Facebook also working on their own versions of the same to tap into the trend. But it could be even more valuable on LinkedIn, with professional-based rooms aligned with specific niches, helping to improve connections and build your industry presence.

That could be a major boost for LinkedIn's broader focus on building new options for creators, and encouraging them to expand their presence on the platform. Audio rooms would facilitate a range of new potential opportunities in this respect - while it could also give brands more options to build community in their respective areas.

It could also be another blow for Clubhouse, which is already seeing a slowdown in download activity. With other platforms providing bigger audience reach, and tools with which influencers can broadcast to their already established audiences, that could be a more appealing option, and could stop new users drifting to Clubhouse instead.

Even more problematic is that these platforms are looking to launch Android versions of the functionality before Clubhouse has its own Clubhouse app. That could end up being a major limitation, which again, stops potential users ever even downloading Clubhouse in the first place.

Right now, LinkedIn's audio rooms are in early stage testing, and LinkedIn is still fleshing out the option. But you can likely expect to see yet another audio social option sometime soon.