LinkedIn has seen another quarter of 'record engagement' while it's also surpassed $10 billion in annual revenue for the first time, according to the latest data from parent company Microsoft. 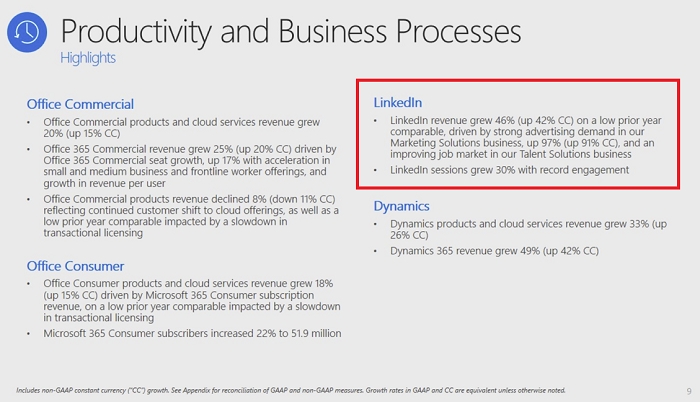 As you can see here, LinkedIn continues to see both active sessions and in-app engagement numbers rise, while its revenue performance is increasing in line with that actiivity:

With more people turning to the platform as the US economy looks to get back on track, with the vaccine roll out opening up more areas, that's seen more brands seeking to connect with decision-makers via LinkedIn's ad tools, boosting Marketing Solutions performance, while it's also benefited from the shift to online events in place of physical meet-ups.

LinkedIn has also been making a more concerted effort to connect with relevant brands, and showcase its reach capacity, which is clearly paying off, based on these numbers.

Additionally, LinkedIn has also surpassed another significant milestone, with platform revenue now exceeding $10 billion for the first time in the fiscal year, up 27%.

As per Microsoft CEO Satya Nadella:

“Our results show that when we execute well and meet customers’ needs in differentiated ways in large and growing markets, we generate growth, as we’ve seen in our commercial cloud – and in new franchises we’ve built, including gaming, security, and LinkedIn, all of which surpassed $10 billion in annual revenue over the past three years.”

Overall, Microsoft revenue increased by 21% year-on-year for the quarter, rising to $46.2 billion, while Microsoft's full fiscal year revenue was $168.1 billion, up 18%, underlining the ongoing strength of the tech giant.

With more businesses becoming more reliant on digital connectivity, especially during the pandemic, all of the major tech players have benefited, and Microsoft's various divisions are generating strong results, with LinkedIn now becoming a key contributor to that growth.

Which wasn't always the case. Back in 2016, when Microsoft acquired LinkedIn for $26.2 billion, the professional social network was on track to generate $3.7 billion for the full year. At that time, LinkedIn had around 430 million members, which it's now increased to 774 million, while it's continued to report 'record levels of engagement' virtually every quarter since the Microsoft merger.

That's helped boost overall ad exposure, while the platform has also developed a range of new ad tools, particularly in terms of video content (according to LinkedIn, its users are 20x more likely to share a video on the platform than any other type of post), which has increased brand opportunities to use the platform to connect with relevant audiences.

Ideally, of course, LinkedIn would provide more specific data on active user accounts, as 'members' is not representative of the amount of people that are logging in and scrolling through the app each day. But still, the data available does suggest that LinkedIn is on the right track in terms of improving user engagement and boosting membership, which may be worth considering in your process.

You can check out LinkedIn's full Q3 2021 performance update here.