LinkedIn has published a new analysis of the most effective InMail tactics used by recruiters around the world, in order to highlight key engagement trends and notes to help optimize InMail outreach.

The analysis is based on 'tens of millions' of InMails sent by corporate recruiters between April 2020 and February 2021. And while the insights are focused on recruitment InMail specifically, they likely bear relevance to all InMail outreach, based on platform usage trends, as they essentially relate to how users respond to messages within the app.

First off, LinkedIn says that shorter InMails perform significantly better than longer ones 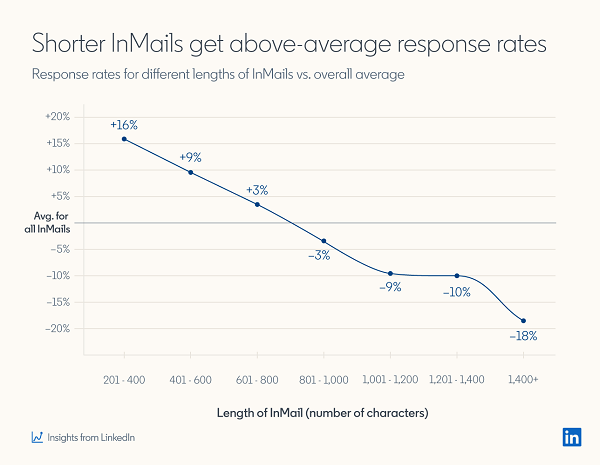 "The response rate for InMails of 201 to 400 characters is 16% above the average rate. In other words, these shorter InMails are 16% more likely to receive a response, compared to the average-lengthed InMail."

Though LinkedIn does also note that less than 10% of all InMails are under 400 characters, with the majority falling between 400 and 1,000 characters. 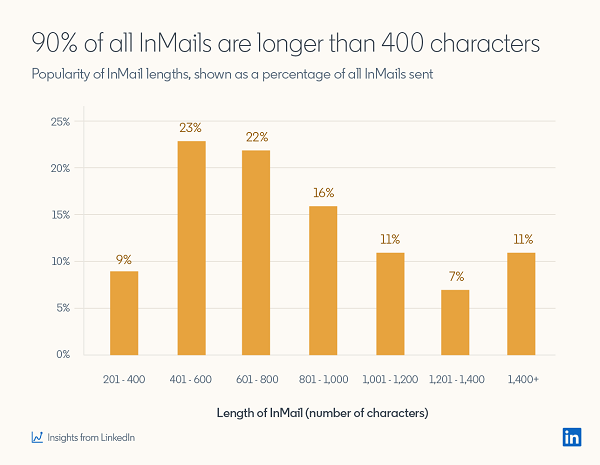 "That may be why shorter InMails are so effective: They stand out from 90% of other InMails simply by their brevity. Another likely reason is that candidates - passive candidates especially - are probably busy, and it’s much easier for them to read and respond to a quick message."

So while shorter InMails perform better, there's also a lot fewer of them in the study pool, which could influence the data. But even taking that into account, as you can see from the above graph, the longer the InMail, the lower the response rate.

That's definitely worth noting in your outreach planning.

LinkedIn has also provided this example of an InMail under 400 characters in order to highlight just how concise optimal InMail messaging is. 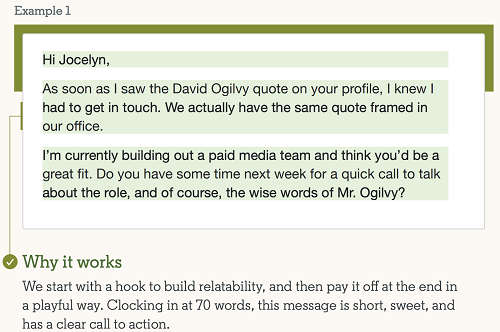 Next, LinkedIn says that weekdays are best for sending InMail, with similar response rates throughout the week. 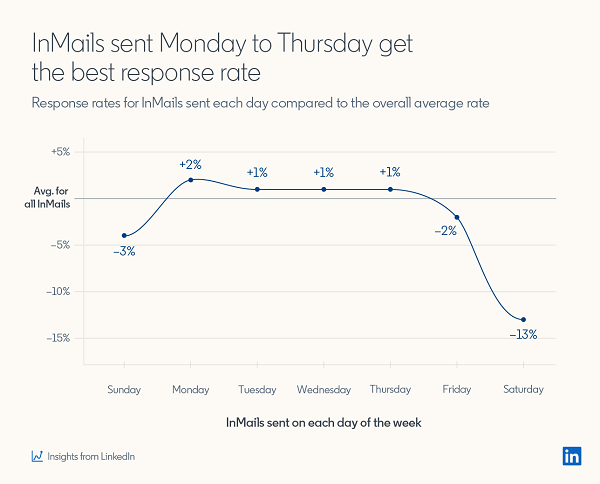 "Monday is the best day of the week to send an InMail, but just barely. Even sending an InMail on Friday or Sunday barely makes a difference - they only perform 2% or 3% below average."

Though as you can see, nobody wants to read InMail on a Saturday - so if you are planning an InMail campaign, avoid Saturday for your outreach.

LinkedIn also found that personalized InMails perform about 20% better than ones written or sent en masse.

Which makes perfect sense. No doubt you've been sent those impersonal, cut and paste email templates that make you feel like you're a part of a task that needs to be completed, as opposed to a person valued for their skills or expertise.

Of course, mass e-mail blasts save time, but especially in recruiting, it's important to make the initial connection, and ensure the candidate feels valued.

Really, that probably applies to all email outreach, and should be applied wherever possible (and reasonable) in your planning.

And lastly, LinkedIn found that members who use the “Open to Work” signifier on their account are 75% more likely to respond than others. 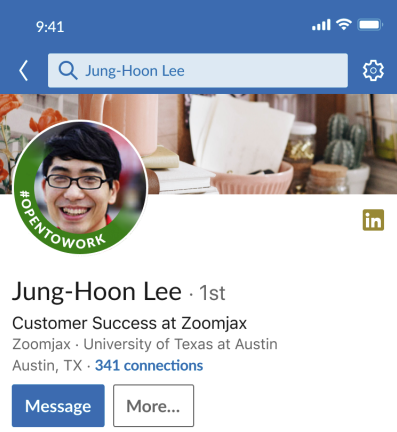 Launched last June, as part of LinkedIn's efforts to help those impacted by COVID-19 to find a new job, the 'Open to Work' profile feature highlights to recruiters that you're open to offers, which they can then tap through on to find out what types of jobs you're looking for, where you want to be placed, etc.

Given this, it's little surprise that response rates from these accounts are significantly higher for recruitment outreach - but that may prompt more recruiters to give these profiles a look, which could make it a more valuable tool for connecting with new opportunities.

There are some interesting insights here, and some key points that could help shape your InMail outreach. And aside from recruitment, brands can use LinkedIn's InMail for message ads, with these pointers potentially providing some key notes on how to improve your campaigns, and maximize response.

I mean, really, the key note is brevity, given that response rates are relatively same throughout the week, while avoiding templated emails is also highly recommended to maximize engagement.