LinkedIn Up to 722 Million Members, Continues to See 'Record Levels of Engagement'

Given more people are looking for work amid the COVID-19 pandemic, it's little surprise that LinkedIn has seen increased usage, with parent company Microsoft reporting that the professional social network saw 'record levels of engagement' - up 31% - in the most recent quarter.

The findings are listed in Microsoft's FY21 Q1 report, which the company published this week, outlining its key performance highlights in the period. 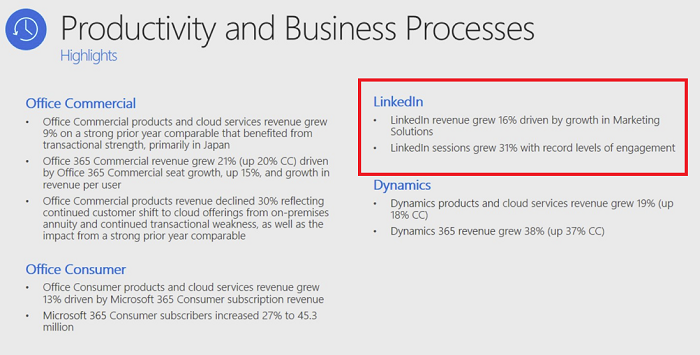 As you can see here, LinkedIn revenue is also on the rise, up 16%, driven mostly by increased ad spend.

"Advertiser demand on LinkedIn returned to near pre-COVID levels, up 40% year over year, as marketers use our tools to connect with professionals ready to do business. And organizations continue to tap into the combination of LinkedIn Sales Navigator and Dynamics 365 to ensure salespeople have the context they need to sell remotely."

It's worth noting that, back in July, LinkedIn cut 6% of its global workforce - or around 960 roles - in its Global Sales and Talent Acquisition organizations due to the downturn in activity due to COVID-19. LinkedIn explained at the time that with fewer companies able to hire at the same volume that they had in the past, the demand was simply not enough to sustain regular operations in this element.

That move was primarily focused on Talent Solutions due to the slowdown in hiring, so LinkedIn may well have made the right call in reducing its staff burden in this respect. But these figures suggest that it may have overestimated the impact on ad sales, with more businesses looking for new ways to maintain sales during the pandemic.

In addition to this, Microsoft's also reported that LinkedIn is now up to 722 million members worldwide, up from the 675 million it reported in January this year.

As always, it is worth clarifying that 'members' and 'active users' are not the same thing - LinkedIn doesn't share monthly or daily active user counts, which make it difficult to gauge the actual comparative usage of the app. We just have to take Microsoft at its word that LinkedIn is seeing 'record levels of engagement' - but what that means, exactly, we don't know.

Previous estimates have suggested that LinkedIn's active user base is generally around half of its total audience, which would put it at around 361 million MAU. For comparison, Twitter reported having around 330 million MAU before it switched to its new mDAU stat early last year.

Microsoft notes that in the period, LinkedIn launched its new redesign, and added Stories for (almost) all users.

But again, no usage insights on Stories, or how popular the new feature has been. LinkedIn took its time expanding the roll-out of the feature, with Brazilian users getting Stories back in June, months ahead of the expanded launch in September. That could suggest that the function wasn't gaining significant traction in the early test markets - but then again, maybe it was just expanded testing to ensure everything was in place.

We don't know, because we don't have any usage insights, but hopefully LinkedIn will share more about Stories usage and trends soon.

In addition to this, Microsoft also notes that LinkedIn Learning has also seen a big increase in usage in 2020.

"More professionals are turning to LinkedIn Learning to increase their knowledge capital, watching more than a million hours of content each week, more than double the amount a year ago. Three people are hired every minute on LinkedIn, and new features make it easier for nearly 40 million job seekers to indicate they’re looking for their next opportunity."

Again, that comes as little surprise, but it's another element of strength for the platform, which should help it continue to grow as we move into the last period of the year.

Microsoft says that it expects LinkedIn's revenue growth to continue, with the improving ad market and continued strong engagement set to hold it in good stead for the next phase.

That could present new opportunities for your ad campaigns - if you're looking to reach professionals, the numbers here indicate that LinkedIn could definitely be worth consideration in your approach.