New Report Looks at Best Times to Post to Each Platform, Based on Insights from 20k Users

Sprout Social has published its latest listing of the best times to post to each of the major social media platforms, which is based on the company's 20,000+ customer base, who use the platform to schedule and post online.

By analyzing this data, Sprout has determined the best times to post based on when this content is seeing the highest engagement rates - which is slightly different to the information you'll get from on-platform insights, as those reports are generally based on when users are active in-app.

That could make Sprout's report a more accurate indicator of the best times to post for optimal engagement - but it is always worth noting with these 'best times' reports that the information being presented is generic, and based on a broad data set. The best times for you to post will be relative to your unique audience and their habits, but even so, data overviews like this can help to guide your posting strategy, and help you tap into your best posting cadence quicker to improve your results.

Here's what Sprout found in analyzing the data from last year - and one other key proviso: all the times listed refer to Central Time Zone (CST).

These trends would likely hold in other regions as well, but it is worth clarifying this note ahead of time. 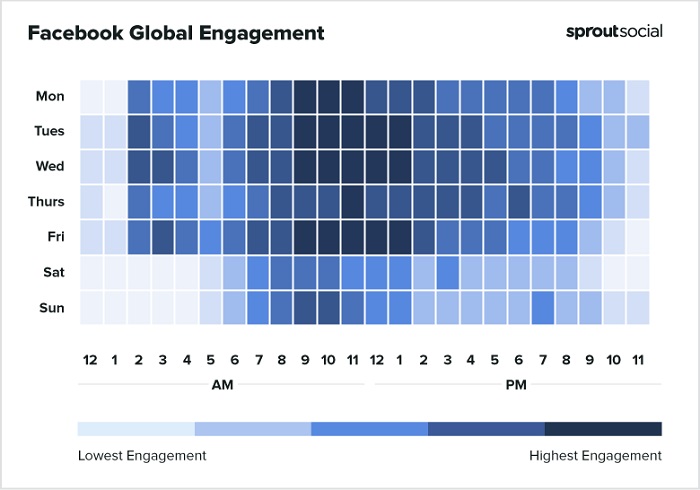 As you can see in this chart, Sprout Social says that the best times to post to Facebook are on Tuesday, Wednesday and Friday, between 9am and 1pm. Monday between 9am and 12pm also looks pretty good, so there's a range of good engagement times to experiment with.

Sprout says that the weekends are the worst time to post - which makes some sense, in terms of users looking to spend their time doing other things. But then again, you would also expect that people would have more free time, and be more responsive on weekend days.

Not so, according to the data, which is largely in line with what Sprout also found in its report on the same last year.

I mean, that does also run counter to a report published by Blog2Social earlier this year, so you can take it or leave it - but again, this is based on engagement stats among Sprout's 20k users. It could help provide some guidance for your approach. 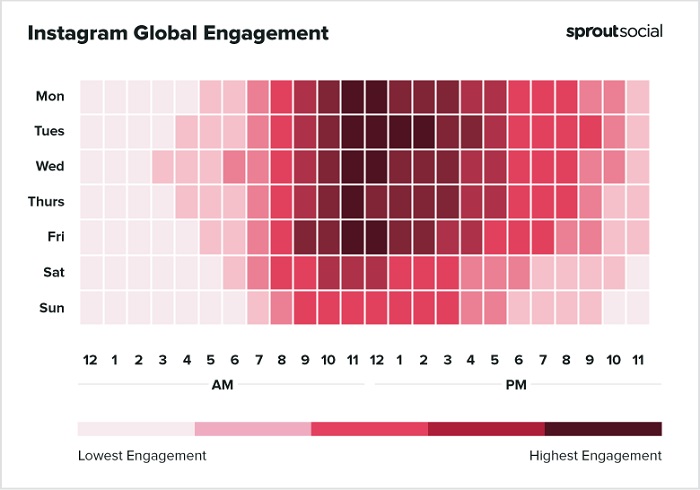 Sprout says that Tuesdays between 11 am and 2 pm, and Monday through Friday from 11 am to 12pm are the best times to post to IG.

Like Facebook, the engagement on weekends looks a lot worse - but it would be also interesting to note whether the data here is skewed by business users of Sprout Social who don't post as much on weekends. If they're not posting, they won't be seeing engagement, and that could seemingly influence the results, which may make weekends look less engaging than they actually are. 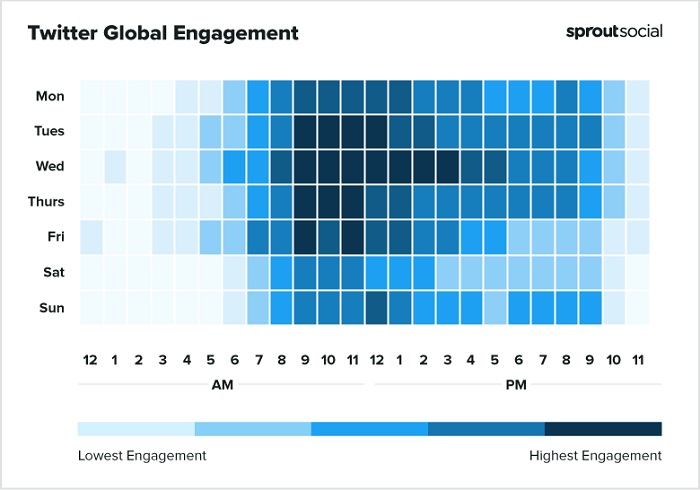 Sprout says that Wednesdays between 9 am and 3 pm are the best days to post your tweets, while Tuesday to Thursday between 9am and 11 am is also a high engagement time.

Twitter's stream moves faster, so you'll likely be posting multiple times a day, and it'd be interesting to match this data up to your own to see how that impacts your approach. If you see more engagement at specific periods, should you post more in those few hours, rather than spreading your tweets out over the course of the day?

Really, Twitter strategy comes down to experimentation - but again, these notes may provide some insight.

And again, weekends look bad for posting on Twitter. 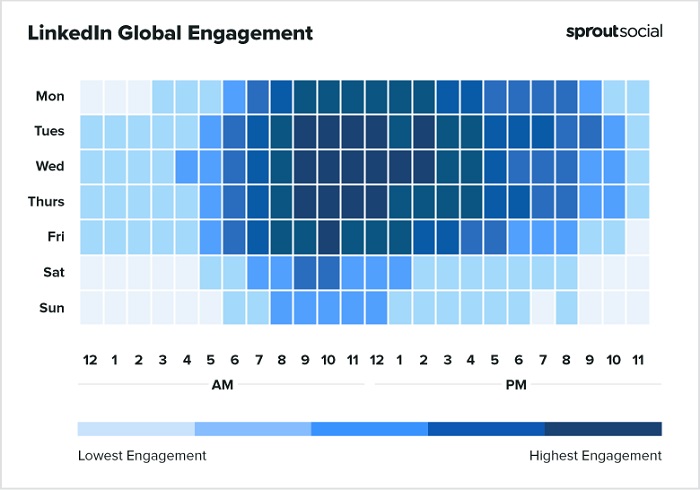 Sprout says that Tuesday through to Thursday between 9am and 12pm are the best times to post to LinkedIn, while again, the weekends are no good.

Which is interesting, because LinkedIn itself recently reported that Monday is the best day of the week to send an InMail, which is not the same as general feed engagement, of course, but you would expect to see some crossover there.

Still, these are times that Sprout Social users are seeing engagement, which points to when people are likely more active, and ready to engage with social posts.

Again, this may be highly relevant, or it may be nothing, as it does come down to your individual brand audience, and their specific usage behaviors. But if you are looking to map out a more effective strategy, these notes could provide a good starting point to begin your experiments. You can then optimize your approach relative to your own data findings and insights.

Sprout Social's full report also includes industry breakdowns and other trend notes which may help in your planning. You can read the full report here.