Snapchat has reported its Q2 2020 performance update, showing increases in both users are revenue, and, in general, positive signs for the ongoing steady growth of the platform.

First off, on users, Snapchat added 9 million new daily active users for the quarter, and is now up to 238 million DAU. 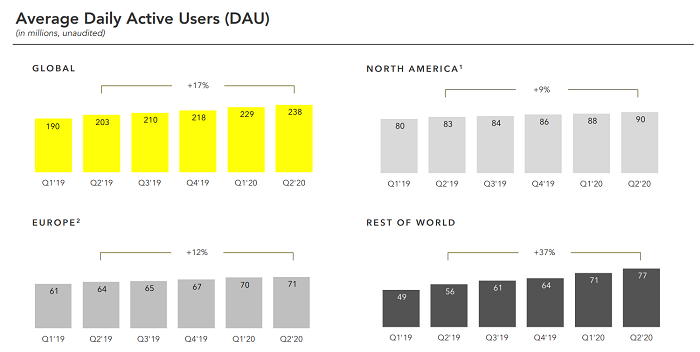 As you can see from the charts, Snapchat is seeing the most growth in the 'Rest of the World' category, adding only 2 million and 1 million new users respectively in the US and European markets.

Much of that growth, says Snap CEO Evan Spiegel, can be attributed to improvements in how Snapchat runs on different devices.

"We are continuing to invest in app performance and localization to make our service more accessible to people all over the world, with Snapchat now available to over two billion people in their native language. These efforts have helped us grow even faster in emerging markets like India, where we’ve seen over 100 percent growth in daily active users over the past year."

India, which is now the second-biggest smartphone market in the world (behind China), is dominated by Android devices, which Snap, for a long time, had largely ignored. In 2018, Spiegel publicly acknowledged the issues with running Snapchat on Android, which many had suggested had impeded the app's growth (and that Spiegel had ignored), and Snapchat launched a revamped Andoid app in 2019. Since then, adoption among regions like India has pushed the Snap's growth higher - this time around, beating analyst expectations.

But still, users in developing markets are not as lucrative as those in other regions.

The variable scales used in these graphs somewhat hides the fact that users in the 'Rest of the World' sector produced significantly less ARPU this quarter - down to almost a quarter of what North American users now generate. 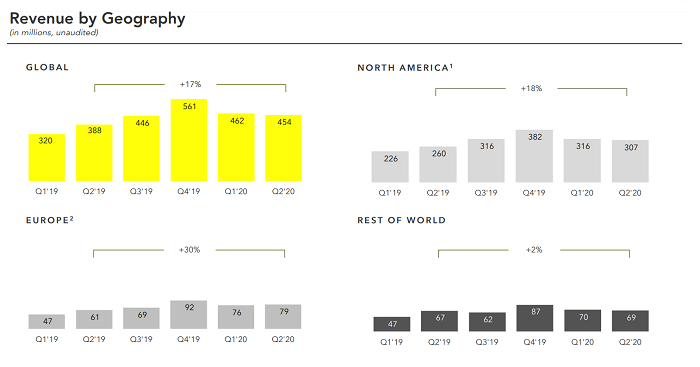 Given the current conditions, that seems like a solid result, but investors had been hoping for better numbers, and shares in Snap fell more than 6% in after-hours trading.

In his accompanying statements, Spiegel said that Snap is doing well, despite difficult market conditions.

"While our revenue growth rate continues to be impacted by ongoing market disruptions, the fundamentals of our business are strong, and the high levels of engagement on our service are backed by years of investment in our self-serve advertising platform, which is helping our partners achieve success and grow their businesses in this uncertain environment."

Interestingly, a big chunk of that engagement is coming from community created AR experiences.

"Today Snapchatters play with Lenses created by our community six times as often as they did just last year, and these Lenses now drive more than a quarter of all Lens engagement on Snapchat."

Snapchat has been working to better facilitate its AR creator community, with the addition of Creator Profiles last April, and improved discovery options to help creators maximize their on-platform presence. That approach has now also extended to brands, with Snapchat adding dedicated brand profiles earlier this month. 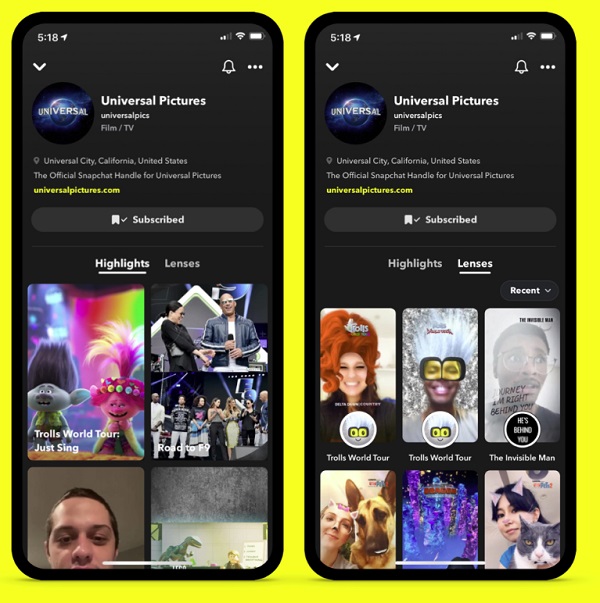 "Brands are starting to invest in Snapchat beyond advertising by building fun, engaging, and useful experiences for Snapchatters. The launch of Brand Profiles this month is a key pillar of this future. Today, our focus is on giving Brands a home for all the innovative AR experiences that they create, alongside their Stories. In the future, we believe that Snapchatters will engage naturally with businesses of all sizes across our service."

"In the U.S., our platform reaches 90% of 13-24 year olds and 75% of 13-34 year olds. This audience is critical for advertisers as the Snapchat Generation develops lifelong habits, but also because young people are focused on driving change in the world and building a better future."

At its partner summit last month, Spiegel noted that Snapchat now reaches more 13-34 year-olds in the US than Facebook or Instagram, which feels like an over-estimation, but maybe true at the same time? Like, it doesn't seem possible that Snapchat can serve less than a quarter of Instagram's total user base, yet still reach way more young people. But maybe? That's what Snap says, either way.

In addition to this, Snap also says that its Snap Original have found their niche, with some seeing tens of millions of views.

"For example, Will From Home, which culminated in a Fresh Prince of Bel Air cast reunion, was watched by more than 35 million people. Snap Originals continue to attract audiences that rival those of top TV series, and have reached more than 75% of the US Gen Z population so far this year."

It seems that younger audiences have warmed to the shorter, episodic nature of Snap Originals, which is a positive sign for the future of the app - especially if those reach figures are, indeed, correct. 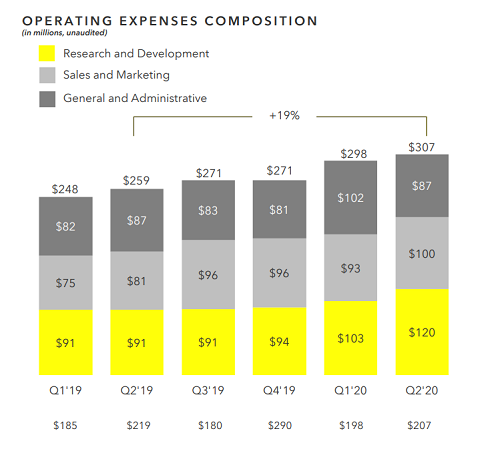 After slowing its investment on research and development last year, Snap added $9m in R&D spending last quarter, and another $17 million in Q2. What could they be working on? AR-enabled Spectacles maybe?

Overall, it's a mixed report for Snap - more users, more year-on-year revenue, but relative growth is difficult to judge in the current market conditions.

What is interesting in Snapchat's case is that it's been able to establish itself within its niche for more private social interactions with close friends.

When Snapchat rejected Facebook's $3b takeover offer back in 2013, Zuck and Co seemed determined to ruin the then-fledgling competitor, and with the arrival of Instagram Stories in 2016, it looked like it may have done just that, with Snap's growth grinding to a halt, and even declining in late 2018. But Spiegel and Co. have stuck to the app's core use case, and while the most recent revamp is clearly designed to attract more users through more user-friendly controls, Snap's growth has mostly come from being the anti-Facebook, the anti-Instagram. It's not about sharing your interests publicly, it's about maintaining more intimate friendships via the app.

With the broader trends of social engagement shifting towards enclosed sharing, Snapchat has ended up being ahead of the game - and while focusing on its niche will mean that it's unlikely to reach a billion users, if Snap can continue to build, it can remain a viable platform moving forward.