TikTok’s separate BeReal clone app is now available in regions outside the U.S., with people able to download ‘TikTok Now’ and get daily prompts to post a ‘Now’ clip, showing what they’re up to at a random time.

As per the Google Play store description of the app:

“TikTok Now is the new social platform from TikTok. Share your most authentic moments with the people who matter the most. TikTok Now lets you post a daily video or photo at the exact same time as your friends. You'll receive a random daily notification at the same time as your friends, giving you a 3-minute window to take a 10-second video or real-time photo using both the front and back cameras.”

Which, of course, is exactly like BeReal, with TikTok blatantly copying the BeReal model as it seeks to tap into the rising trend. 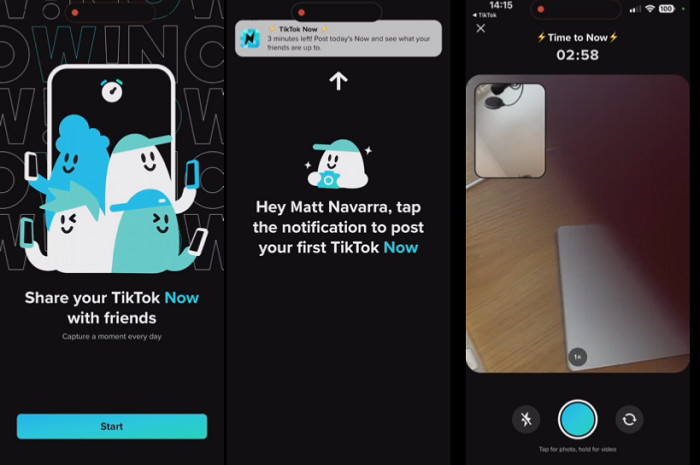 In the U.S., TikTok Now has been launched as a feature within the main TikTok app - which is an interesting approach, trying out variable approaches in different markets to measure interest in the option.

I mean, really, it would seemingly be of most benefit to TikTok to keep the functionality in the app, as that would then get more people using TikTok more often, where it can monetize them via ads, and help boost its market presence.

The separate TikTok Now app seems like an odd tactic in this respect - but then again, the cross-promotional value may help TikTok boost its presence, and connect more users through to its main platform, which will help to expand its overall presence.

Worth noting, too, that the vast majority of BeReal users are in the U.S., so launching a separate app in markets where BeReal itself has not yet gained a foothold could be a dilution tactic by TikTok, giving it ‘first mover’ advantage, despite replicating the app.

Either way, it’s not great news for BeReal, which has seen meteoric growth throughout the year.

Barely reaching 10,000 users a year ago, BeReal is now up to 10 million daily actives, while the app has reportedly been downloaded over 43 million times.

BeReal’s growth has actually surpassed the momentum trajectory of Clubhouse, which was the hype leader in social media circles last year. 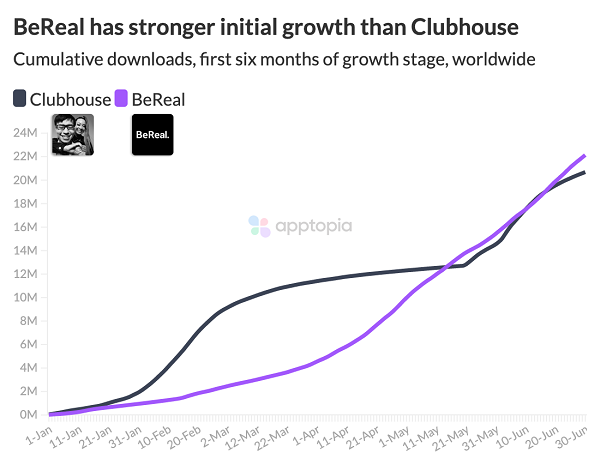 Which is an interesting comparison, not just in terms of raw numbers, but in terms of likely outcome, with Clubhouse eventually losing audience as its core features were replicated by other apps, and struggling to establish a workable monetization structure.

BeReal looks set to follow a similar path, with the platform now looking to potentially build in add-on subscription elements to avoid ads, in order to convert its popularity into an actual business. The challenge for BeReal in this respect is that it doesn’t command a lot of audience attention, in regards to time spent, so its only true, viable pathway to monetization would be via push notification ads, using the trust that it’s built with its daily updates for promotions as well, or sponsored placement in its prompts.

I suspect neither of those options would be popular with users, and eventually, as the hype dies out, BeReal will likely end up being a fad app – which is why bigger apps replicating its core features actually makes sense.

Even if you don’t like it. Sure, it seems a little cheap and nasty to steal ideas from other apps, but as other platforms would note, all the key functionalities in social platforms have been replicated over time, as each significant new shift marks a new UI benchmark that alters user expectations.

The news feed, reactions, Stories – everything that catches on becomes a habitual usage trend, which eventually makes sense as an addition to other platforms as well. It’s the great, social media circle of life, and within that, it’s difficult for smaller apps to gain traction, and take on the incumbents, who can easily replicate their key features and re-distribute them to their massive user bases.

I’m not sure that BeReal is going to make it through that gauntlet, with TikTok Now likely set to become a big challenger in markets outside the U.S.