Tying into the March Madness college basketball tournament, this month, Twitter has been running its first-ver 'Brand Bracket' competition, in order to determine the best-tweeting brand on the platform.

The competition pitted brand profiles head-to-head, and called on Twitter users to vote for the winners of each match-up, based on their tweeting prowess.

Entertainment Twitter goes head to head with Sports Twitter’s favorite brand for a chance at the title.

At the end of this, Twitter would then determine an ultimate champion - which, after 15 head-to-head battles, has now been revealed: 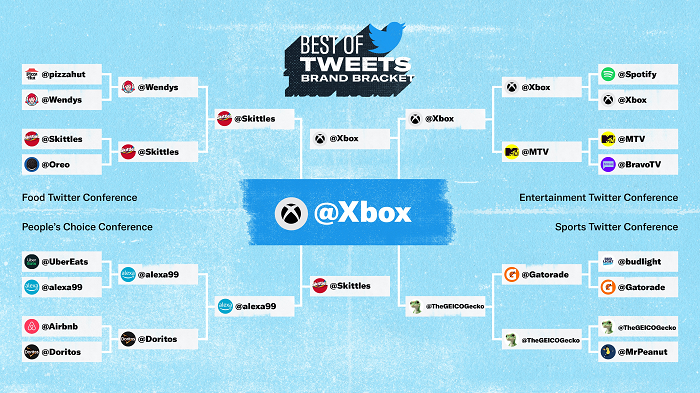 Yes, Microsoft's gaming arm Xbox has come out on top, with users recognizing its Twitter skills by marking it as the best of brand tweeters, after defeating Skittles in the final face-off.

"The matchups were heated. But hundreds of thousands of votes later, one brand left it all on the timeline FTW!"

Twitter says that the promotion saw significant support among the participating brands, with some even offering products tied into the event.

OK... here goes. Help us win this and we'll BRING BACK LIME SKITTLES! Yup, you read that right. Not an April Fools joke. Not clickbait. #Vote4SKITTLES now at https://t.co/gzvrD4E5GB#BestofTweets pic.twitter.com/IXRBJYWse4

But in the end, it was Xbox that came out on top. The company's Twitter handle boasts 15.9 million followers, and tweets more than 33 times per day, incorporating replies. In fact, replies is likely what wins it for Xbox, with its social media team highly active in responding to mentions on the platform.

But then again, maybe it was just the promise of an Xbox Series X mini-fridge.

What does that mean in the broader scheme of things, and from a social media marketing perspective more broadly?

Well, probably not a lot, really.

For Xbox, it gets the kudos of being 'the best tweeting brand', which it can use in promotional pitches, while Twitter will also be running digital billboards announcing the victory, which will feature fan Tweets, and will visit the neighborhoods of the winning brand's marketing team. Xbox will also get a special trophy to mark the win.

In terms of brand lessons, the key for Xbox, as noted, is likely its responsiveness, and willingness to engage with its fan community. Xbox's social team is very attuned to the latest gaming trends and memes, and being able to mobilize that fan base in a fan-voted competition was, no doubt, a big advantage.

There's no magic formula or secret tip in Xbox's success in this respect, but having the capacity to engage and stay connected to your fans can clearly pay dividends, at least in terms of brand and community building on the platform.