Have you ever wanted to remove a follower, or followers from your Twitter profile, without actually blocking them from following you again?

I mean, it is possible to do this already - by first blocking them, which removes them from your 'Following' group, then unblocking them again, which essentially cuts them off without making that action overt. But what if this was as easy as simply removing them as a follower, a sort of light-touch way of distancing yourself from that user or profile, without the potential drama of them discovering that you've exiled them from your presence?

That appears to be what Twitter is currently developing, with app researcher Alessandro Paluzzi posting several screenshots of the option in progress. 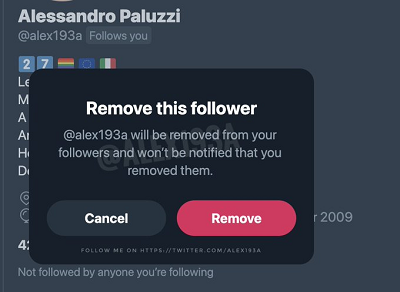 As you can see here, the new option would enable you to simply remove a follower, if you choose, which would stop them from seeing your tweets - though they would still be able to look you and your tweets up in the app, and re-follow you again if they choose.

Based on these initial examples, it looks like users would be able to use the remove followers option both from their main tweet feed and from specific user profiles direct, with a new 'Remove this follower' option displayed in the three dots tweet menu. 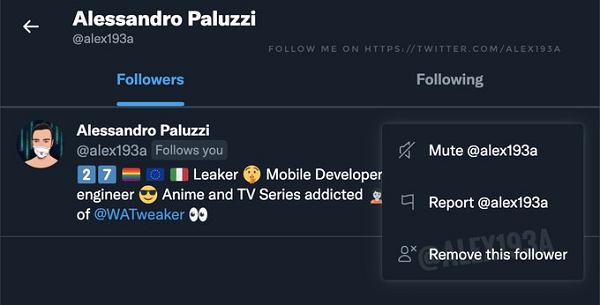 Which could have specific use cases. As noted, there are times when you might want to remove someone from your following list, but you may not want to block them, as such, and this could be a less confrontational way to avoid them, and ideally stop them viewing your future tweets.

Maybe they don't notice, and you can go on without them interacting with you in future, and they won't subsequently feel slighted about being blocked, as such. And if they do notice that they've been removed, you can just blame Twitter error, again reducing the potential affront of them discovering that you've cut them off completely.

But then again, if they do notice, and you really do want to cut them off, you may have to resort to blocking anyway - so in truly problematic cases, it probably doesn't add much. But maybe, in certain instances, it could be a better option,

And for brands, it could have specific use-cases and benefits.

It could be a particularly helpful option for businesses looking to refine their tweet audience, if you wanted to, say, remove profiles which are never going to be customers, and simply aren't contributing to your process.

By refining your audience, that could improve your Twitter outreach, and ensure you're reaching the right people with your tweets, while it could also be beneficial for follower look-alike targeting within your Twitter ads process. Get down to the right followers - those who are actually likely to be your customers - and your lookalikes will be even more effective, likely improving performance.

It might not appear to add a lot, functionally, given individual users can already, effectively do this, but there are specific advantages that could be gleaned by providing more capacity to remove unwanted followers from your profile.

The option is currently in testing - we'll keep you updated on any progress.