Twitter’s taking the next steps with its full-screen, video reply option, with the launch of a live test on iOS that will enable users to choose ‘Quote Tweet with reaction’ to create and customize a unique Tweet take. 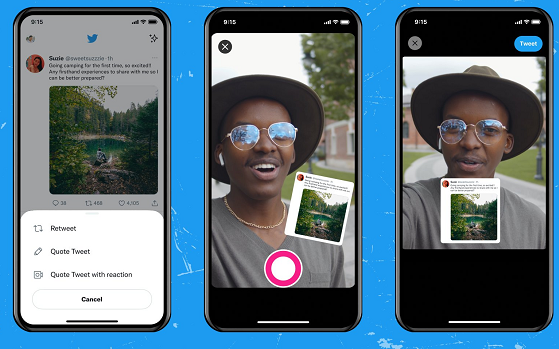 As you can see in this example flow, with the new option, users will be able to add a full-screen video or image to respond to a tweet, with the original tweet then embedded in the visual.

The option, which was initially spotted in testing last month, essentially takes the key elements from Fleets, its failed Stories clone, and re-purposes them within the regular tweet experience.

Along a similar line, Twitter’s also testing an updated text editor option for tweets, which would enable you to add more color and presence to your comments.

That puts more focus is on visual, engaging responses, which better aligns with evolving user behaviors, with TikTok now popularizing the full-screen, visual feed approach that all platforms are looking to adapt for their own purposes. And with Twitter also now displaying images at full-size in feeds, these new additions could be a great way to boost engagement and interaction, and shift the behaviors of tweet users towards more creative, colorful sharing processes.

Again, the influence of TikTok is clear, and with that app now on track to reach 1.5 billion users in 2022 – more than 7x Twitter’s current audience - that approach does make some sense.

Sure, it may feel a little out of place, and Twitter users didn’t care about Fleets, so why will they care about this? The reservations around the test are valid, but it could also be a good way to encourage new forms of tweet interaction, and keep more of that engagement on Twitter itself, as opposed to users re-sharing tweets on other platforms and reacting to them there instead.

And really, Twitter has to try new things. The platform’s working to add 50% more users over the next two years, and while new CEO Parag Agrawal will have his own ideas about stimulating growth, and bringing in more users, he has stated that he’s committed to achieving the company’s previously stated targets under Jack Dorsey, which also includes a significant boost in revenue over the same period.

That’ll be a big ask, especially given that Twitter has only added 12 million users over the past year. It’ll need to more than triple that growth rate to achieve its goals, which will likely see it push more new experiments like this in order to see what, if anything, sticks.

And this one does make more sense than, say, Fleets, which were an add-on to the traditional tweet experience. The problem with Fleets was that it took people out of the flow from the main, real-time feed, and maybe, by incorporating the same functionality into the regular process, that will make it more appealing.

Maybe. Time will tell, but you can expect to see these new, full-screen tweet responses infiltrating your timeline soon.