In these times of physical distancing, social platforms are likely to become an even more important element of our day-to-day lives, and tools which enable us to interact in real-time, simulating social elements as best as possible, will also come to the fore.

We've already seen Zoom take off as a virtual hangout tool, and other platforms are working to expand their live-streaming capacity and provide more ways to connect. And now, Twitter has updated its real-time video connection feature, adding a new option to add audio guests into your Twitter live-streams before you actually begin your broadcast.

Broadcast live with a little help from your friends, no matter where they are.

Now you can send invites to guests before you start your video!
???? Tap the compose icon, then the camera icon
???? Select “Live”, tap “Invite guests”, and choose your guests
???? Hit the "Go LIVE" button pic.twitter.com/4kr2KLUCGq

As you can see in the above video, now, when you go to begin your Twitter stream, you can invite up to three people to join as audio guests.

When you invite people to your stream, they'll get a notification via DM - Twitter says that it opted to send the invites to your DMs, as opposed to via a tweet, in order to allow for private conversation between broadcaster and invitee. 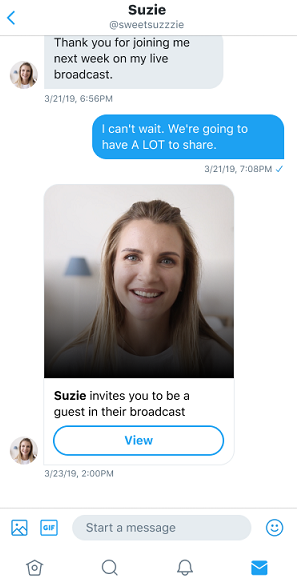 When the invitee taps on the 'View' prompt in their DM, they'll be taken to the live broadcast, with a translucent screen. Because guests need to have something to join, you won't actually be able to send the request to join your stream until you go live. So while you can invite people ahead of time, you'll have to begin your stream solo, then have the invitees come in. 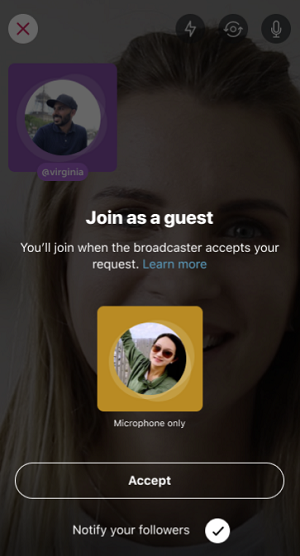 It's a relatively small addition, especially since you can't actually join as a video guest.

I noted the same when Periscope announced its audio guest functionality last year - while providing an option to add another person into your live-stream is a good move, having them as audio-only seems a little behind the times, and seems less likely to gain traction when users can access multi-participant video tools within other apps.

You can add live video guests to your Instagram Live broadcasts (though Facebook removed the option from Facebook Live last year), while you can also stream multi-participant video chats through the aforementioned Zoom and Houseparty. The problem with the latter two options is that they don't have the audience that Twitter does, if you were looking to showcase your stream, but you can still share relevant links to invite people to join or view.

Part of the challenge with live video guests, however, is that its expensive. Facilitating multi-video feeds comes with a lot of back-end costs, which is likely why Twitter has opted to stick with audio-only guests, as opposed to enabling split-screen participants. In the past, Twitter has said that it is looking into video guests in future, but right now, audio additions is the best you've got.

Which is still something - and again, in these socially restricted times, it could still be a big thing. But it would be better if there was video too.