The next phase of the audio social push is here, with Twitter announcing that its Clubhouse-like Spaces feature is now being made available to all users, on both iOS and Android, with over 600 followers.

Twitter Spaces is rolling out to more people! now everyone can tap in to join a Space and more of you can host pic.twitter.com/ReSbKTlDCY

That is a big expansion of Spaces, which, up till now, has been in limited test mode, especially on Android, which it started experimenting with back in March. The push to open up Spaces to Android users has been inspired, in part, by Clubhouse's lack of Android option, and this new shift will heap a lot more pressure onto the Clubhouse team.

And the 600 follower limit is also a clever, Clubhouse-inspired move.

"We’re bringing the ability to host a Space to all accounts with 600 or more followers on Twitter. Based on what we’ve learned so far, these accounts are likely to have a good experience hosting live conversations because of their existing audience. Before bringing the ability to create a Space to everyone, we’re focused on learning more, making it easier to discover Spaces, and helping people enjoy them with a great audience."

Opening up the option to millions of new users who have 600 or more followers essentially suggests that Twitter could open it up to everybody straight away, as it's not technical limitations that are restricting its expansion, as is the case with Clubhouse.

Which makes sense - Spaces is built on the existing Periscope infrastructure, so it's not incredibly difficult for Twitter to provide support for audio rooms quickly, and for all users - but by limiting it to certain accounts, it adds a level of FOMO and exclusivity, which will likely make those who do have access more likely to host their own Spaces and test it out, while it builds excitement among those without access before they too are able to create their own.

Which has been a key element in the Clubhouse hype machine. Clubhouse gained significant traction, early on at least, by being the place to be, an invite-only exclusive for the coolest of people who were able to secure a much-coveted app invite.

But now, that approach also become a crutch. With Clubhouse downloads slowing, and Twitter now getting to Android before it, the app is now at significant risk of losing its grip on the trend that it began.

Will potential Clubhouse users who can now start their own Spaces on Twitter even bother downloading the app? Will big broadcasters who've already build large audiences on Twitter be as keen to broadcast in Clubhouse, to much smaller crowds, when Spaces is available instead?

There are definitely some signs that the Clubhouse hype train is slowing down. Over the weekend, I noted that several big name audio broadcasts were held on Spaces instead of Clubhouse, which seems significant. 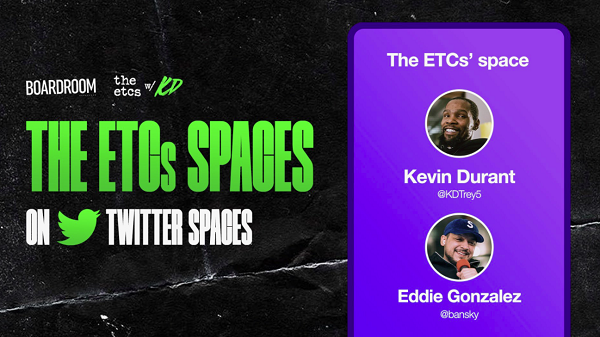 The expansion of Spaces to all users only looks set to exacerbate that trend.

In addition to making Spaces available to many more users, Twitter has also announced a new ticketed Spaces option, which is currently being tested with selected users. 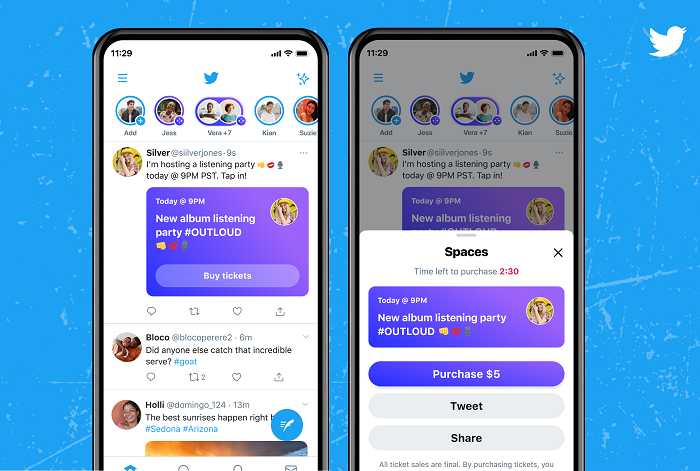 "Hosts put time and effort into creating space for conversation, connection and fun. Now, we're working on a way for hosts to be rewarded for the experiences they create by getting monetary support, while providing listeners with exclusive access to the conversations they care about most."

Twitter says that Spaces hosts will eventually be able to set ticket prices, and how many are available to sell.

"A limited group will be able to host Ticketed Spaces in the coming months. Hosts earn the majority of the revenue from ticket sales and Twitter will keep a small amount as well."

That aligns with Twitter's broader shift towards providing more ways for users to monetize their Twitter presence, which also includes its new 'Super Follow' experiment and paid newsletter subscriptions (via its Revue acquisition).

These elements are still in development, but it could eventually provide more incentive for people to maintain their on-platform activity - while it also, again, is likely to put more pressure on Clubhouse as users will be able to generate a lot more income via the much broader audience reach of Twitter, even as Clubhouse looks to add its own room monetization tools.

Twitter's also rolling out Spaces scheduling, and reminders for Spaces in the coming weeks, helping to keep more of your audience connected. 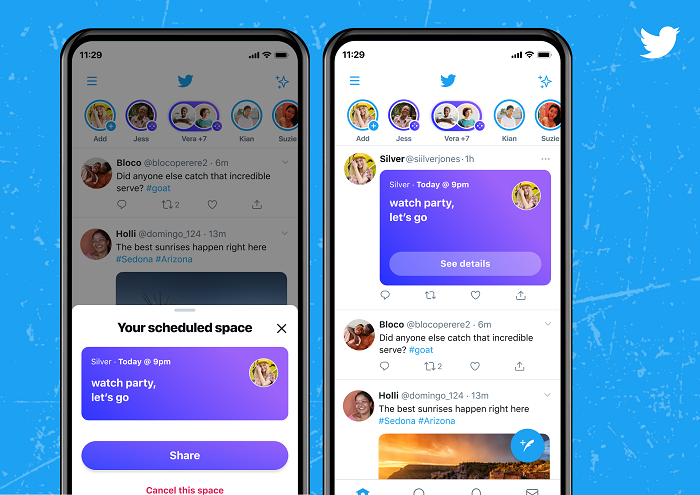 While it's also working on accessibility improvements, including improved captions and labels, as well as improved Spaces discovery options - like the capacity to tap into an in-progress Space by highlighting when any user is hosting an audio discussion with a purple bubble around their avatar in-stream. 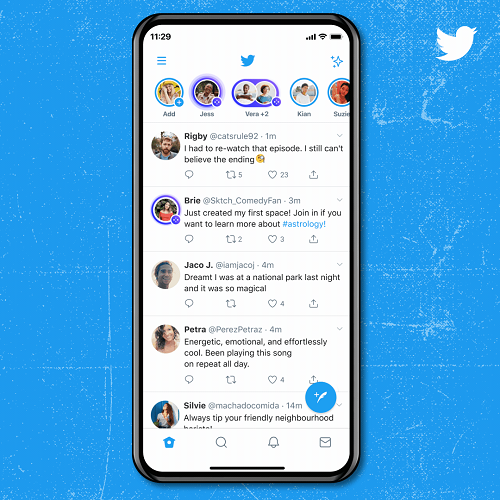 Twitter has a way to go in maximizing Spaces discovery, which will be key to tapping into the full, serendipitous nature of Clubhouse, which facilitates improved discovery by enabling users to move through its various in-progress audio rooms. If Twitter can add a better overview of in-progress Spaces, so people can tune in at any time, that will be another big step in further advancing the option, and making Spaces the place to be.

Which it will need to work on, because while this new update gives Twitter more room to take on Clubhouse, and likely puts it ahead of Clubhouse in many ways, Facebook is also investing big in audio social, and its new tools also look set to take a large chunk of listeners away from competing apps.

But then again, where Facebook's audio tools appear likely to win out is in Groups and more specific, niche discussion, because as we've seen with Facebook Stories, users are not overly interested in broader scale engagement tools in the app, at least not in the same way they are on other platforms. That could mean that Instagram's new audio IG Live option also becomes a strong contender, but right now, I would bet on Twitter Spaces becoming the most important tool of the new audio social race, given its reach and presence, and the app's overall alignment with real-time discussion and engagement.

The real question is whether Twitter can successfully monetize the option, because while Twitter has become synonymous with real-time events, it's yet to show that it can effectively monetize that positioning, and make it into a business element.

It has a real chance with Spaces, and by incorporating paid events from the start, it could also mark a new approach for Twitter as it looks to merge into more revenue-based tools and options.