Twitter has shared its latest performance update, showing an increase of 12 million more daily active users, and a 28% YoY increase in revenue for Q1 2021.

First off, on users - Twitter is now up to 199 million Monetizable Daily Active Users (mDAU), regaining its growth momentum after it slowed in Q4 20. 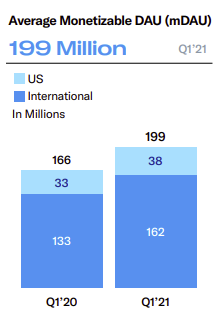 I'm not sure about these more confined comparisons - Twitter sometimes tries to mask potential growth concerns by limiting the scope of its charts, so you can only see the YoY numbers.

Here's a look at mDAU counts over the past five quarters for a better view of Twitter growth (I've put the data together in the last bar chart, so it looks a little different). 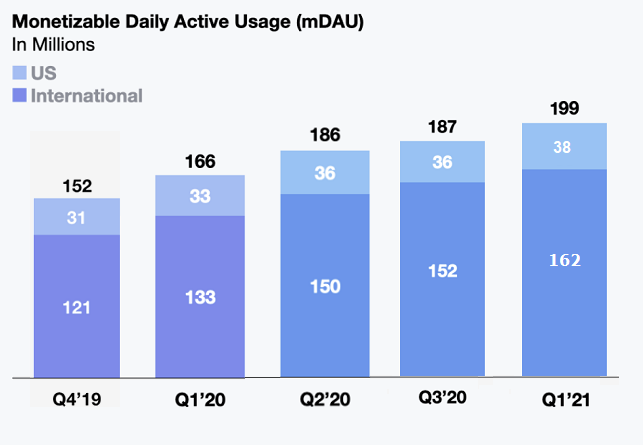 As you can see, Twitter is growing at a steady rate - though not sure about their math skills. 162 + 38 does not equal 199. Must be a rounding error.

Twitter says that its usage growth was driven by "ongoing product improvements and global conversation around current events".

US mDAU grew by 13%, while international usage rose by 22%, with Twitter still seeing solid growth in Japan, and expanded usage in India, as more Indian users continue to come online.

Though that has also caused problems more recently, with Twitter clashing with Indian authorities over attempted censorship. Even so, the growth in both international and US markets is positive, and will help Twitter establish a more stable, ongoing business as more brands look to connect with users in different regions. 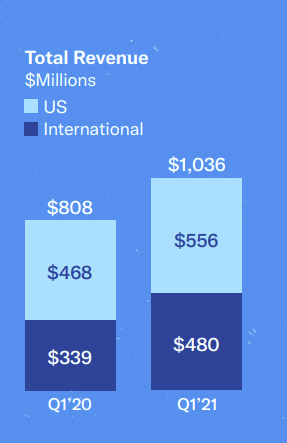 That could, however, be impacted by Apple's IDFA update, though Twitter has been working to prepare for such, through integration with Apple's SKAdNetwork.

"While it is still too early to understand the full impact of Apple’s iOS 14.5 changes, our integration with SKAdNetwork has allowed us to reach a new audience, increasing the total number of iOS devices to which we can advertise with MAP ads by 30% while maintaining cost-per-install performance."

Twitter doesn't expect the IDFA change to have a major impact for its ad partners, though like all platforms, it needs to wait and see before it can measure the impacts. That may pose a problem moving forward, but if it is, all digital ad providers will likely experience the same, which may soften market response.

The numbers look good, and point to growing evolution at the platform, though Twitter's cost of revenue has also seen a significant jump. 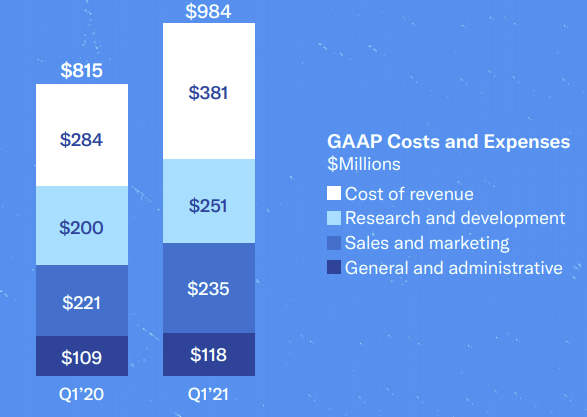 Twitter says that research and development expenses grew 25% to $251 million, "primarily due to higher personnel-related costs as we continue to focus investments in engineering, product, design, and research".

Twitter has been hard at work developing new product offerings, like audio Spaces and new 'Super Follow' options to provide financial incentive for creators. In addition to this, Twitter also acquired newsletter platform Revue, and development platform Reshuffle in the period, adding to its costs.

And it'll be looking to spend more on development moving forward, with a range of new options, like business profiles, currently in the works, while newer tools like Communities and the expansion of topics will also require added investment.

Twitter also shared that it now has more than 6,100 employees worldwide, a 20% YoY jump in overall staffing.

In looking at its key wins for the period, Twitter says that Topics has seen good take-up among new users, helping to guide them to more relevant tweet content.

Twitter says that it now has more than 7,000 Topic options, across nine languages, which it's continually expanding, and recommending to users, as a means to boost engagement and time spent.

Yet, at the same time, Twitter has warned of unpredictable performance comparisons moving forward.

"Looking ahead, the significant pandemic-related surge we saw last year creates challenging comps, and may lead to mDAU growth rates in the low double digits on a year-over-year basis in Q2, Q3, and Q4, with the low point in terms of growth likely in Q2."

In other words, like all digital platforms, Twitter saw a big usage jump last year, which will make the numbers this year seem less favorable - but you're really looking at a two-year growth basis, as opposed to seeing a jump from 2020 to now.

Overall, it's a good report for Twitter, with growth continuing, despite concerns about a post-Trump slump.

If anything, the numbers show that the so-called 'Trump effect' on Twitter wasn't as significant as many expected, with the platform's focus on key growth areas and new product additions yielding good results as it continues to invest.