After testing them out over the last few months, Twitter has today announced that its new tweet reply control options are being made available to all users on iOS, Android and twitter.com.

"Here’s how it works. Before you Tweet, choose who can reply with three options: 1) everyone (standard Twitter, and the default setting), 2) only people you follow, or 3) only people you mention. Tweets with the latter two settings will be labeled and the reply icon will be grayed out for people who can’t reply. People who can’t reply will still be able to view, Retweet, Retweet with Comment, share, and like these Tweets."

As noted, Twitter began testing its reply controls with selected users in May, and since then, Twitter says that it's seen the tools used to conduct interviews, panel discussions and more, expanding the potential usage options for tweets.

Twitter also notes that users in the test pool have said that they feel more comfortable tweeting, and more protected from spam and abuse, which has lead to them tweeting longer, more in-depth thoughts, particularly on sensitive subjects.

"People who face abuse find these settings helpful – those who have submitted abuse reports are 3x more likely to use these settings."

​That's a good outcome, but there is another concern, which is that by limiting who can respond to tweets, politicians and brands will theoretically be able to silence opposing viewpoints, which could make their statements appear more accepted than they actually are.

Yet, even so, Twitter's also working on improving its labels for reply-restricted tweets, in order to ensure that users are fully aware of what's happening, and who can engage directly with each. 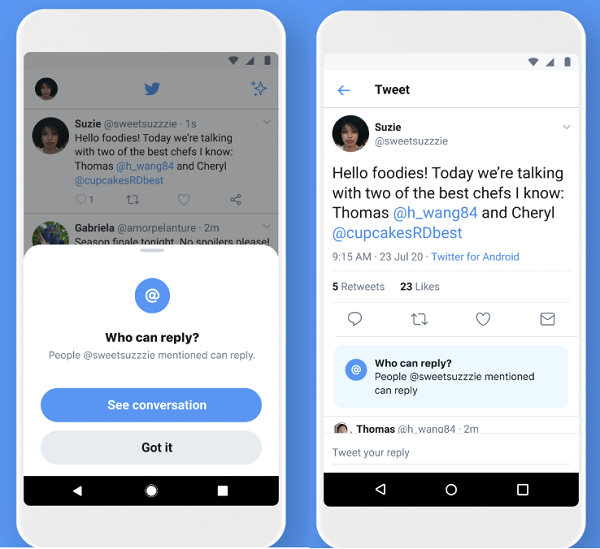 Twitter's also working on additional improvements for the option, including the capacity to invite people into the conversation after it starts, which could enable users to build on engaging discussions over time, without having to begin a new thread.

It seems like an interesting option, and the early notes suggest that there's a general understanding of how the process works, which should limit abuse. And that could, as Twitter notes, lead to more tweet use cases - the original use case for this specific option was a one-on-one interview conducted via tweet, which was almost impossible to follow because the hashtag stream got so cluttered with replies and reactions.

Now, by limiting replies, you could hold a more intimate discussion, which others would be able to more easily follow - in addition to the capacity to stop unwanted responses to your tweets.

It'll be interesting, now, to see whether these early usage trends hold on a broader scale.

The new tweet reply controls are available to all users from today.