No one cared much about Fleets, Twitter’s take on the social stories trend, but as part of its announcement when it shut down the option back in July, Twitter did note that it would be looking to incorporate Fleets elements in other areas of the app, which has already seen the addition of new camera options and editing tools.

And this could be the next step, with Twitter testing a new ‘Quote Tweet with reaction’ option that would enable users to capture a response to a tweet via the full-screen camera mode. 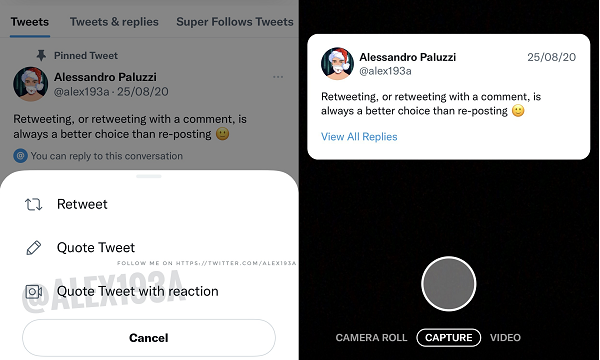 As you can see in this example, shared by app researcher Alessandro Paluzzi, as it currently stands (not in live testing as yet) the new option would provide another way to facilitate direct, visual engagement via tweets, by attaching the original tweet as a sticker to your captured image or video, which would ideally help to expand the platform beyond basic text replies.

Twitter’s also testing an updated text editor option for tweets, which would enable you to add more color and visual presence to your comments.

The focus, again, is on more visual, engaging responses, and with Twitter also now displaying images at full-size in feeds, each could be a great way to boost engagement and interaction, and shift the behaviors of tweet users towards more creative, colorful sharing processes.

That UI, clearly inspired by TikTok, is Twitter’s attempt to align with evolving social media usage trends. And while Fleets, with its similar full-screen display, failed to capture user attention, maybe these options could add more ways to utilize tweet creative, and generate more response to enhance engagement, and spark increased interest in alternative display uses.

Which Twitter is would love to work out as it continues in its path to 315 million active users by 2023. That’s the growth target that the platform outlined back in February, as part of its Analyst Day presentation. And while the company has had a change of management since that presentation, new CEO Parag Agrawal has said that he’s committed to achieving its previously stated targets, which also includes a significant boost in revenue in the same period.

Which means that Agrawal has some big decisions to make, on several fronts.

Is Twitter Spaces catching on, and worthy of its own tab in the app? Is Twitter Blue enticing enough as a subscription package to keep people paying long term? Is Twitter doing enough with its Professional Profiles and creator tools, and are there more opportunities to explore on each?

These are just some of the innovations that Twitter has rolled out over the last year, as part of its increased focus on development. And while it is indeed launching and trying out more things, the actual value of each seems limited, at least in their current forms.

Is there more to each that can really boost their usage, or will Agrawal take things in an entirely new direction in the new year?

Maybe these new tweet display options are just the beginning of the next big push from the company, which could see it move more towards visual engagement, and making video a bigger focus in 2022.

It’ll be interesting to see what influencer Jack Dorsey actually had in this respect, and how the company looks to move forward in its next era.