You might think that with the Elon Musk takeover of Twitter pending, that it’s currently in a state of pause as it awaits news on what comes next.

You would be wrong.

As evidenced by current CEO Parag Agrawal’s recent management reshuffle, Twitter is still pushing ahead, even with major changes likely on the way in the Elon era.

It’s still experimenting with new features too, with the latest update in testing being new tweet labels that could be added to tweets to provide more context around certain engagements. 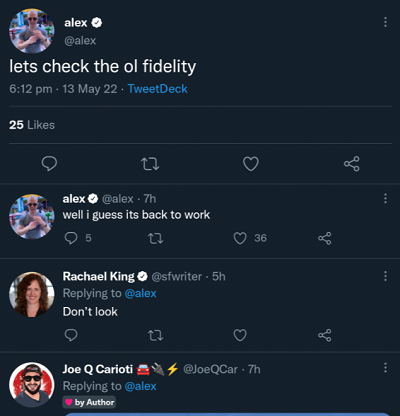 As you can see in this example (in the bottom reply), shared by TechCrunch, Twitter’s working on a new, in-stream label that would signify when a tweet author has liked a reply.

In a similar test, Twitter’s also now highlighting some tweet author replies, with an alternate text color and a microphone icon next to the comment.

Which Twitter’s been working on, in varying form, since 2018. Maybe it was a pet project of Agrawal in his previous role as CTO at the app.

The idea is that this will prompt more engagement by alerting users to comments that the author has found most relevant, while also giving fans more recognition in comment streams.

Recognition is a big element of the social media experience for fans, and by better highlighting such interaction, that could become a community building tool, which might even prompt more famous people to interact in the replies more often.

Because we all know that famous people aren’t using the app. That’s what Elon Musk told us a few weeks ago, among his various criticisms of the app of things that he’ll be looking to fix.

Since then, Musk has floated various vague solutions, including making people pay for embedding tweets by high profile users. Which seems utterly unworkable, while also overvaluing tweets, from anyone - but still, it’s one of the areas that Musk has in his sights for his grand Twitter revival plan.

Outside of that use case, however, I’m not sure this feature would add a lot, with the additional signifier unlikely to play a big role in… well, anything.

But any extra engagement is a positive, and with Twitter’s current projects, as Agrawal recently noted, failing to ‘hit intermediate milestones that enable confidence’ in reaching its growth goals, it needs to keep throwing things at the wall, in the hopes that, cumulatively, they provide some benefit.

Another, similar tagging project on this front is its ‘vibes’ status update experiment, which would see a custom status indicator attached to your tweets.

That also adds more context to the tweet experience, and it could come in handy for those attending events, in particular, with attendees, at present, often putting event hashtags on the end of their username to alert people to their participation.

I mean, that hasn’t been a big concern over the last couple of years, with virtually every event canceled, but that appears to be the primary use case, with all of these elements helping to provide more engagement prompts within different aspects of the app.

Again, they don’t seem like they’ll shift the needle much on engagement, but maybe, altogether, they will - and if Twitter’s working on them now, it might as well push them out, before Elon steps in and changes everyone’s focus onto incorporating more memes, or adding ‘4/20’ references into the back-end code, or eliminating algorithms altogether, to improve… something.

Essentially, everything is in flux at Twitter right now, but that might still see it push out a few more tweaks and experiments before its next stage.