Twitter Spaces increasingly feels like a niche offering – highly valuable to those that use it, but the group of those who do regularly tune in seems to be getting smaller, as opposed to expanding overall Twitter usage.

But still, for those that are using Spaces, they evidently do use it a lot, with a key feature request being the capacity to schedule multiple Spaces at one time.

Which you can now do, with Twitter enabling broadcasters to schedule up to 10 Spaces at a time, up to 30 days in advance. 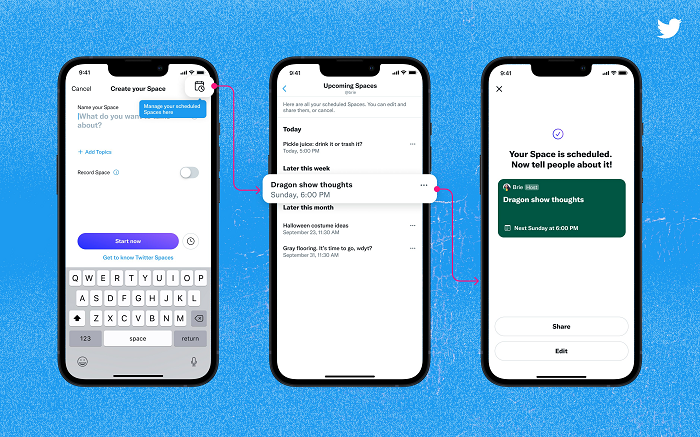 As you can see in these examples, you’ll now be able to access a listing of ‘Upcoming Spaces’ in the app, from which you can edit any of your planned sessions, or share them via tweet.

To be clear, you’ve been able to schedule a Spaces broadcast for over a year, but now, you’ll be able to plan out multiple sessions all at once. So if you are among the Spaces advocates that are spending hours tuning in each week, you’ll now be able to build that into your planning, and keep your audience more informed of your upcoming audio events.

Despite interest in social audio declining overall, after the sudden Clubhouse-led boom last year, Twitter has remained committed to Spaces development, adding a range of new features and tools to help improve Spaces functionality, while it also seeks to connect users with more relevant broadcast notifications via the Spaces tab.

Which is now being renamed the ‘Audio’ tab, after Twitter announced the addition of podcasts in the Spaces tab listings last month. 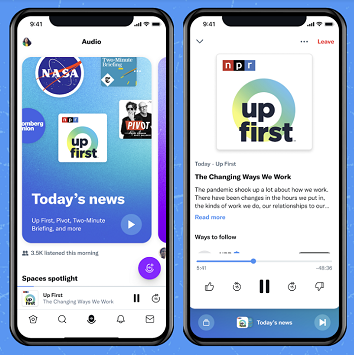 That could actually provide a key way to improve the Spaces experience, because it will better enable Twitter to categorize Spaces broadcasts alongside established pods, maximizing exposure and helping to highlight more relevant Spaces and hosts based on topics – with podcasts and Spaces being shifted into ‘Stations’ within the audio tab.

Because right now, Twitter’s Space recommendations are pretty much a mess: 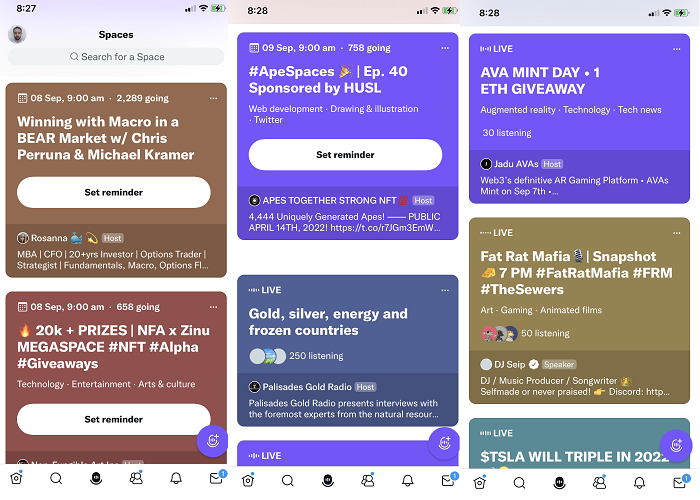 This is from my Twitter app, at 6:30pm ET (8:30am in AUS), and as you can see, the listings are mostly NFT/crypto-related. There were a couple of sports and more general discussions further down the list as well, but overall, Spaces is clearly dominated by niche interests.

Which may well be good for Twitter, and a valuable addition to the tweet experience. But it’s not great for attracting a wider pool of listeners, or indeed, highlighting more specifically what each individual user might be interested in.

Essentially, if you’re not into these topics, and Twitter’s not able to better categorize and filter its Spaces listings, you can imagine that users will simply stop checking that tab eventually, which is a failure on Twitter’s part to connect users with the most relevant content.

Merging in podcasts could help with this, and that could also help to show other potential broadcasters how they could get their content displayed within these topic-based ‘Stations’, and help them reach new audiences with its audio broadcast tools.

In this sense, Spaces scheduling could also play a big part in attracting new listeners.

I remain unconvinced that Twitter will be able to maximize the potential of Spaces, based on its past struggles with algorithmic recommendations (see also: the topics Twitter shows you in ‘Explore’ or its highlighted ‘Who to Follow’ display). But maybe, it can still become a thing – and really, if real-time audio was going to work anywhere, Twitter would be where it’s at.

But many thought that about live video too, which, in retrospect, showed the likely trajectory for the social audio trend.