Back in February, at its Analyst Day event, in which Twitter outlined its plan to add 123 million more users over the next three years, it also shared the first images of its coming 'Super Follow' option, which will give creators a way to monetize their Twitter presence by charging a monthly fee for exclusive, members-only features, which could include newsletters, special content, discount codes, etc.

Now, we've got some more insight on exactly how the Super Follow process will work, and how people will apply, with reverse engineering expert Jane Manchun Wong uncovering new screenshots of the option from the back-end code of the Twitter app. 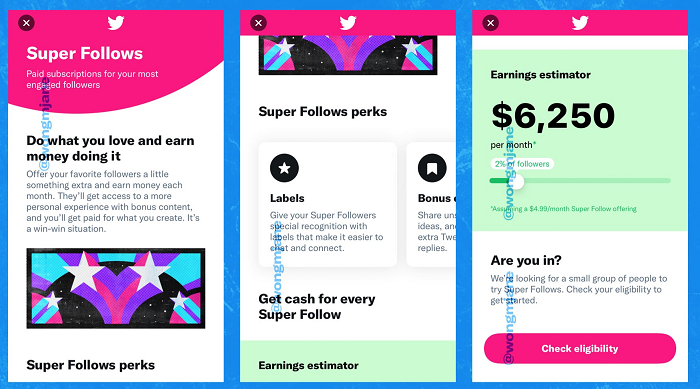 As you can see here, selected users will soon get a new notification that they can access the Super Follow option, which will lead them into this new welcome flow.

As the explanation reads:

"Offer your followers a little something extra and earn money each month. They'll get access to a more personal experience with bonus content, and you'll get paid for what you create. It's a win-win situation.'

The current Super Follows 'perks' as Twitter calls them are:

As you can also see here, Twitter will also display an 'Earnings Estimator' to lure creators in, with a slider that shows how many of your followers you would need to sign-up to make X amount of money, based on a $4.99 per month fee.

Which will no doubt prove to be a strong incentive  - but before you start counting your millions, there are a few requirements and other provisos within the process that may limit your revenue potential, or could even disqualify you entirely right off the bat. 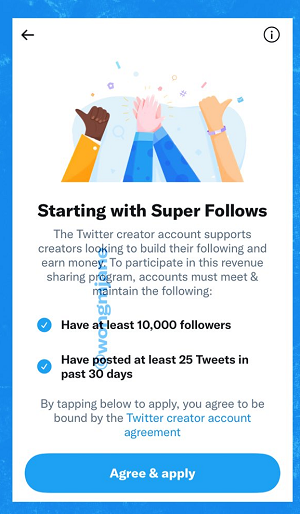 As you can see here, first-up, to be eligible to apply for the new Super Follow option, you'll need to have at least 10k Twitter followers, and you'll need to be posting on a regular basis - at least 25 tweets in the previous 30 days.

Which is not a massive amount of tweet activity, but the 10k threshold will cancel out a lot of users - and worth noting, too, that this has not been officially released by Twitter as yet, so we don't know how limited it will be to start with, and how much testing Twitter will need to undertake before letting all users with 10k+ followers sign-on.

The main point to keep in mind, however, is that you will need to provide a reason for your followers to subscribe. You likely won't be able to just keep tweeting like you always have, and expect people to pay out of the kindness of their hearts. Some of your followers might, but the majority will be expecting something more for their cash, something extra, so if you are thinking about how you might be able to use this option, when it does become available, you need to be planning for what you'll be offering, in addition to your regular tweets and content.

The application process itself asks for a content category in which your account fits, and an overview of how you plan to use the option to enhance connection with your fans. 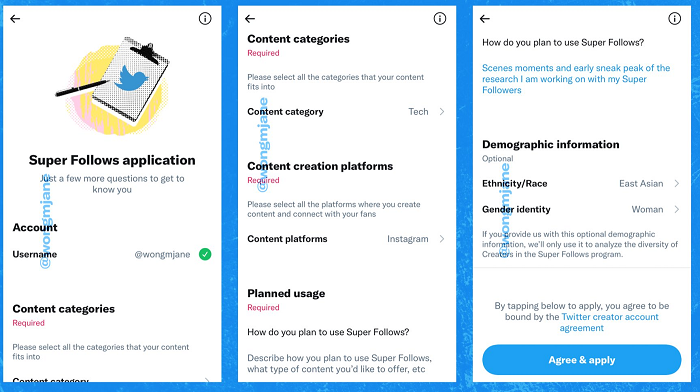 There are currently around 30 categories to choose from, including 'Art', 'Beauty', 'Gaming', 'Skincare' etc.

And as Wong notes, there's also, interestingly, an 'Adult Content' category, while in the section where you can identify the platforms where you currently create and post content, you can also choose 'OnlyFans' as an option. 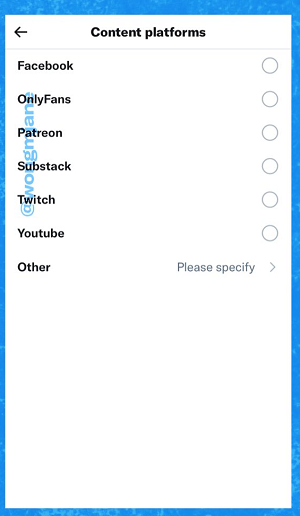 But then again, adult content is fairly easy to come by on Twitter already, so it may just provide another way to help manage that more effectively, while also generating revenue from the same.

The revenue split for Super Follows hasn't been shared as yet, but the expectation would be that Twitter would be taking a percentage of each subscriber payment, with the creator pocketing the majority - though there will also be some query around how much Apple and Google take, based on the additional App Store charges for such transactions.

This came up recently, with Twitter's new ticketed Spaces option, for which Twitter is taking a 20% cut from each ticket sold. Tech analyst Ben Thompson noted that creators would actually only end up taking in around half of the money from each ticket sold, due to additional hosting fees:

"A creator sells a Ticketed Space for $5. The creator, who people are willing to pay for, gets $2.80, while Twitter, who facilitated the connection and created the product, gets $0.70. Apple/Google, who leverage OS API control into a tax on all activity, do nothing and get $1.50."

Because of the way the relative app hosting process is set up, Apple and Google still take in charges from any subscription facilitated within their systems, which could put a further dampener on your hopes of becoming a Twitter millionaire. We'll have to wait for more info on this front to clarify, and also see if these additional charges are being factored into Twitter's earnings estimator tool in the Super Follows introductory process.

But these considerations aside, this could be another way for Twitter to keep its most high-profile users tweeting more often, while also providing an additional pathway to the company to boost its revenue intake, significantly and quickly, which could be a big help as it seeks to meet its ambitious growth targets.

As we noted recently with the launch of Twitter Blue, its new, paid option which will provide subscribers with additional tweet options - even if only 1% of Twitter's active users sign-up to pay the monthly fee for add-ons like undo tweets and new color tools, that would still equate to around $7 million per month (+$21m per quarter) in direct revenue for the company, straight up.

Super Follows will provide another lure, and it won't take a lot for it to be a valuable addition for Twitter, while also providing yet another pathway for creators to make money from their tweet efforts, making it a bigger consideration as they look to build their presence.

As such, it's a good option for Twitter, and it looks like it's headed for live testing very soon. We've asked Twitter for more info on Super Follows and we'll update this post if/when we hear back.