Following Facebook's lead, Twitter is now taking the opportunity afforded within Apple's iOS 14.5 data tracking prompt process to show users its own explanatory message about why they should let it keep taking in their in-app data, and the benefits of such for their usage. 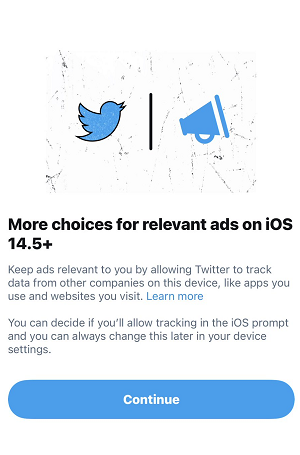 As you can see in this example, shared by social media expert Matt Navarra, the new prompt explains that by allowing Twitter to keep tracking your data, that will contribute to you seeing more relevant ads, while tapping through on the 'Learn more' prompt takes you through to Twitter's iOS 14.5 explainer on its Help platform, which provides a general overview of the process.

The new explainers will be shown to users before they're subsequently shown the new Apple data tracking option prompt, where they'll be able to cut off each app's data access. Within its new process, Apple has given developers this last pitch option to provide more context on such, which some are using to try and spook users into leaving things as they are.

Which is the case with Facebook. As you can see below, Facebook's own explainer alludes to Facebook potentially becoming a paid app if people don't let it keep tracking their usage data.

Which is not even in consideration - but still, Facebook, reportedly, has the most to lose from users switching off data tracking, and as such, The Social Network has been doing all it can to first stop Apple from enacting the change, and then, to stop users cutting off its data access.

In this context, it's true to form that Facebook's explanation is more inflammatory - but it is worth noting that Facebook's not switching to a paid app. Facebook CEO Mark Zuckerberg has repeatedly reiterated this, again and again, over time.

You can dispel that if any of your friends or relatives hit you with this example.

So will Twitter's new explanation be effective in stopping people from cutting off data access?

I mean, probably not - it more likely depends on how spooked users are by the listing of data points that each app tracks, which can be viewed in the new iOS app listings.

That's likely to be the real deal maker/breaker here, and as people share and discuss about these new tracking measures, that'll likely freak people out even more, and lead to more cutting apps off over time.

It's doubtful that Twitter's own explainer will add much to the decision-making process - but then again, with Twitter, like all apps that rely on ad revenue, set to feel the impacts, it needs to do whatever it can to negate its losses where possible.

So it makes sense that it's adding an explainer, but it doesn't seem like it's going to have a major effect.

We'll have to wait and see as time goes on, but early data has shown that a lot of people are, indeed, cutting off app data access as a result of the iOS update.