Twitter's slowly but surely looking to add more visual sharing options to its Stories-like 'Fleets' tool, with its latest experiment being a new option that would enable users to add a background video or image via their device camera or Camera Roll when re-sharing a tweet in a Fleet.

Twitter is working on the ability to capture to add custom background to a Fleet pic.twitter.com/A35er5Av1l

As you can see in this example, shared by reverse engineering expert Jane Manchun Wong, in this experiment, when a user goes to share a tweet via Fleets, they are then able to add in either an already captured image/video as a background, or create a new one, which can add more context to a Fleet response. Currently, users can only use a default, colored Fleet background when sharing a tweet.

In response to Wong's discovery, Twitter designer @shuangsta provided some further context on this experiment, and examples of where it might be used, essentially outlining how the option could enhance your Fleet engagement options. 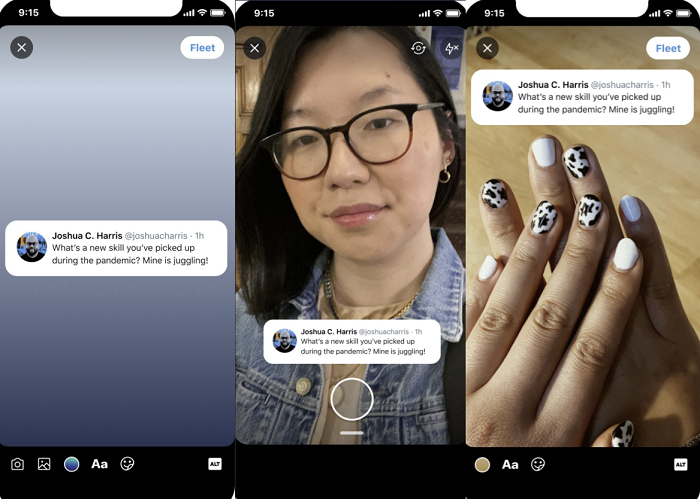 As you can see in this sequence, when replying to a question posed in a tweet, this new option would add camera and camera roll access icons into the Fleets composer tools (there's also a new stickers option in this example). That would then enable more visual response, and new ways to engage via Fleet.

"Capturing directly on Twitter enables off-the-cuff responses and commentary, while adding from the media gallery supports fun use cases like memes, for the Extremely Online."

That's an interesting, and logical enhancement for Fleets, and while the feature still lacks the AR filters and visual tools available in other Stories variants, Twitter is, as noted, working on these as well, which could eventually make Fleets a better sharing option, and a potentially valuable add-on for your Twitter engagement process.

This new experiment underlines the possible add-on value here, with this new process providing another way to build on the normal Twitter experience with enhanced connection tools. That could be great for brands looking to prompt more visual engagement and UGC, giving people a chance to, say, showcase how they use a product or share their talents/skills in response to a campaign.

It's still in test mode, but it looks like a good option, which would be another step in building out the Fleets experience.