Twitter's Updating its Limits on Third-Party Usage, Which Could Impact Social Management Platforms

Following on from Twitter's decision to revoke access for a range of well-known third-party tweet management platforms back in February, the platform has now announced a new review of its API usage regulations, which could see another raft of Twitter tools lose functionality.

"Today we are previewing changes to two of the most commonly used Twitter standard API endpoints – user and mentions timeline. Specifically, we will begin limiting total GET requests to the v1.1 /statuses/mentions_timeline and /statuses/user_timeline endpoints to 100,000 requests per day as of June 19, 2019."

In non-technical terms, this means that apps which send more than 100,000 API requests per day - so highly used third-party tools - will now need to justify why they need that level of access. If the developer can explain that their usage is for research purposes, they'll be able to keep using the API as always, but if they're primarily using this access to serve business customers, then they'll need to pay more for the privilege.

How much, exactly, Twitter's going to charge is not clear at this stage, but tweet data access can get pricey. In late 2017, Twitter announced its new Premium API access program, with general prices ranging from $149/month to $2,499/month, though varying significantly based on the level of access required. 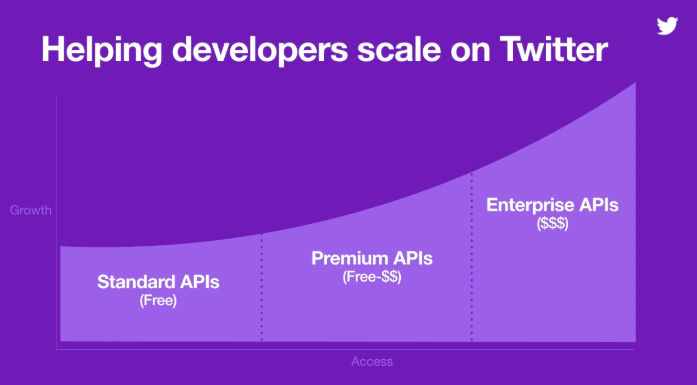 This new review could see a lot of businesses facing an increase in access costs, which could put more of them out of action, and limit the range of third-party tools on the market - meaning the big players will get bigger, while smaller ones will die out.

Twitter's been looking to take more control of its data access in the wake of the Cambridge Analytica scandal at Facebook. Last year, Twitter announced new requirements for developers looking to access its APIs in order to “increase accountability for apps creating and engaging with content and accounts on Twitter at high volumes”. In other words, Twitter sought to reign in third-party tools which enabled actions like mass-following and tweeting, which can be used for malicious purpose.

The re-focus makes sense, particularly amid rising concerns about social media's role in the distribution of misinformation, while it also enables Twitter to better monetize its data access, and generate more revenue through developer tools.

Twitter has long allowed large scale access to tweet data, while other platforms - like Facebook and LinkedIn - have provided comparatively limited data access. That's given both platforms more capacity to monetize their data insights - in Facebook's case, it hasn't necessarily helped in regards to limiting misinformation, but it has forced more business activity to be filtered through Facebook's own platform, as opposed to research and insight coming from outside tools (the larger problem in Facebook's case was in giving data access to academic organizations, which they've since learned from).

Twitter's giving developers a three-month window to assess and update their processes, rather than just throwing a grenade into their operations, but it may eventually see more third-party tweet platforms bow out.

Worth keeping an eye on your favorite Twitter tools in the coming months for any changes in this regard.