In a recent "Small Business Technology Survey", The National Small Business Association divulged that while the use of social media in small businesses has risen in the last few years, 27% still don't use any social media platform at all to interact with potential customers. 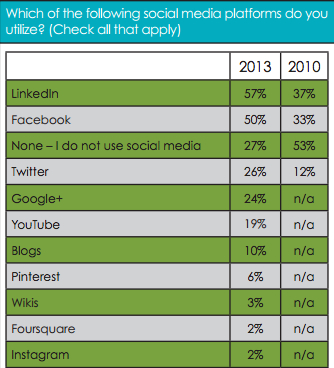 Social media should be a key part of every business marketing plan, especially for small businesses and startups. Despite being disadvantaged by having a smaller advertising budget than their larger, more established counterparts; many small businesses can get a leg up by being more innovative and creative with their social media presence. For inspiration, I suggest they look no further than the travel industry, in which companies leverage their presence on social media to turn their passion into a global brand. Let's start with Twitter.

Twitter estimates that there are currently 284 million active monthly users, with over 80% of them accessing Twitter via their mobile device. That means that almost 75% of small businesses are missing out on a chance to engage with over 200 million potential customers right now. So, how can you use Twitter right now to help your business?

For many in the travel and hospitality industry, Twitter has become the go to network for quick, on-the-move interactions with customers. Airlines and hotels specifically are some of the most prolific users, as they understood early on the benefit of being able to reach their customers in real-time. Today there are hundreds of active airlines on Twitter, but KLM is probably the most forward-thinking in how they communicate with users. You can see below how they use their Twitter banner as a way to show expected waiting time for a customer inquiry. 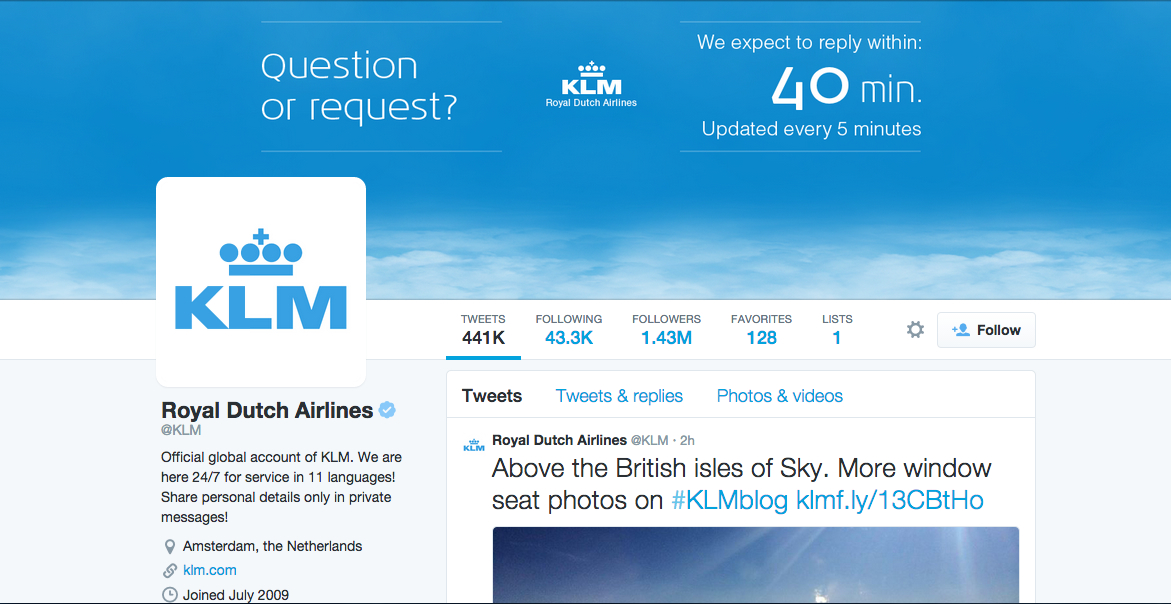 Instead of just asking customers to communicate with them through social media, they're teaching customers that this is the easiest way to get a response. By providing this kind of instantaneous customer service, you are directing people to interact with you on social media. The more customers with whom you interact, the faster your brand will grow, without costing your advertising budget a cent. Simultaneously, it gives you a stage to showcase your customer service skills. 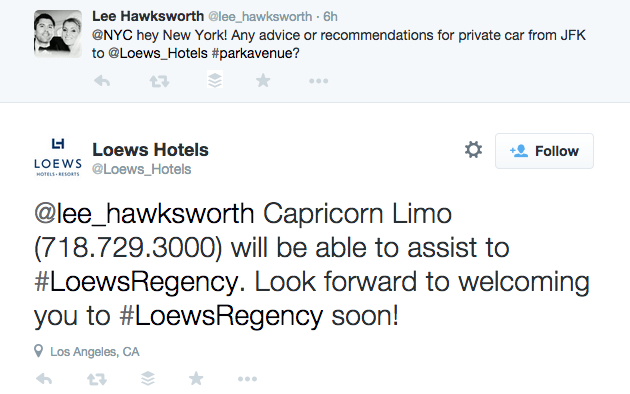 Notice how Loews Hotel & Resorts was not only able to help this customer, but they've now shown other potential customers that they are willing to go above and beyond. Loews has also recently taken to using their Twitter for what they call "Social Reservations", a service that allows guests to book their room directly through Twitter by using #BookLoews in a tweet to @Loews_Hotels. This is another great example of interacting with customers in real-time, by being a part of their social experience, rather than requiring them to extract themselves from it.

Of course, for all this to work, you must adhere to the golden rule of social media customer service: respond to everyone! Dave Kerpen, chairman of Likeable Media, estimates that more than half of companies on social media are not responding to questions or comments. Some companies even go so far as to delete customer posts if they have complaints. What these companies don't realize is that by sweeping negative feedback under the proverbial rug, they are telling their potential client base that they do not deal well with criticism; and they are throwing away opportunities to publicly demonstrate their problem-solving skills and processes. "We all know that companies are going to make mistakes," said Kerpen. "The problem isn't when companies make mistakes, it's when companies don't say, 'I'm sorry.'"

One reason that brands sometimes shy away from social media is because of a stigma that they won't seem authentic and will come across as "spammy." One way to avoid this is to follow the 1-1-4 rule: for every self-promotional tweet, you should respond to at least one tweet, and share or interact with four others. Both JetBlue and Marriott International do a good job of responding to users, assisting if there's a problem, and not over-marketing themselves. 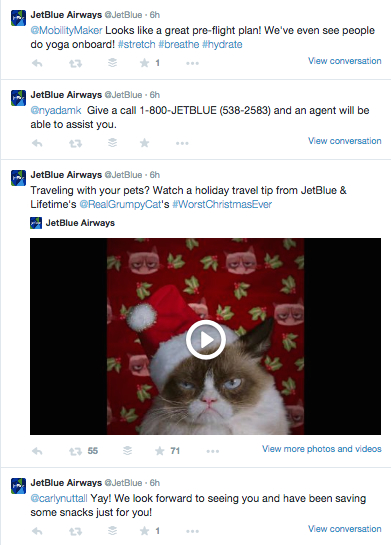 As you can see above, JetBlue is constantly interacting with users, from assisting frustrated users to promoting their own content. Morgan Johnston, manager of corporate communications with JetBlue, looks at Twitter as a way to listen to what his customers are talking about and respond appropriately, "our goal would be to make ourselves available, help whenever possible, and to show that our brand is built by real people who care about our customers." 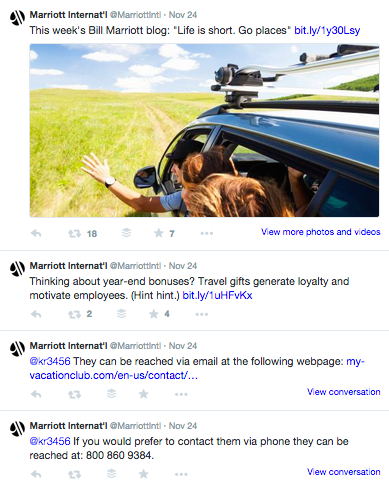 John Wolf is the senior director of public relations for Marriott and he is a big proponent of real-time interaction with customers. In discussing Marriott's corporate Twitter strategy, Mr. Wolf said, "If someone actually has an issue happening in the moment, we are able to support them and take action. One guest left one of our hotels in India, and had left a charger in his room, and he tweeted about it, and we were able to get it returned. He just mentioned it and we jumped on it."

Twitter has recently undergone a (Facebook-like) makeover; moving beyond tweets and less-than-140-characters messaging, and embracing the potential of tagging and photo and video sharing, making it a much more versatile tool for businesses to interact with their customers. The graph below, from Media Blog, shows how important it has now become to share photos and videos if you want to get more engagement and retweets.

Beyond sharing content and and responding to customers, Twitter allows companies to become part of a community. Expedia, the travel booking website, has created a weekly Q&A session that they host and invite anyone to be a part of by asking and answering questions using #ExpediaChat. This gives their potential customers an opportunity to share their advice or stories, providing them with free knowledge for future travel, and also building Expedia's reputation as the site for tech-savvy travelers. This campaign has built up over time and now sees 3,000-5,000 tweets each Wednesday.

Even if it's just taking part in other Twitter chats at first, this kind of interaction can have a strong positive effect on your business, providing that you keep it consistent. If you're going to be doing this every Monday at 2:30 PM, then make sure it happens every Monday at 2:30 PM. Besides the obvious benefits of appearing reliable to customers, you want to give yourself a captive audience each week for any new content you have to share. Try and keep it new and invite other users to join or host with you from time to time.

While it is understandable that many small businesses feel hesitant about using social media due to lack of experience or understanding, this is the type of decision that can have a very positive impact on your business. In an interview with Mashable, Bill Carroll, senior lecturer at the School of Hotel Administration at Cornell, said,

"I suspect we are in the same position that we were with online marketing 20 years ago. The only difference is that it won't take 20 years, it will take 5 to 10 years until we really see the impact of interactive communication among consumers."

Don't wait too long ... that interview was 4 years ago!