WhatsApp Adds New Auto-Delete Options, Enabling You to Set All Your Chat Threads to Self-Erase

Amid ongoing controversy around Meta’s move to introduce end-to-end encryption by default in all of its messaging apps, WhatsApp’s adding another privacy feature, with the ability to set all of your message threads to auto-delete after 24 hours, 7 days or 90 days. 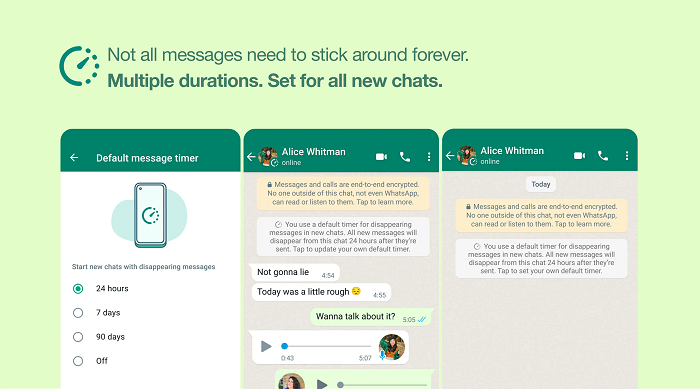 “WhatsApp users will now have the option to turn on disappearing messages by default for all new chats. When enabled, all new one-on-one chats you or another person start will be set to disappear at your chosen duration, and we've added a new option when creating a group chat that lets you turn it on for groups you create. This new feature is optional and does not change or delete any of your existing chats.”

As you can see here, the new ‘Default Message Timer’ option will enable you to set your chats to disappear after a set period of time.

When this option is enabled, a message will be displayed in your chats that informs others that this is the default that you’ve chosen.

“This makes clear it's nothing personal - it's a choice you've made about how you want to communicate with everyone on WhatsApp moving forward. Though of course, if you need a particular conversation to remain permanent, it’s easy to switch a chat back.”

Message privacy is a key feature of WhatsApp, and this new addition will no doubt be welcomed by many - though as noted, WhatsApp’s parent company Meta is currently facing various battles, in various regions, over its moves to enact encryption by default in all chats in Messenger and Instagram Direct, moving into live with WhatsApp.

The bigger picture for Meta is the merging of all of its messaging tools, allowing interoperability – so if you’re using Instagram but your friend is using WhatsApp, you’d still be able to chat with each other across each app.

In order to facilitate this, however, Meta either needs to reduce the encryption status in WhatsApp, or bring the others up to speed. And given the pushback WhatsApp saw when it announced a relatively minor change to user data sharing last year, it seems the latter is the only option, which will increase utility, while also, potentially, making Meta’s app network harder to split up, if antitrust concerns lead to such a recommendation.

But various authorities claim that adding more encryption across Meta’s networks will help to shield criminal activity, making such networks both easier to access for criminals, while also making their actions harder to track. Theoretically, with encryption added, no one, not even Meta itself, will be able to access the content of private chats, which authorities argue will make it harder for law enforcement to track down and catch such groups across the three platforms.

Meta has sought to provide reassurance that it will maintain a level of security, though those measures don’t really address the primary concerns. Meta has also delayed the full rollout of E2E encryption across its apps till 2023, but there is still a way to go in ensuring all sides are comfortable with the arrangement, and that Meta won’t see further penalties or enforcement as a result.

Which is why this new launch comes at an interesting time, with Meta once again pushing its privacy settings even further, amid this ongoing debate.

Really, it’s more control for users, which, in the majority, will be beneficial, but there are segments and gaps in this approach which could exacerbate problems.