WhatsApp has officially launched a new feature that will enable users to immediately search for additional context on any highly forwarded links via a Google search prompt included within the message stream, another measure to help slow the spread of misinformation via the app. 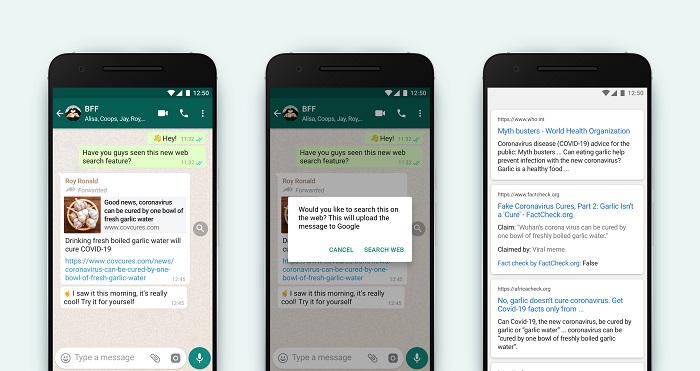 "Today, we’re piloting a simple way to double-check [the content of forwarded] messages by tapping a magnifying glass button in the chat. Providing a simple way to search messages that have been forwarded many times may help people find news results or other sources of information about content they have received."

WhatsApp began testing the new option back in March as part of various measures to address concerns about the spread of COVID-19 misinformation via the app. Indeed, with its standard end-to-end encryption, and dominant reach in many regions, WhatsApp has become a key focus for many authorities looking to stop the circulation of misleading coronavirus updates, with various 'cures' and counter-official advice being pushed through viral messages.

WhatsApp sought to limit this in April by adding in new limits on how many times a message could be forwarded within the app, which it says lead to a significant reduction in viral message sharing. Highly forwarded messages are now also tagged with a an arrow icon to highlight such, while the capacity to quickly verify the information within each via a Google search will, ideally, provide another way to stop misinformation from spreading.

The spread of misinformation via WhatsApp has also boosted calls from various authorities to facilitate more insight into what people are sharing in the app.

Several government agencies around the world have called on parent company Facebook to provide an option for law enforcement groups to be able to crack WhatsApp's encryption, as the current set-up of the app essentially facilitates illegal activity. Facebook has not only refused such, but has vowed to expand encryption as standard in all of its messaging apps, which has set it on a path towards another clash with authorities, many of whom are already concerned with Facebook's growing power.

Introducing new measures to help users double-check forwarded information is an important, and valuable step, but it's only one aspect of the broader concern around message sharing, which looks set to be an element of concern for Facebook for some time yet.

WhatsApp's new search the web option is being rolled out from today in Brazil, Italy, Ireland, Mexico, Spain, UK, and US, with other regions to follow.