As social platforms and regulatory authorities have weighed various considerations in how to combat issues with online abuse and coordinated manipulation, a proposal that's repeatedly been raised is personal identity verification, and the possibility of making this a mandatory element in creating a social media account.

That idea is now gaining traction once again, with UK celebrity Katie Price launching a petition to get British Parliament to embed such within law, which has quickly exceeded the 100k signature requirement for parliamentary consideration. 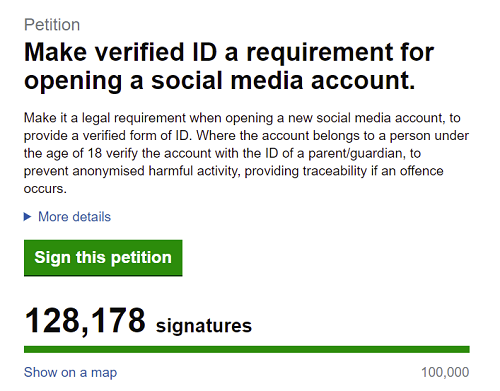 As noted in Price's proposal, the push, if implemented, would "make it a legal requirement when opening a new social media account, to provide a verified form of ID".

"When the account belongs to a person under the age of 18 verify the account with the ID of a parent/guardian, to prevent anonymised harmful activity, providing traceability if an offence occurs."

Price's motivation is based on both her own, direct experiences in facing abuse and attacks from people online, and in seeing the same directed at her teenage son Harvey, who suffers from Prader-Willi syndrome, a rare genetic disorder that causes a range of behavioral and medical impacts. Price uses social media to raise awareness of Harvey's condition, which regularly leads to torrents of criticism, abuse and more, directed at herself and her son.

On the surface, the proposal makes sense, and the platforms have actually been moving some way towards this form of additional verification, in some ways, in more recent times.

Following the 2016 US Presidential Election campaign, in which Russian-based groups were found to be targeting US voters via fake and misleading accounts, Facebook implemented new regulations that require advertisers running political ads to have a US-based mailing address.

Facebook also launched a 'Page Publishing Authorization' program, which has since seen the managers of some large Facebook Pages put through a required ID process, in order to confirm their information, which Facebook expanded to personal profiles in May last year. Instagram has also implemented similar, with a system that requires the owners of profiles found to be connected with suspicious behavior to provide identification information.

These measures are along similar lines to Price's proposal, but they only relate to isolated cases as identified by Facebook's teams, and not to individual profiles, which, based on Price's outline, are the cause of the most damage.

By expanding the same to all accounts, on all platforms, thereby linking a real-world identity to each person's online persona, the idea is that people will be less emboldened to abuse and attack people online, as there may well be real-world, legal consequences for such. The realization that such can lead to penalty, and other personal impacts, could indeed act as a deterrent - but a key question is whether it's even possible to implement, and then whether it would actually deliver the desired outcome, as a result of a significant upgrade in platform efforts.

On the first element, there is a question as to whether, say, Facebook would even have the capability to now require all of its almost 3 billion users to submit identification documents, and have them verified by the platform. Had this been a requirement from the beginning, it would be viable, but retrospective approval of so many people could be problematic, and expensive, which will see the platforms resisting such calls.

There's also a question of business impact. Facebook is currently able to report that it has 2.8 billion users, which is a key draw for its ad business. It has little motivation to actively reduce this number, which ID verification for each account would inevitably do - so it makes sense then that the platforms themselves would look to avoid this measure, as an operating condition, in any way that they can.

That's not to say it shouldn't happen, but you can expect the platforms themselves to strongly campaign against such - and maybe even imply that it would be utterly impossible, whether that's true or not.

That then leads into the next consideration - would such a requirement actually work?

In October last year, Australia's eSafety commissioner Julie Inman-Grant noted that even if you were to require every person to submit their ID, in most cases they see, that wouldn't have much of an impact.

"In a lot of the adult trolling that we see … [characteristics of a troll] is often high self-esteem, sadism, and masochism - there are a lot of trolls that aren't interested in hiding their identity at all. It's not always going to be a deterrence."

Inman-Grant also noted that there would be "huge civil libertarian pushback in the US", where the further implications of linking your online and offline identities could lead to significant concerns around freedom of speech and personal protection.

Would such laws reduce online abuse, but increase real-world violence? That's actually a very real consideration, where people would have the capacity to potentially find out where each user lives, and by extension, their further personal information.

And what if that information gets into the hands of Government officials, or other politically-motivated activist groups? There are extended implications for protecting the identity of, say, whistleblowers and others who might choose to speak out, and while it may provide a level of enforcement in some cases, it could also lead to further, unintended impacts as a result of such a shift.

Would those potential negatives outweigh the main impetus for such a change?

It's impossible to say, but there is arguably enough potential logic against such a move to not implement ID laws across the board, which is likely where this new push will end up.

But then again, something should be done - and in fact, such considerations were part of Twitter's recent discussions around changes to its account verification process, before it settled on its new regulations.

It's something that all social platforms are considering, but whether it's actually a solution, as such, remains a question.

We'll wait and see what happens with this latest proposal in the UK.

Thanks for Matt Navarra for the heads up on this new push.