YouTube Points to Shorts as Key Development Opportunity in 2021

If you’re looking to maximize your YouTube performance in 2021, it may be worth considering what types of short-form video clips you could also post to the platform, in addition to your regular uploads.

Last week, YouTube CEO Susan Wojcicki outlined the company’s key areas of focus for the year ahead, which included this note:

“More people are creating content on their phones, which is why we’re investing to give creators more video editing tools. We’re now beta testing YouTube Shorts in India and we’re excited to help the next generation of mobile creators tell their stories by lowering the barriers to entry. So far, videos in our new Shorts player - which helps people around the world watch short videos on YouTube - are receiving an impressive 3.5 billion daily views! We’re looking forward to expanding Shorts to more markets this year.”

Yes, Shorts, YouTube’s TikTok clone functionality, is already seeing 3.5 billion views a day. The majority of those, you would assume are occurring in India, where YouTube added Shorts to fill the gap left by TikTok after it was banned back in June. But even so, it does suggest that Shorts does have promise, and could become a much bigger consideration, if YouTube does indeed choose to make the Shorts feed more of a focus. 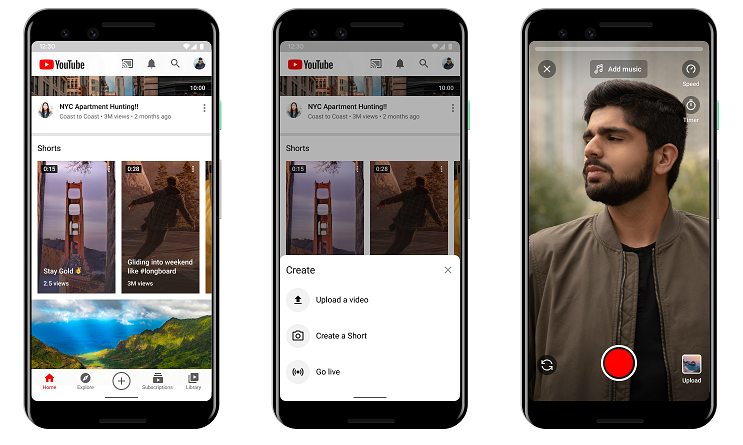 To recap, Shorts, as it sounds, is a feed of short video clips, each a maximum of 60 seconds in length, presented in mobile-friendly vertical format. The Shorts feed appears within the home feed in the YouTube app, while as Wojcicki notes, users in India also have access to a dedicated Shorts camera tool (last frame above), which YouTube is yet to roll out more broadly.

Users not in India can have their short videos included within the Shorts feed by including the hashtag #Shorts in the title of their short clip uploads. So it is possible to start adding Shorts to your account right now - and given that it looks set to become a bigger focus, that may be worth considering, or at the least, it could be worth mapping out a potential short video strategy, either for YouTube specifically, or one that includes YouTube, along with TikTok and Reels.

Yes, it’s a direct rip-off of TikTok, and yes, it means adding another content creation process into your mix. But like Stories before it, short-video feeds are fast becoming the new norm for many users - and as such, an important consideration for maximizing your digital marketing performance.