So, I have young kids, which means that I'm exposed to a lot of YouTube influencers as my son and daughter go through the range of their favorite channels, switching through YouTube clips on the lounge room TV.

I'd prefer they watch YouTube on the main TV, as opposed to an iPad, because then I at least get to monitor what they're watching, and ensure they don't veer down the wrong path. But one element that always stands out is that the presenters all have a defined presentation style, down to the words they use, the expressions - and importantly, their opening video greetings.

They all open their videos the exact same. Every. Single. Time.

Which actually makes sense - by establishing an opening catchphrase or greeting, it removes another element of the creative planning process, as the creator already knows how to get their video started. It also serves a branding and familiarity purpose, as viewers get more accustomed to the common elements of each channel.

But what I didn't know is that so many YouTubers open their videos with the exact same phrase: "Hey guys".

That's what I found out in YouTube's latest research report, which looks at the most commonly used opening lines in YouTube videos, based on a sample set of over a million clips from some of its most popular platform stars.

"You might not think about it much, but the first words a creator uses to greet their audience are pretty important. And the more popular the creator, the more likely that opening will become a signature sign-on. But of late, we (and a lot of other people) have noticed that one greeting in particular seems to have become fairly ubiquitous: “Hey guys.” Which got us wondering about where it might rank among all the other ways creators start their shows."

Indeed, as you can see in the image above, "Hey Guys" was used in a massive 36% of the videos in the study pool, making it the most popular opening line by far.

YouTube's new report includes examples of videos using the greeting, while it also lists the other popular opening statements within the dataset, as well as how their usage has changed over time. 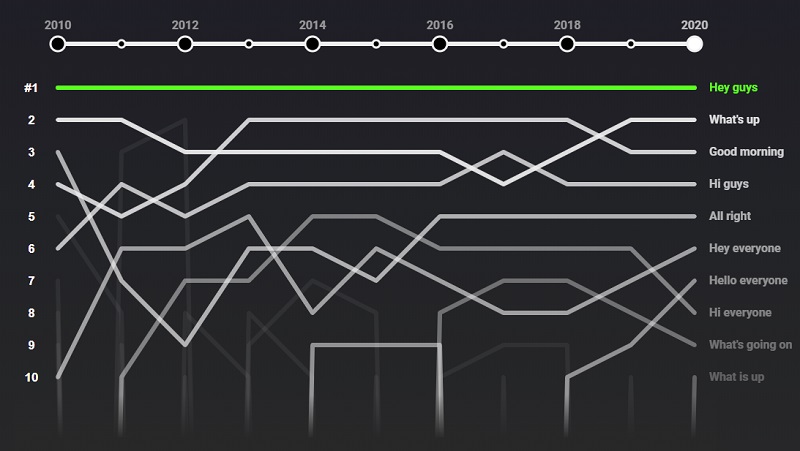 As you can see, "Hey Guys" has actually always been the most used greeting, while others have switched around. YouTube does also note that there may be some gender considerations within the use of 'guys' in this context, but clearly, that's the one you're likely to hear the most in your YouTube viewing experience.

It's definitely what I hear when my kids have sat down on the couch for a YouTube viewing session.

In addition to this, YouTube has also broken down the results by category, to see if the same trends hold up. 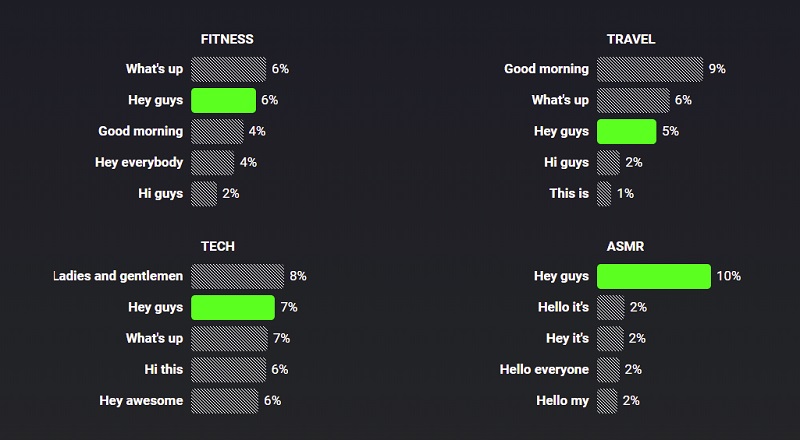 "The dominance of “Hey guys” isn’t absolute. When you break things down and look at distinct categories, other greetings assert themselves. Fitness channels, for example, favor “What’s up” (your heart rate, maybe?), while travel channels opt for “Good morning” (signaling the sunrise-like possibilities that lie waiting beyond the horizon. Or something.)."

That could help in your planning, either by aligning with industry norms for your sector, or looking to avoid the most common cliches. I'm not sure which approach would be more effective, but it may be a consideration either way.

YouTube's full video greetings study also looks at differences by region and language, while is also provides a heap of examples as to how creators open their clips.

I mean, it's not the most crucial element of your creation process, but it's interesting data either way, which, if nothing else, will have your ears prick up and take notice the next time you're listening in to someone watching a YouTube clip. You can then regale them with your interesting knowledge of how "Hey guys" is by far the most common video greeting.

Which might impress them. For what it's worth, my kids didn't care.

Either way, there are some considerations for your own YouTube approach within this data set.