In July this year, Twitter introduced a new 'event targeting' capacity within Twitter ads, which aims to help brands capitalize on Twitter's strength in live event coverage. The system is very easy to use - Twitter provides advertisers with a calendar of major events, each of which they can click on and get insights about the Twitter audience that engaged with it, including audience demographics and reach stats. 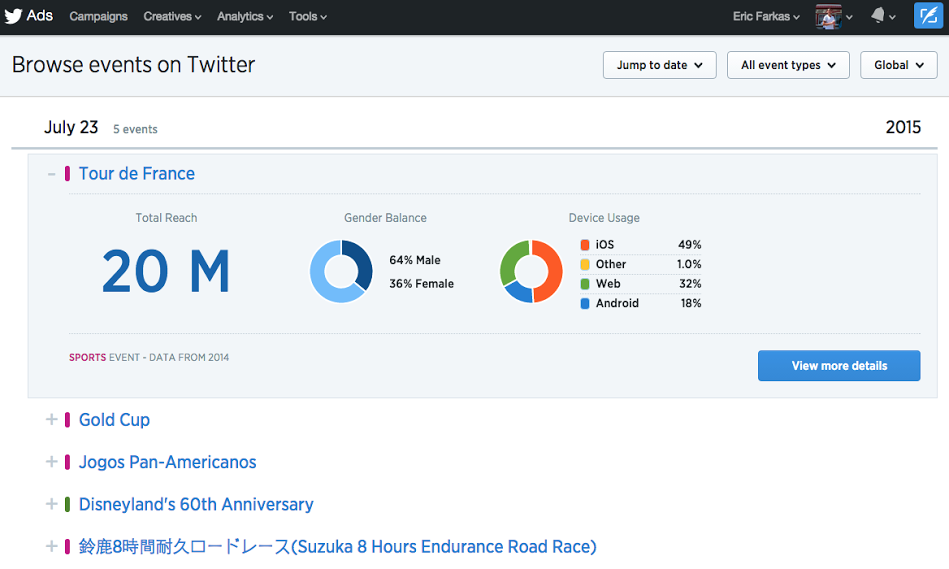 Advertisers can also see the tweets that performed best during that event last time round, and use that cumulative info to create their own ad campaign to tie-in with the discussion and capitalize on audience attention, which can greatly improve amplification and ad performance. Essentially, the process encourages newsjacking, while highlighting how to do it right.

To underline the benefits of this offering, Twitter this week published a blog post highlighting how advertisers tapped into the Twitter conversation around the most recent GOP Debate, the tweets surrounding which, according to Twitter data, were viewed more than 1.1 billion times.

Tweets about last night's two GOP debates were viewed over 1.1 billion times on Twitter and across the web.

That's a lot of discussion, a huge potential audience to reach with your message. But in order to do that, your message has to be relevant to that discussion - and while the examples shown are all political and in direct connection with the debate, they do highlight how brands should be approaching real-time marketing for major events for best success - providing timely, relevant tweets to connect with that audience and spread your brand message, while using specific cues and moments to maximize reach.

Here are some of the examples.

This is a clever way to utilize multi-screening to ensure brand-relevant points are highlighted to the audience specifically engaged in the event and surrounding conversation. As noted by Amanda Bloom, who worked on behalf of Conservative Solutions for the debate:

"Thirty five percent of all screen time involves simultaneous usage of TV and a digital device. We know that it spikes much higher than that during live events like debates. We leveraged Twitter's Event Targeting option, which allowed us to make sure our message was being delivered in real time to the audience watching and talking about the debate on their second screen."

By using Twitter's event targeting, Conservative Solutions was able to use Twitter's internal targeting triggers to reach not only those directly participating with the event discussion by tweeting, but also those viewing and engaging with event-related tweets in other forms, maximizing the reach of their message.

There's only one candidate EARNING IT IN IOWA, Bobby Jindal. Watch and Retweet: https://t.co/6MfSY27oC9

They also targeted journalists in certain states to ensure the message reached those covering the debate in an effort to boost their key points.

In utilizing Event Targeting for this purpose, the organization was able to focus on the people most likely to amplify their brand message by reaching those actively involved in the real-time discussion. This underlines another major benefit to event targeting - it highlights those you need to reach by showing you who's actively engaged. It also enables brands to reach related media outlets and groups who are paying attention to the discussion - and thus, are more likely to be writing about as part of the proceeding coverage.

The American Petroleum Institute took the opportunity to highlight the potential economic risks of energy policy issues, which was one of the key elements discussed as part of the debate.

This, again, highlights the benefits of getting your brand message to a targeted and engaged group based on the discussion around an event. Rather than targeting based on on-platform user behaviors and discussion points, the Petroleum Institute was able to generate greater exposure for their message by tapping into the wider, trending discussion, potentially exposing a significant amount of new audience to their message and raising awareness of the debate.

As noted, while these messages are obviously, and logically, politically focused, if you remove the specific context of the discussion, you can see how brands could use Twitter's Event Targeting option to reach a wider audience as part of virtually any major event. And big events is where Twitter does best - the recent MTV VMAs was the most tweeted about, non-sports event in history with 21.4 million tweets specifically referencing the event. Tapping into such discussion, highlighting brand-relevant messages or moments in creative, engaging ways can provide a huge boost to your business.

Interestingly, while the GOP Debate was actually sponsored by Facebook (to the surprise of many), the overall consensus seems to be that Twitter actually emerged as the real winner of the debate, with so many discussions happening on the micro-blog platform stemming from the event. While Facebook is the clear leader of the social pack, Twitter still holds the majority of attention during live events, and can be a powerful tool for advertisers to reach engaged, active participants in such discussions - tap into the discussion and there is massive potential for brand reach.