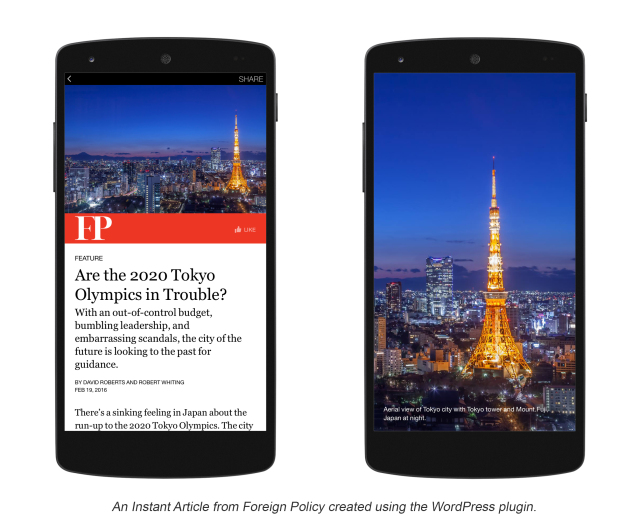 Hey, do you have a WordPress blog? Given the stats, you probably do - there are more than 54 million new posts published on WordPress every month - that equates to around 1.7m new blog posts being uploaded to WordPress hosted sites every day.

WordPress is the default option for many bloggers due to the platform's ease of use and reliability, and while the company doesn't publish any official user stats, the tool's considered the most widely used blog platform, with some estimates suggesting the WordPress CMS powers around 25% of all websites.

Given this, today's update from Facebook is very big news indeed. Via a post on the official Facebook blog, The Social Network has announced that they've worked with Auttomatic, the parent company of WordPress, to develop a new Instant Articles plugin for WordPress sites.

In effect, this means anyone who publishes on WordPress will now be able to quickly and easily create Instant Articles on Facebook - Instant Articles, for those unaware, is Facebook's way of speeding up mobile content delivery, utilizing Facebook's advanced device compatibility and presentation tools to make blog content load faster and be more responsive when delivered via Facebook, with a range of platform-specific tools like integrated maps, photo-tilting and zoom options. The catch with Instant Articles, however, is that all your content is published on Facebook, as opposed to diverting traffic back to your own site. That's great news for Zuck and Co., as it'll keep people on Facebook for longer, but it's not so great for the publishers themselves, as fewer visitors to their sites will also mean fewer opportunities to monetize that audience. But Facebook's been making moves to fix that and make Instant Articles a more appealing proposition for all publishers.

Initially, when Instant Articles was rolled out, The Social Network implemented tough restrictions on how many ads could be shown in each article - which was obviously a concern, considering that those publishers would have to give up ad revenue on their own sites in order to have their content appear in Instant format. In response to this, Facebook recently moved to ease those ad restrictions, allowing publishers more freedom to put more ads into their Instant Articles, and as a result, many Instant Articles publishers (of which, Facebook says, there are already hundreds) are now saying that Instant content generates the same amount of ad revenue as their own mobile properties.

That doesn't completely move the revenue potential of Instant Articles into parity with what publishers can do with their own sites - where publishers can link to their other posts and/or subscription buttons, newsletter sign-ups, etc - but it's a good start, and given the massive reach potential of Instant content, you can see how Facebook's move to keep people on Facebook for longer by hosting content direct could be on track to pay off big in future.

The advertising and monetization angle is of particular interest in the context of today's announcement, as the addition of a WordPress-specific plug-in will also open the door for more bloggers to monetize their content through Instant Articles. Last month, as part of an announcement about the expansion of Instant Articles, Facebook noted that they would soon be "opening up the Instant Articles program to all publishers-of any size, anywhere in the world." When asked specifically if that included one-person operations - someone typing their own stuff on their personal WordPress blog, for example - Facebook confirmed it would. 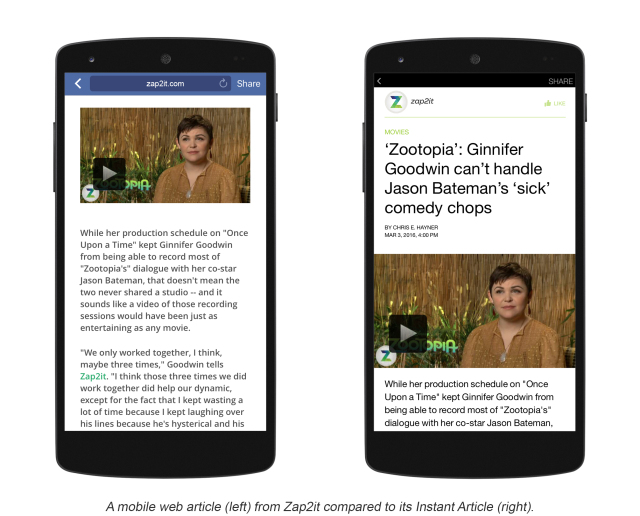 The definition of 'publisher' in this context is very different from what we'd traditionally associated with this term - now, anyone with a blog theoretically falls into that category, and so long as their content is up to standard for Instant Articles (Facebook will have an approval process in place for Instant content), any WordPress user will be able to place ads against their content within the Instant format and take their first steps towards building their own media empire.

This, again, boost the wider appeal of Instant Articles - if even a portion of those 1.7m daily WordPress posts gets connected through to Instant Articles, that'll be significant, and given that Instant Articles will load better on mobile, where an increasing amount of people are consuming content, it's not hard to imagine that the Instant versions of your content could end up drawing a larger audience than your own original posts on WordPress, expanding your audience and providing more exposure and opportunities for bloggers.

You'd be building audience on Facebook's land, of course, and the landlord will be able to change the rules at any time (which can become a problem when you build a reliance on that audience), but given that Instant Articles plays into Facebook's ambition of getting people to stay on Facebook forever, the risk on that front is probably not as high as some might suggest.

Facebook's wider ambition is to make Facebook the internet - to make Facebook so integral to every users' digital lives that it becomes the only platform that anyone ever needs. And given that both overall users and time spent on Facebook are continually increasing (up to 46 minutes per user, per day, at last check), they're clearly succeeding on this front. Combine that with their efforts to connect the world via internet.org, giving Facebook reach to even more users (and, by extension, Instant Articles publishers more access to more audience) and you can see how Facebook is advancing towards both solidifying and expanding its market position with every step.

Within this context, the goal of Instant Articles is clear - provide all the content in the most user-friendly format possible and people will stay on platform more often - a win-win for publishers and Facebook, right? While it's hard to say how Instant Articles will definitively play out, what is clear is that it will lower the barrier for entry for newer players, while possibly making it harder for established publishers to continue to generate the same revenue, if Instant Articles becomes as influential as many suspect it will. This increases competition overall, which is good for consumers, but at the same time, it would be a poor outcome if some of the existing, influential and important voices in the field were to lose out as a result.

Whether that will happen, no one knows, but the evolution of Instant Articles - and Facebook more widely - will roll on.