Last month, Twitter introduced a new option which raised the hackles of many a seasoned Twitter user.

That option? An algorithm-defined timeline.

The idea of an algorithmic timeline for tweets has been in discussion for some time - the actual roll-out and had even been leaked by BuzzFeed the week before the official announcement. BuzzFeed's report subsequently lead to the creation of a new hashtag - "RIPTwitter" - which was used by thousands of people to voice their displeasure at even the suggestion of such a change to how Twitter works.

That backlash may have actually lead to Twitter making the algorithm-defined timeline opt-in - a detail which was highlighted repeatedly throughout Twitter's various announcements on the addition. But nevertheless, the option is here, and it is being used by some, so Twitter's taken the opportunity, via their Small Business blog, to highlight the potential impact of the change, and what it may mean for businesses looking to maximize their engagement via tweets.

The potential problem: People may see fewer of your tweets if they're not generating enough engagement, as the algorithm won't see them as important.

Okay, there's more to it than that - Twitter's actually provided seven tips to help brands up their engagement and ensure their tweets don't get lost in the shuffle as users switch to their algorithm dictated feeds.

Those tips are as follows.

1. 'Define the Voice of Your Business'

"To be heard in the noisy environment of social media, it's crucial to have a clear voice that channels your business's personality. For example, is your business inspiring, playful, or a serious authority? Use language and tone that conveys the key attributes of your business."

ATTENTION EMPLOYEES: employee of the month once again goes to the 5th floor vending machine

This, as always, is a relevant point - before you can use social to spread your message, you need to define what that message is and how you're going to communicate it. In large part, this'll be aligned to your brand mission, but it'll also come down to your target audience and what resonates with them. And the best way to learn that is to become part of your target online communities, get yourself attuned to how they discuss topics, how they use hashtags, what issues are of relevance. And then, the next part is to test - try different approaches and see what generates the best response.

As highlighted in this example from woot.com, the tone and style you choose can play a big part in your social outreach strategy.

Of course, this is largely along the same lines as the first point, but Twitter suggests that brands should also employ a platform-specific approach to this process by utilizing their Twitter audience insights data to get a better understanding of who their followers are and what they're interested in. Twitter demonstrates this with an example from British pension scheme Nest, which, through insights, was able to determine that football is a key passion among their target audience.

Don't rely on the grandkids to buy your season ticket for you. #NESTPension https://t.co/4UoqCoCu1c pic.twitter.com/nRbuxoLIwS

Twitter suggests that brands consider how they can utilize popular events and align them to their brand message - but importantly, Twitter also notes that those events don't have to be global-scale trends:

"Remember, these can be everyday, personal events like breakfast or lunch, as well as wider cultural events, like Valentine's Day or Chinese New Year."

In the first example, Pressed Juicery highlights breakfast ideas, with a very good looking photo (that would also resonate on Instagram, I suspect). While you may not consider breakfast an 'event', as such, it's a relevant point - events are essentially anything that inspires a gathering, and if you can align your brand with that and highlight the relevance of your product/service in one image, that's a great way to boost your message via tweet.

In another example, Twitter shows how how Cure & Simple Bacon used creativity to tap into the wider discussion around Valentine's Day. 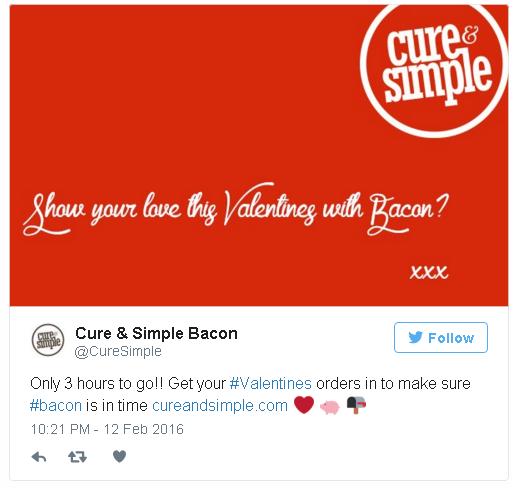 It's an interesting example in itself - though I would question the resonance of such messaging - this particular tweet has no re-tweets, no likes and five total replies.

Either way, it does highlight the point that you can look at events from a different perspective with a view to boosting engagement by using trending hashtags. Trying to wedge in an off-topic or forced reference with a rising tag isn't the way to go, but there are ways to approach those engaging topics in ways that can help boost your overall reach.

4. 'Draw in Your Audience with Rich Media'

"Use videos, GIFs, photos, and emojis to attract people's attention and slow down the speed of their Twitter feed. People are three times more likely to engage with Tweets that contain videos and photos."

Keep your loved ones in the loop while you're traveling https://t.co/i8oTvAHFG8 pic.twitter.com/jcsDRhU0fr

We've all heard the stats about videos - that videos generate the most engagement, that users are growing to expect to see more video content simply because they can, due to improvements in mobile connectivity. Twitter itself has produced various research reports on this, finding that that tweets with images can generate up to 313% more engagement than those without, while 82% of Twitter users watch video content on the platform. There's little question that videos work, and with the continued rise of emoji options and the recent addition of the new Twitter GIF button, it's now easier than ever to attach visual content to your tweets. And it may well be worth that extra effort.

5. 'Use Hashtags to Help People Discover Your Business'

Twitter's advice on this front is two-fold: you can use unique, branded hashtags to make it easier for your audience to find your content, or you can tap into a trending hashtag conversation to extend your content reach.

It's #ThrowbackThursday...Tell us your fave retro sweets for a chance to #WIN a bottle of Sherbet Lemon Shower Cream pic.twitter.com/FervJQyLPw

As previously noted, don't force it, but getting your brand into those trending discussions could be highly valuable.

This one's pretty obvious, yet it's still an element that's overlooked by many. Responding to queries via social - and quickly, if possible - is one of the best ways help build your brand presence and extend your messaging through positive word-of-mouth.

@pahuamiguel Hello Miguel. We are planning to release the Android app in Spring 2016. You can sign up here: https://t.co/E57uRKobdM

This is particularly relevant via tweet? Why, because stats show that more than 80% of customer service requests on social come through via tweet - and that there's been a more than 2.5X increase in the number of tweets to brands and their customer service handles over the past two years. 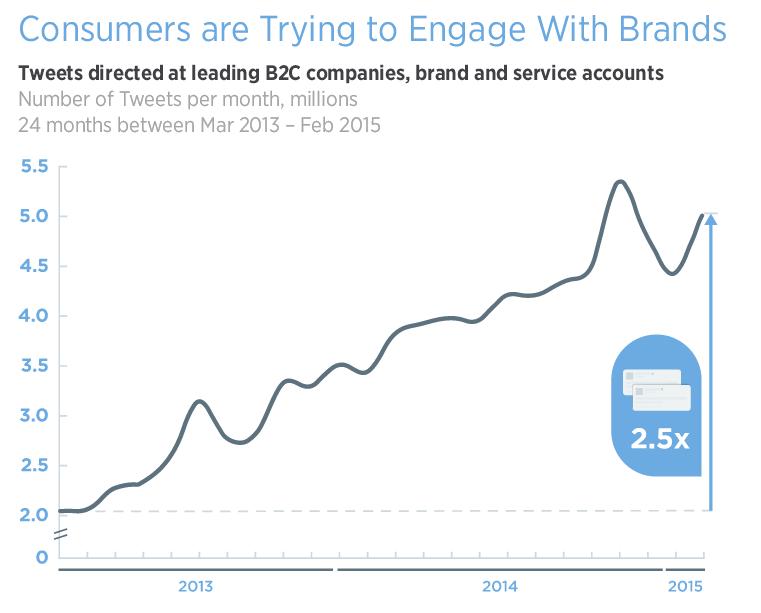 The immediacy and public nature of the platform has made it a go-to reference point for many people seeking to get their questions answered - ignoring this element could be a major error, and could be hurting your brand more than you think.

Twitter's also working to put more emphasis on their customer service capacity, recently introducing a new option to prompt users to switch the conversation to DM if you need more context or to share personal details. While Facebook continues to grow its business offerings, Twitter remains a key customer service channel for many - responding to tweets is, really, just basic good practice.

And Twitter's final tip on how to 'produce sparkling content' is to ensure you're highlighting and celebrating your advocates where possible - which they've exemplified with a great tweet to LocoMetric.

This may be our favourite review so far. Please be careful using RoomScan in small villages everywhere. pic.twitter.com/55F2cahNk5

Re-tweeting positive reviews or responses can be a great way to boost customer loyalty and advocacy, and even the simplest action like 'Liking' one of their tweets can be alot more significant for them than it is for you. People are on Twitter to be part of the wider conversation, to have their voice heard on the global stage. Those brands that hear it are the ones that are on track to win out in social - it's important to consider how you can recognize and acknowledge those community members that have gone out of their way to mention you in the first place.

Will the new algorithmic timeline cause a reduction in tweet reach for many brands? I'd say it's not likely, particularly with the option being opt-in (most people won't bother to go to the effort of actually switching it on, I'd suspect). But then again, if the feedback about the algorithm is good, and if tweet engagement goes up as a result, I wouldn't be surprised to see Twitter switch it to an opt-out tool, making it the default display for all users.