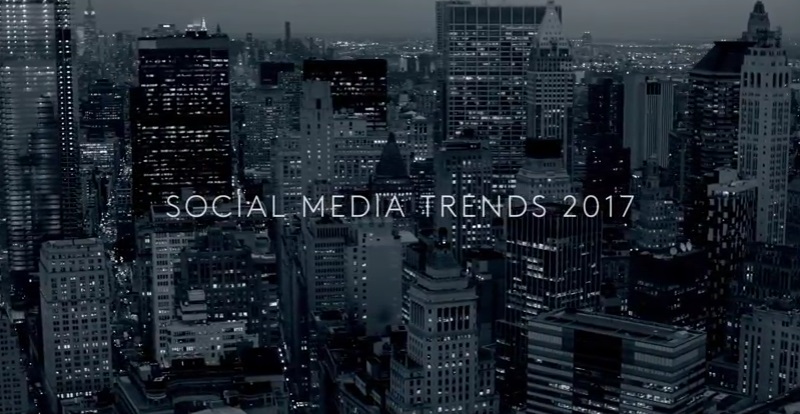 Here are three major social media trends you absolutely shouldn't be overlooking in 2017.

1. Big Platforms are Shedding the "Social" and Elevating their game

Facebook boasts almost 1.8 billion monthly active users (MAUs). And the crazy thing is, that's just the tip of the iceberg.

In 2013, younger demographics began deserting Facebook in droves, seeing it as "uncool". Mark Zuckerberg responded by loosening the platform's attachment to the Facebook label, effectively "unbranding" the social media giant. At the time, its acquisitions - including Instagram, WhatsApp, and Oculus VR ProGeo OY - continued to function as standalone apps, without any apparent connection to Facebook. The idea was to diversify by breaking all the activities into usages: segment and conquer, as they say.

Zuckerberg's strategy cemented Facebook as the world's undisputed social leader. But in the digital world, things can change at the speed of a swipe, a tap, or a click ...

Indeed, growing media giant Snapchat could well spice-up the social landscape. Sure, its user base is only about 20% of Facebook's, but Snapchat makes up for its size disadvantage with engaging video content that resonates with the 18 - 24 year old demographic. It's an environment that Facebook has struggled to secure.

According to the latest Edison Research study, Facebook (including Messenger) remains the most popular social platform among Americans 12-24 years old, with 32% saying they use Facebook most. Snapchat registered second with 26% - but here's the troubling news for Facebook: while Snapchat leapfrogged past Instagram by gaining 11% in just one year, Facebook lost 11% over that same period.

There may be more tumultuous seas ahead as the current generation continuously seeks-out new platforms to satisfy their whims.

But regardless of their recent gains, Snapchat isn't wasting time patting themselves on the back. They're repositioning their brand as a camera maker and are diversifying beyond their flagship app (just Like Facebook). As CEO Evan Spiegel explained in a recent blog post:

"Now that we are developing other products, like Spectacles, we need a name that goes beyond just one product - but doesn't lose the familiarity and fun of our team and brand."

This could pave the way for serious new lines of business for this ambitious young company.

Snapchat's strategy is representative of a growing trend as networks ditch their "social" tag. Pinterest is now a "catalogue of ideas," rather than a social network. Even Twitter followed suit - in April, they switched their designation from a "Social Network" to a "News" app in the Apple Store. What's behind the shift in social strategy? It's about evolving social media's role from a fun distraction, to a vital everyday behavior... just like breathing.

There are several routes that social networks could take to achieve that level of importance - they could merge into existing conglomerates (Linkedin acquired by Microsoft) build their own empire through diversification (Facebook or Snap), or try existing as small "outsiders". One thing is certain: they're building momentum as big (digital) brands.

And as fragmented as the landscape was, the time of consolidation has arrived.

2. Ride the wave of "Super reality"

Oculus Rift, PlayStation VR, Gear VR, HTC Vive ... they may not be household names just yet, but these Virtual Reality (VR) headsets will be knocking at your door soon enough. For the uninitiated, VR is an immersive experience in which your head movements are tracked in a three-dimensional world, thanks to the use of headsets and mobile devices. And this year, ALL the major players from the GAFAs to Mainstream Media like The New York Times want a bite of this juicy market.

Speaking of juicy, you probably heard of a little game called Pokemon GO that blurred the line between the physical and the digital. This wildly popular app gave players just a taste of augmented reality ... and left them starving for more.

And, of course, there's mega-influencer, Facebook. At their F8 conference back in April, Facebook unveiled its roadmap for the next 10 years. As expected, it's heavily focused on AI / VR and AR.

With the acquisition of Oculus Rift, Mark Zuckerberg is already making good on his Virtual Reality ambitions - and there's plenty more to come. Thanks to their acquisition of Two Big Ears (a spatial audio company) Facebook is creating an ambient information environment. Here, people will tap into the experience so easily that it will flow through their lives like electricity or blood through their veins.

Zuckerberg recently announced that the future VR headsets will be the size of a normal pair of glasses, and will handle augmented and virtual reality at the same time. It's a path that resonates with Google CEO Sundar Pichai as well. "In the long run," Pichai pointed out, "we will evolve from a mobile first world to an AI first world." But even that sounds rather tame compared to Zuckerberg's medium-range goal of... teleportation by 2025. You read that right.

But Facebook isn't the only one with bold plans. Snapchat has long had augmented reality inspired Lenses, and now they're rumored to have big plans moving forward. First, they purchased smart eyeglass developer Vergence Labs in 2014. And then there was the launch of Spectacles in September and it's rebranding to Snap. Even Twitter, seemingly mum on the subject, hired a Director of VR and AR to "Empower us all in the spatial computing revolution."

What's the key takeaway for brands? Social Networks are no longer standalone. They're becoming more like electricity - less visible and yet more deeply embedded in people's lives. As Dan Lynch (Interop and SRI International) wrote:

"The most useful impact is the ability to connect people. From that, everything flows."

Brands will need to adapt to this new "ambient information environment" by integrating new technologies such as VR, AR, and IA.

The challenge for brands lies in creating "electronic empathy" in order to connect humans in a deeper, more profound way.

3. Chatbots have arrived... but they're not alone

2014 marked the first time brands reached out to consumers via messaging apps. Companies such as Feeligo promote the use of "branded stickers" in private conversation areas, for advertisers to connect with their audiences. These customized digital stickers immerse consumers in the universe of the brand, and are available free within the platforms.

In 2016, chatbots emerged as another major trend to watch. Chatbots are applications that reproduce codes of a conversation in order to generate automated communication with users. Thanks to chatbots, it's now possible to order an Uber, manage dinner reservations, and secure airline tickets all via text message. Convenient, fast, and accessible via smartphones, bots may well revolutionize online sales and give birth to "conversational e-commerce" - a whole new Social AI customer service. As chatbot technology develops on messaging platforms, we expect it to become much more prominent in 2017.

But before you put all your eggs in one basket, it's prudent to consider the following:

The key takeaway? Chatbots are valuable, but they can't do it all. Brands need diverse forward-thinking marketing strategies.

Adidas is an excellent example of a brand completely redefining its influencer marketing through dark channels - back in May, Adidas launched communities for hyper-connected football obsessives. These "Tango Squads" (about 200 members each and growing) operate on direct messaging apps such as Facebook Messenger, WhatsApp, and Line. They're managed by an Adidas in-house team that shares exclusive content and product news with the squads before it is publicly revealed through Adidas official channels.

Why the bold move by Adidas?

Their global communication director, Florian Alt in a post for Marketing Week, put it this way:

"It's not about sheer reach, what the hyper-connected kids bring is mass awareness. These are the guys who will push out your stories and content. They give it longevity and authenticity, because they are talking in a private messaging environment. If it comes as a referral from your mate, you're much more likely to pick it up than if it comes from a brand."

Alt went on to argue that content is perceived as far more authentic if distributed to 500 kids with 2,000 followers each, than if it's delivered to one global influencer with a million followers.

It's a major strategy shift for large brands, but there's no arguing with the results. And if brands of all sizes wish to grow their relevance with desirable demographics, they need to follow suit and tap into the world of dark social.