As part of our ongoing effort to provide our readers with the best coverage of the latest social media news and insights, we feel it's important to cover all of these, but sometimes they're not worthy of a their own individual post. So to keep you up to date on these smaller changes and features, here's a rundown of five upcoming or "in test mode" features that are currently being trialed by some of the major platforms - starting with Twitter, which is looking to provide more data on tweets.

When you click through on a tweet, you can see the basic tweet data, along with a listing of retweets and "Likes" down the bottom, and some thumbnails of the Twitter users who've interacted with it. 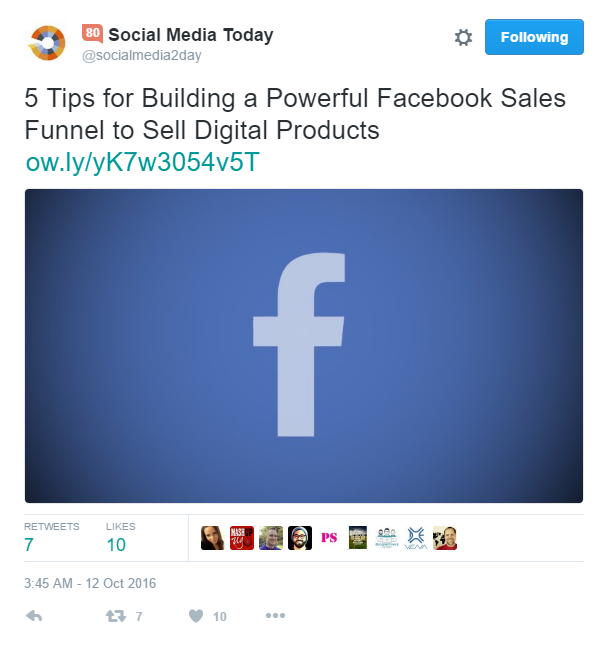 In addition to this, Twitter's currently experimenting with showing the total replies on each tweet. 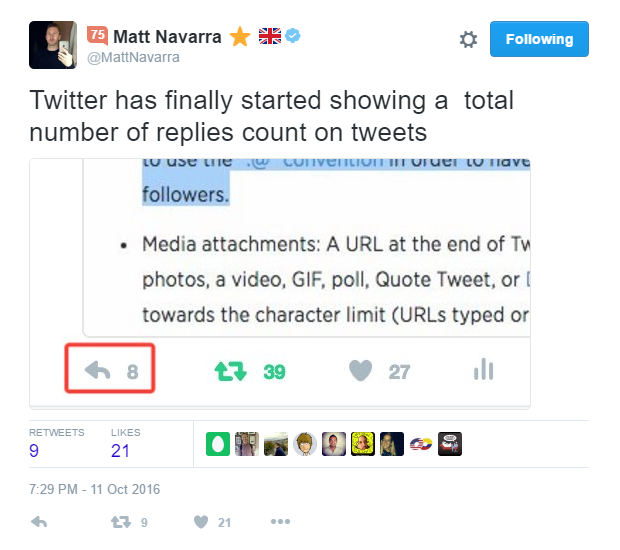 The option is currently being trialed among selected users, with various reports of the new data showing up on the tweet display.

The new metric could provide additional motivation for people to click through on a tweet. Facebook displays a listing of ""Likes", "Comments" and "Shares" on each of their posts - Twitter's "Replies" stat would be equivalent to Comments in this respect. And as you're no doubt aware on Facebook, seeing the level of activity on a post, in regards to comments, can inspire you to click through and see what people are saying, so it definitely adds something more to the process.

The option would provide a quick and easy way for users to get a better understanding of the actions inspired by each tweet, which can only be a positive for overall tweet engagement. At worst, people can simply ignore it, but anything that has the potential to boost engagement is a positive for social managers.

There's no word, as yet, as to when the option may be rolled out more widely - but given Twitter's push to boost on-platform activity, it seems like a safe bet it'll be in play soon.

LinkedIn has quietly added a new insights option in their mobile app, giving users access to more detail about exactly how, and by whom, their updates are being received across the network.

As you can see, the insights available are similar to those you can get on your LinkedIn Publisher posts, which can help ensure that your message is resonating with people you're aiming to reach. You can also use that information to establish connection opportunities with people who are responding to your content. 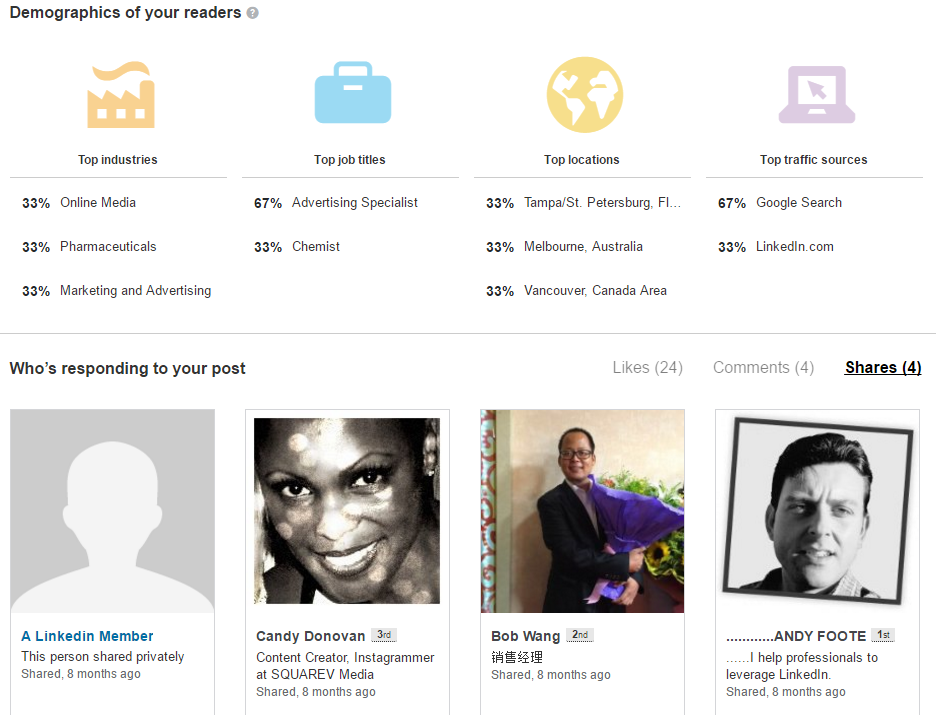 At present, LinkedIn's update insights are only available within their mobile app, though they'll likely become available on desktop too once LinkedIn rolls out its updated desktop design. 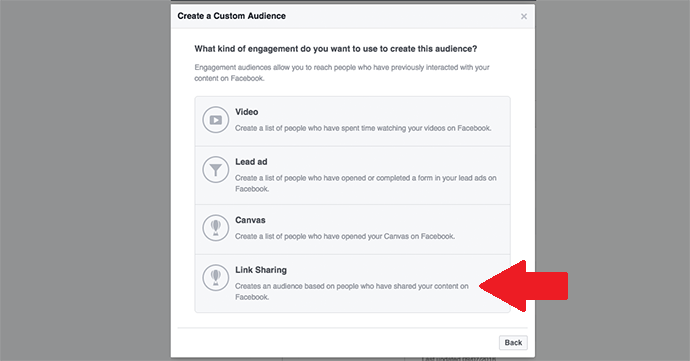 Loomer notes that the option was only available for a short time before being removed, likely because Facebook hadn't intended to release it to the public as yet.

Targeting people who've shared links to your content could be a powerful and effective new option for Facebook advertisers. As noted by Loomer, while you can already target people who've spent time on your website or performed specific actions on your page, targeting link sharers still provides a new consideration and could help boost shares of future content by promoting it to people who've already shown an interest in what you do.

Loomer also noted that this could lead to additional targeting options like Instant Articles engagement, post comments or post Likes, all of which enable new, simple ways to reach more engaged audiences with your Facebook ads.

About a year ago, Twitter introduced a new option called "Scratch Reels" which enable you to rewind and fast-forward GIFs by moving your mouse cursor or finger from left to right and back again on the moving image.

Find wonder in our ScratchReel. Scratch back and forth to make the robot wave! pic.twitter.com/b7wkUoBNGW

At the time, there was no way for users to create their own scratch reels, but now Twitter has opened up the tool to all so you can create your own interactive GIFs.

To upload a #ScratchReel GIF, compose a Tweet with a GIF in Media Studio or Twitter Ads, and select the ScratchReel option. pic.twitter.com/MvBcXxoLmq

You do need access to Media Studio to do it, or (as noted in the above tweet) you can compose a Scratch Reel in Twitter Ads, but if the option proves popular, no doubt Twitter will consider making it easier for everyone to access and utilize in future.

5. Let Recruiters Secretly Know You're Looking for Jobs via LinkedIn

LinkedIn has introduced a sneaky new tool that enables you to let recruiters know that you're open to new job opportunities, without alerting your current employer to your intentions. 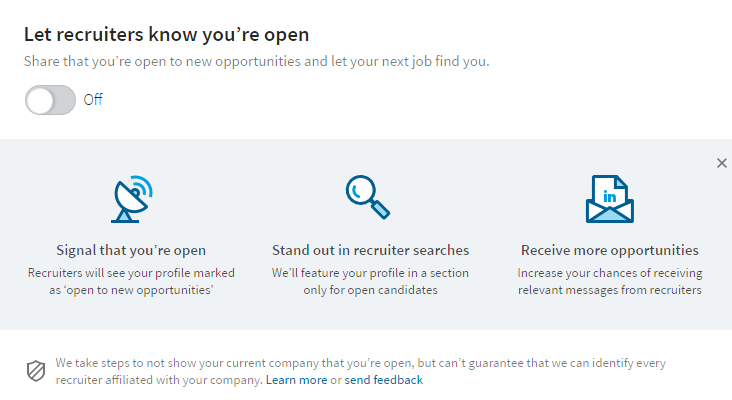 "Who among us hasn't, at some point, tried to find work without our boss finding out? Now, you can privately indicate to recruiters on LinkedIn without worrying. We will hide the Open Candidates signal from recruiters at your company or affiliated company recruiters."

The option's available in the "Preferences" tab on the LinkedIn Jobs home page. Once enabled, you can specify the types of companies and roles you are most interested in and LinkedIn will use that info to share your details with relevant recruiters.

And while it does seem a little devious, LinkedIn says that there's clear demand for such an option among their user base.

"This is good for both recruiters and professionals. Recruiters don't want to message people who aren't interested in a move."

The new option is available in the U.S., U.K., Canada and Australia on both desktop and mobile, and will be rolling out globally soon.