But recently Facebook made an update removing this note.

For example, this post has been edited, but there's nothing to indicate that up front.

But you can still find out if and how a post has been edited. To do this, you click/tap on the down arrow at the right, then select 'View edit history'.

In there, you'll get a full rundown of post edits and how it's been changed. 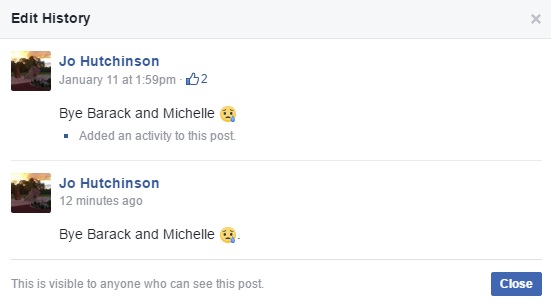 And worth noting, the change does not affect comments - those are still showing an 'Edited' note, where relevant.

Why, exactly, Facebook is looking to hide edits is not 100% clear, though it runs somewhat in contrast to the concerns regularly raised by Twitter in regards to a possible edit tweets option.

Twitter's concern is that given the brief messaging of tweets, even small edits can significantly alter the context, and by enabling editing, there could be problems with tweet embeds and the way people use tweets in their messaging - that re-tweet which once underlined your view, for example, could be changed to the opposite, leaving you providing an unintended endorsement.

In his recent discussion of the possibility of a tweet editing option, Twitter CEO Jack Dorsey specifically noted that such an option would also cause implementation problems if they added a edit history log, which is something Facebook now seems to be putting more focus on, as opposed to a transparent edit note.

You'd suspect that Facebook's data has shown that the majority of edits are only to correct grammar, and therefore removing the up front notation might save the author from embarrassment or questions about their intention - and given you can view the edit log anyway, there's no real need to have such an obvious indicator.

If that is the case, then that might lessen Twitter's opposition to such an option. Probably not, but if Facebook's experience shows people don't mis-use it, maybe that's a consideration.

Either way, an interesting move - if you were wondering why you're not seeing the 'Edited' tag anymore, and how to find out that detail, there it is.