The Most Discussed Issues on Facebook from November [Infographic]

The month of November was marred by the continued impact of terrorism and terror attacks. The co-ordinated attacks in Paris on November 13th sparked an outpouring of grief, and, understandably, dominated the news cycle, which includes Facebook News Feeds. As you can see from the below chart, the Paris attacks are right in the middle of the topic grid for Facebook discussion for the month, skewing slightly older, but dominating a large portion of the posts and comments on the platform over the period. 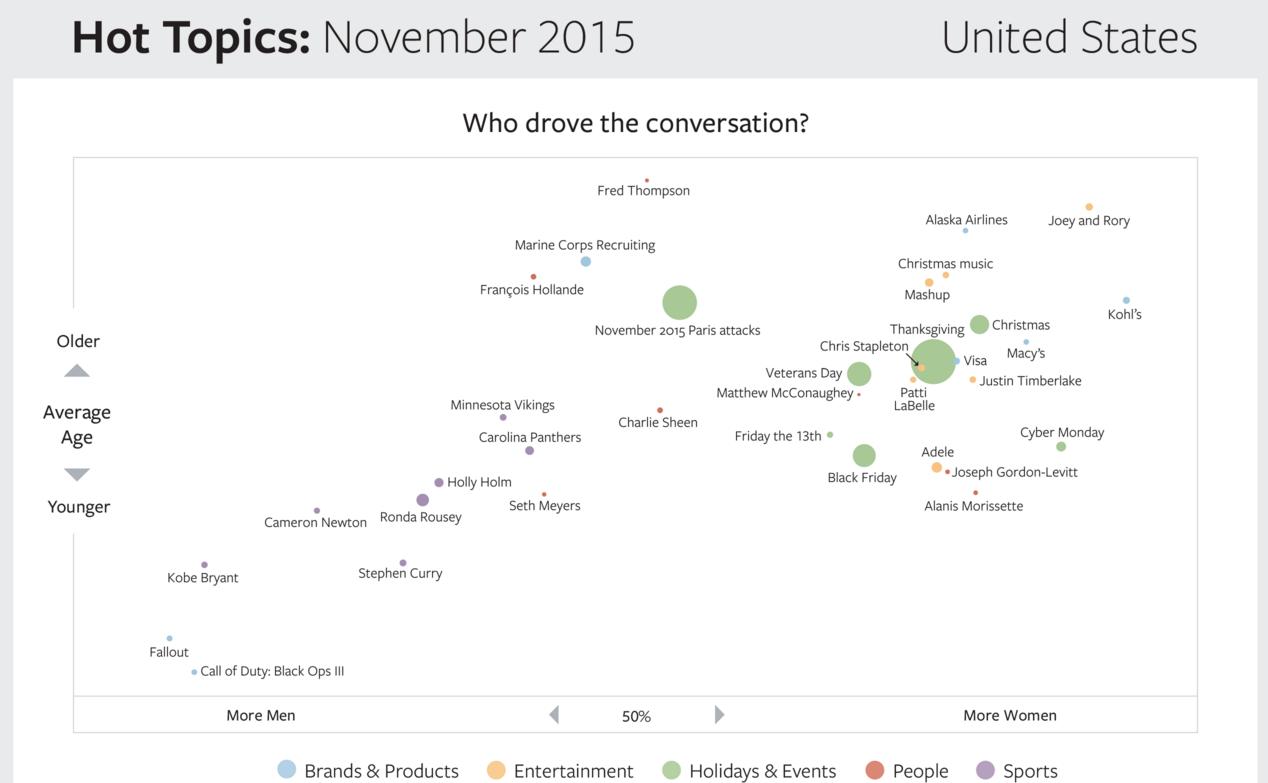 By volume of conversation, US Facebook users mentioned Thanksgiving the most, which is no surprise - Facebook's internal research has shown that Facebook usage spikes on major holidays, a point worth noting for brands considering how and where people are interacting over the upcoming Christmas/New Year period. Black Friday, too, was highly discussed - though interesting that both these topics were clearly more popular among female Facebook users.

On the celebrity front, Ronda Rousey's shock defeat in UFC 193 was a hot topic among younger men, while the contrasting stories of Kobe Bryant announcing his pending retirement and reigning NBA MVP Steph Curry going from strength to strength were also popular issues among that demographic.

In terms of brand discussion, 'Marine Corps Recruiting' is highlighted as the most mentioned brand entity on Facebook for November. It'd be interesting to further correlate those mentions with the expanded discussion of terrorism in the wake of the Paris attacks - did this become a more popular topic after the horrendous events of November 13th? You'd suspect that this played a part, though that trend isn't noted, specifically, in the topic discussion peaks, which are also showcased in Facebook's monthly report. 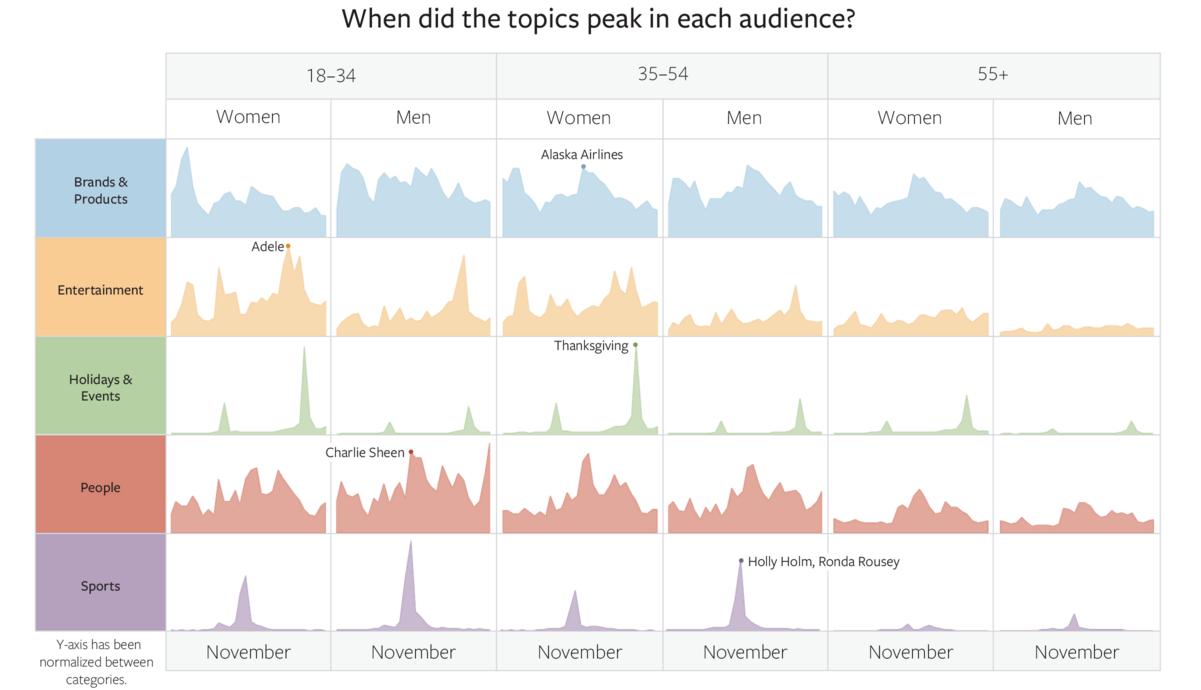 As usual, Facebook's monthly 'Hot Topics' report provides some interesting food for thought around how people are using the platform and what issues and events are resonating with each segment of The Social Network's massive audience. And while much of the discussion is as you'd expect, the insights can provide valuable pointers for brands looking to better utilize Facebook and create content more attuned to their audiences - knowing that 'Alanis Morrisette' is trending among younger women, for instance, might come as a surprise (this is based on her recent performance on The Late Late Show with James Corden), and can provide key guidance as to what your audience is talking about and interested in, helping to better align your own efforts.

In this context, it's also worth noting what people are going to Facebook for. Understanding that people are discussing entertainment and world events at a significantly higher rate than other topics can help frame the context of what people want to see on the platform, which can also help brands better understand how to communicate their offerings in order to maximize their Facebook content performance.

As with other months, Facebook has also provided insight on the top issues of discussion among users in other regions, including Canada: 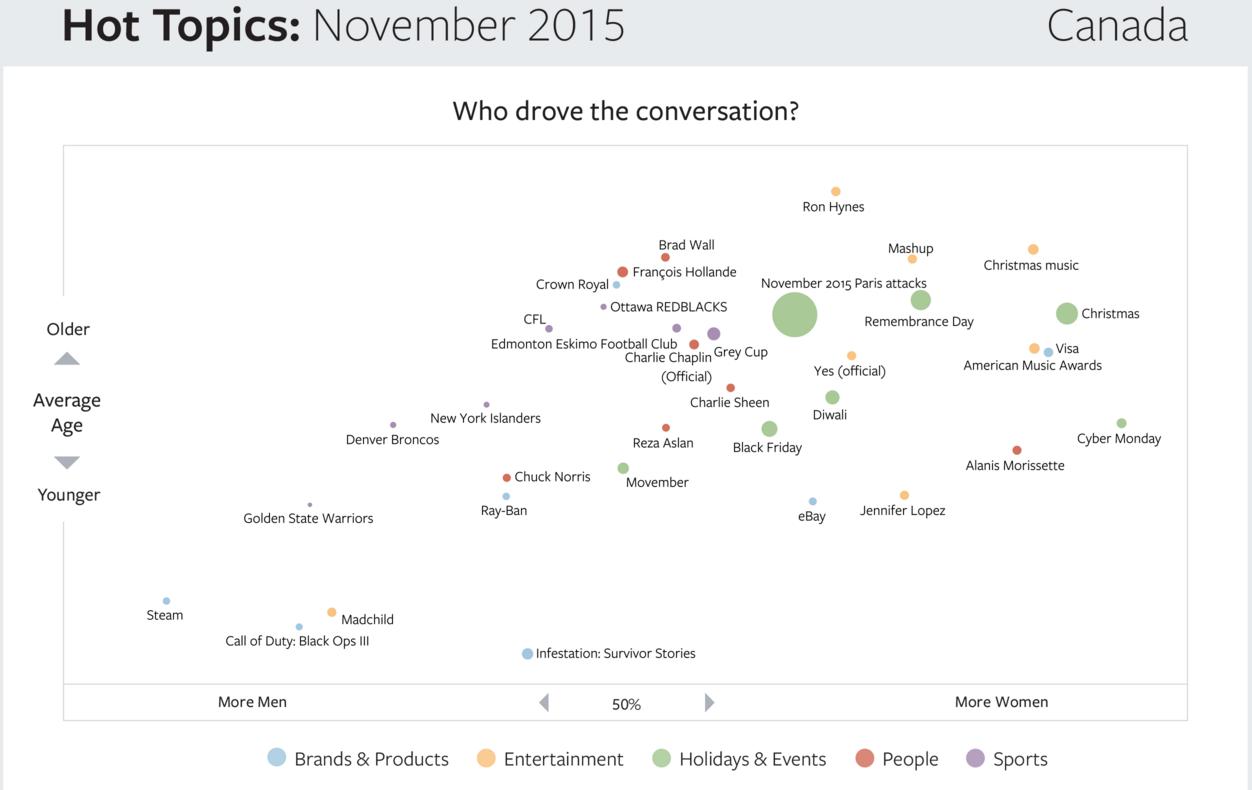 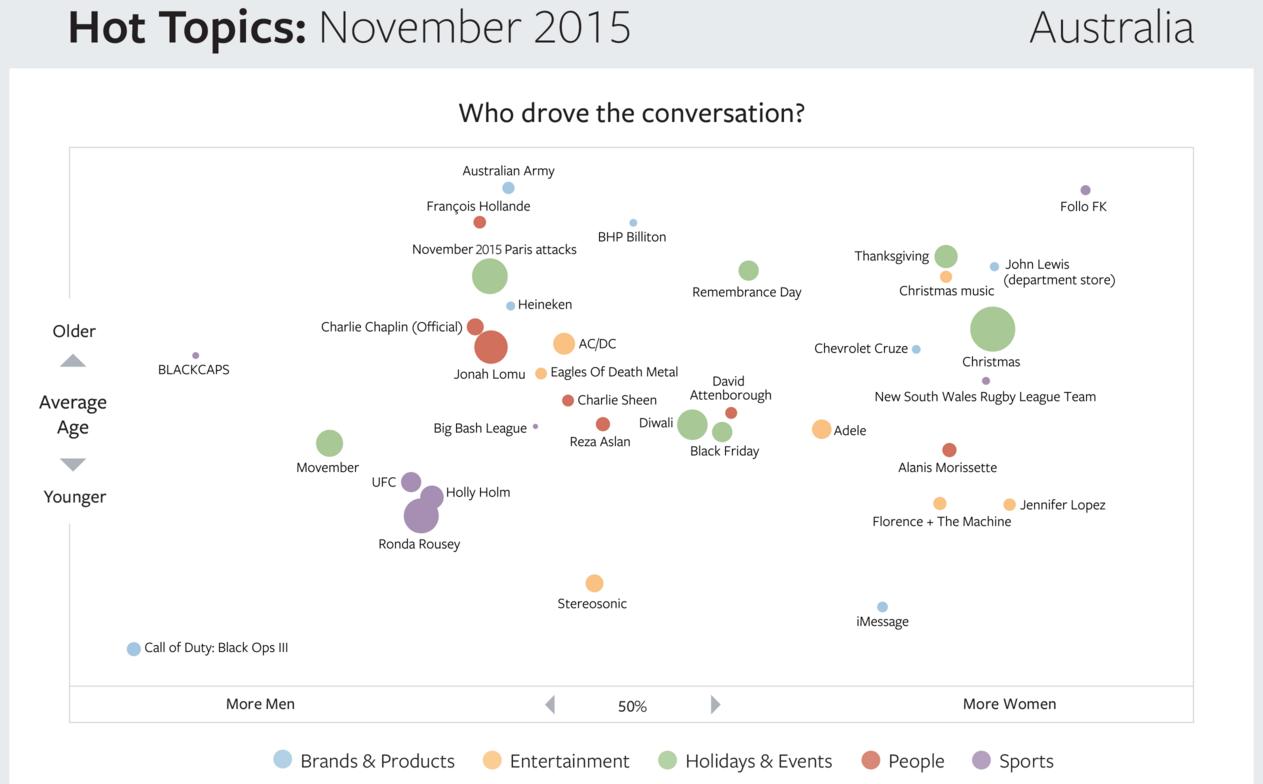 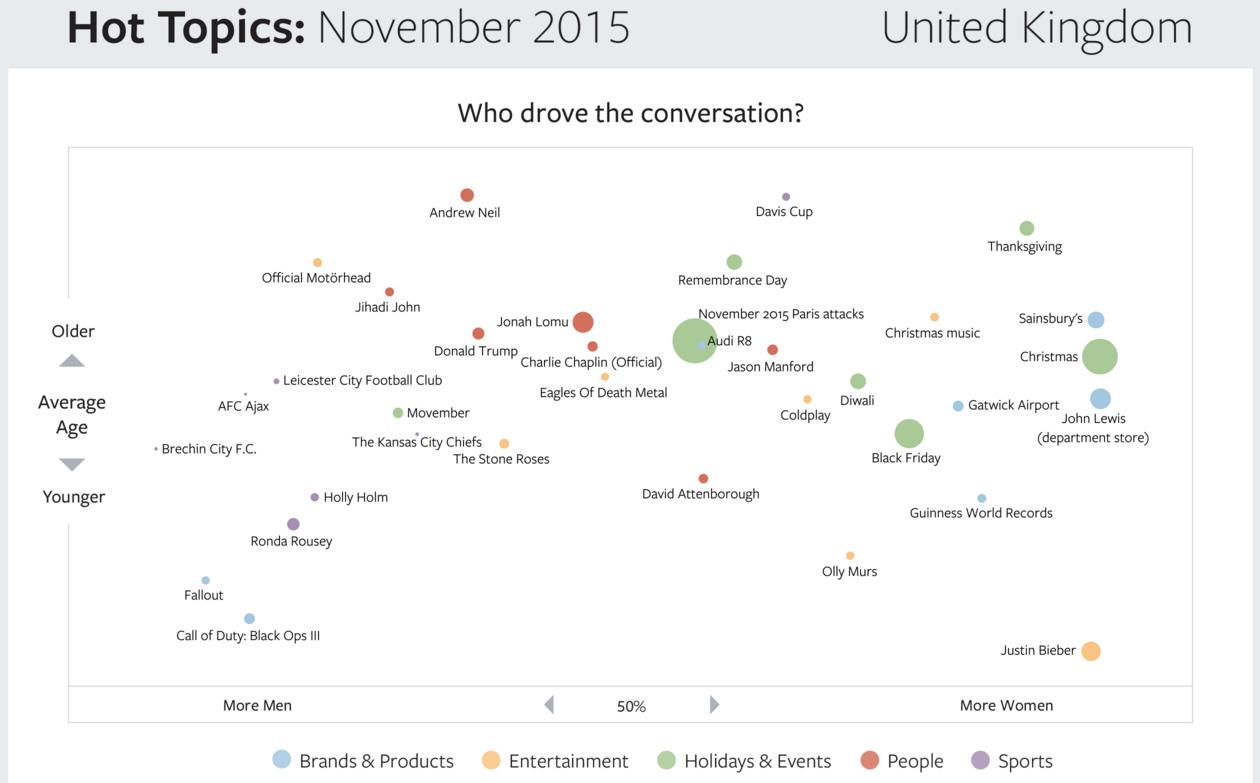 Overall, the Paris Attacks were the most discussed issue of the month - in fact, Facebook data has shown the tragic incident was the second most discussed global event of the year on the platform (behind the US Presidential Election race). This somewhat underlines the growing position Facebook is playing in our communicative and interactive process, it's the platform a growing number of people turn to to have their say on world events and share their responses.

Definitely, the Paris attacks make it harder to discuss the top issues of the month in any other context - everything else seems smaller by comparison - but hopefully next month's Hot Topics will be dominated by more joyful discussions and celebratory events.

View all | Post a press release
Locowise Publishes Report: The Role of Social Media Experts in 2021
From Locowise
Fastreel Video Editor: An Online Tool for Creating Great Content
From Movavi Software Inc
trendHERO has released The State of Influencer Marketing in Instagram 2021 for USA report
From trendHERO
Read next
Latest in Social Media Updates
© 2021 Industry Dive. All rights reserved. | View our other publications | Privacy policy | Terms of use | Take down policy.
We use cookies to optimize your experience on our website and for analytics and advertising purposes. By continuing to use our site, you agree to our cookie policy. Learn more
Accept