The Most Popular Messaging Platforms, By The Numbers [Infographic]

Messaging is exploding. As Mark Zuckerberg says, it's one of the few things more popular than social networking. Around the world, people are using messaging apps to communicate with one another - and unlike SMS, these apps are free.

The power of messaging apps is in their numbers. One of the main reasons companies like Facebook have been so active in trying to purchase messaging competitors is their access to users. If WeChat or WhatsApp can figure out how to make just a few dollars for every user they have, look out.

Here's a look at the leaders in the messaging space. 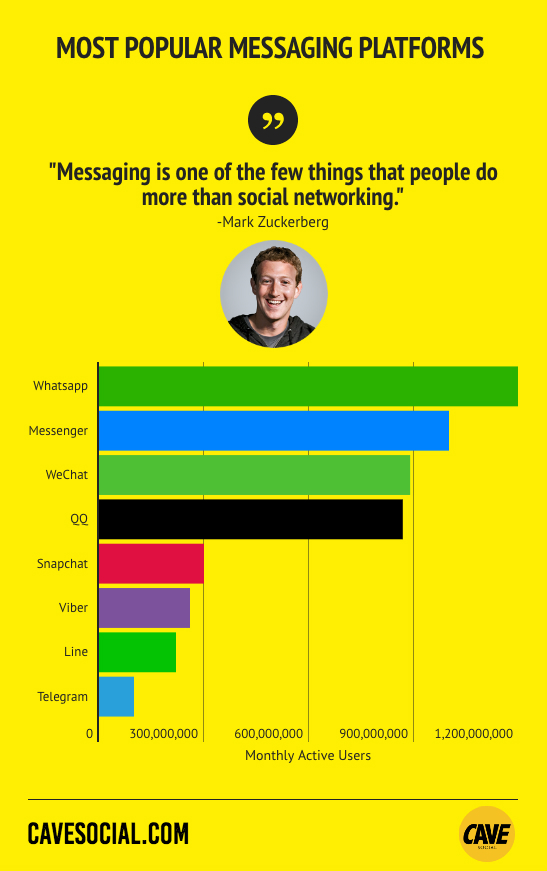 As you can see, Facebook is clearly the big winner when it comes to messaging apps. The company owns the two largest players, both Messenger and WhatsApp. For the most part, Facebook has let the apps stay advertisement free, and in particular, with WhatsApp, the user experience has stayed relatively pure - similar to the way it operated when they purchased the app.

The future for Messenger should be interesting. Facebook is putting increased emphasis on business tools and options, like Messenger Bots which interact with users in real time. And while bots haven't taken off as yet, there are a few are worth testing out for yourself.

Directly competing with Messenger and Whatsapp are QQ and WeChat, both extremely popular in China. They're also extending their services to offer more than just direct messaging, with search and other features being added. Users can now also share their content from WeChat to Facebook and Twitter, two websites which are currently banned in China.

What's your favorite messaging app? Let me know in the comments section below.