Last month, we got wind of a new test at Twitter which was showing some users total reply counts on their tweets. Now, Twitter has confirmed that this new functionality is being rolled out to all users, along with a new system which ranks replies based on various factors.

It's now easier than ever to see the buzz around your Tweet with reply counts and organized conversations: https://t.co/GM7DBEZbJr. pic.twitter.com/FgaH2I4nsI 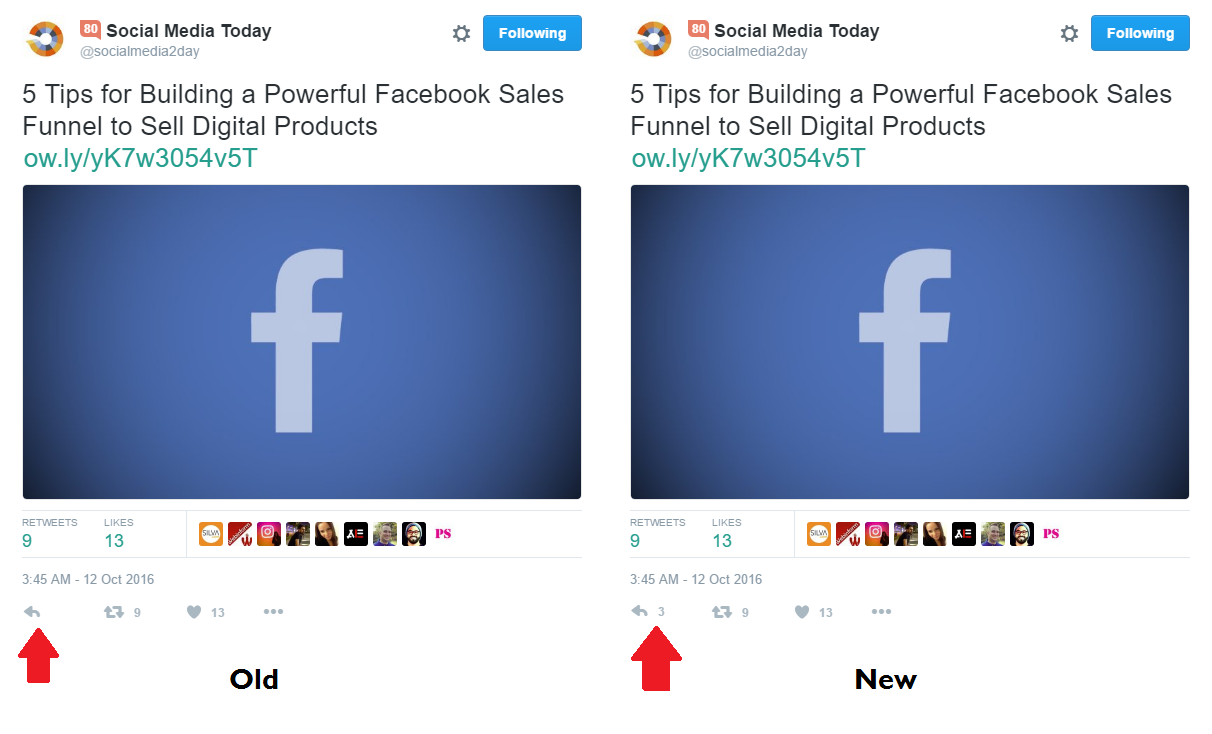 The addition provides more context as to the engagement levels on tweet content, which can help you get a quick overview of how people have responded to any given message. To be honest, it's kind of surprising Twitter hasn't added this sooner, it's a simple addition, but one which provides more context.

(And worth noting, the Replies listing doesn't add to Twitter's search and analytics capacity, you were already able to filter your tweet search results based on the amount of replies using the 'min_replies:' qualifier, which is great for finding topics generating tweet conversations.)

The new metric could also increase the motivation for people to click through on a specific tweet. Just as Facebook displays 'Likes', 'Comments' and 'Shares' on each of their posts, Twitter's 'Replies' stat would be equivalent to 'Comments' - and as you're no doubt aware on Facebook, seeing the level of activity on a post, in regards to comments generated, can inspire you to click through and see what people are saying, especially when you get a notification that one of your friends has commented.

On this element in particular, Twitter has also announced 'Conversation Ranking'.

"You may notice that some replies in a conversation are not shown in chronological order. Replies are grouped by sub-conversations because we strive to show you the best content first, and what we think you'd be most interested in. For example, when ranking a reply higher, we consider factors such as if the original Tweet author has replied, or if a reply is from someone you follow."

It's another way for Twitter to use algorithm ranking to boost engagement - as noted, just as Facebook shows you when one of your friends has posted a comment, Twitter too is looking to improve the relevance of their listings by showing you the replies you're more likely to be interested in - i.e. those from people you know and where the author him or herself has responded.

Of course, some Twitter users will be furious about this - any attempt to interfere in the real-time, in-the-moment nature of tweets is seen as an attack on the platform's core functionality - but the change makes sense. As part of their Q3 earnings announcement late last month, Twitter noted that their efforts to improve notification relevance via machine learning systems have thus far been generating good results.

Utilizing their available data and better personalizing the Twitter experience is a positive move for the platform - given Facebook's advancements on this front, Twitter was at risk of being left behind as audiences become more attuned to, and more expectant of, personalized experiences based on their actual interests and behaviors. Of course, there are also extended consequences of that approach (as we've seen in the most recent election and the 'echo chamber' effect), but such systems do improve user engagement - and Twitter's efforts are a long way off Facebook's in this regard.

Overall, these are both positive additions for Twitter, adding increased context and relevance and showing that they are working to better refine and customize the Twitter experience to each individual user. Those efforts can only help boost engagement, and grow platform usage as a result.