Everyone's favorite embattled micro-blog network Twitter has released its annual Year in Review, outlining all the key trends and moments on the platform from the last 12 months. Twitter's keeps in mind it's theme of 'What's Happening Now', providing data on all the major events - here are the key stats and notes. 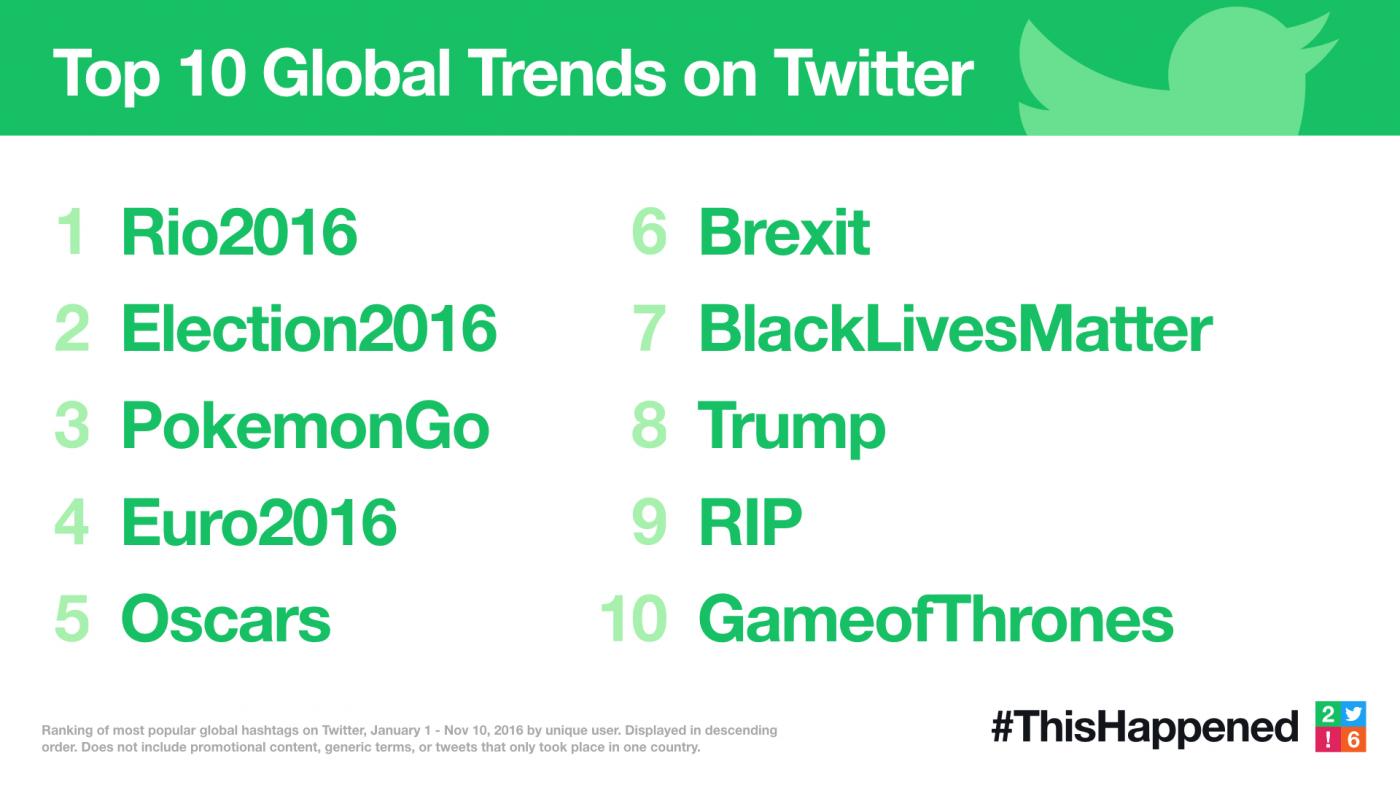 Unsurprisingly, the Rio Olympics and the US Presidential Election lead the way in terms of hashtag use - though the secondary mention of 'Trump' would likely put the Election ahead overall. 'PokemonGo' also ranks high, while the hashtag 'RIP' serves as a reminder of the many influential people we lost this year.

The listing shows that major events still dominate Twitter, it's still the place to go to discuss the latest happenings. It may also provide some guidance for your business as to whether you should be more active on the platform - if your products/services relate to any of these events or the themes that resonate with Twitter's user base - which may help improve response.

Most Retweeted Tweets of 2016

And the most Retweeted Tweets of 2016 are from... #ThisHappened

So how did @elrubius (aka Rubén Gundersen) beat out Hilary Clinton and Harry Styles for the top spot? In order to celebrate reaching 20 million subscribers on his YouTube channel, elrubius gave away a whole lot of games and gaming related equipment to anyone who re-tweeted that tweet. He also, apparently, gave away 4,000 lemons, from what I can tell.

Clearly it resonated with his audience.

Emoji use has continued to rise on Twitter, with the platform working to facilitate more emojis in 2016.

So what are the most popular emojis on the platform?

The Oxford Dictionary 'Word of the Year' for 2015, the 'face with tears of joy' emoji, has climbed the ranks to win out in the popularity stakes. The list is almost identical to the top emoji listing of 2015, with the order changed slightly and the 'clapping hands' emoji moved out in favor of the 'blue heart'.

It's good to know which of those little characters are generating the most response - if you're considering using emoji in your own Twitter marketing strategy, these top characters may be a good place to start, given the response they already generate and their popularity amongst Twitter's userbase.

Staying with the emoji trend, back in June, Twitter added a new Stickers feature which enables you to attach searchable, emoji-like images to your tweet images.

So what were the most used Twitter Stickers of 2016?

No real surprises there - the heart pretty consistently comes up among the most used emoji on the platform (which is why they changed the Favorite star to a heart late last year).

If you can take anything from this list, it may be that more positive content seems to generate better response on the platform, which may be a consideration in your own Twitter strategy.

Twitter's also released a summary of all the major events of 2016 in a 3 min video - it's a good reminder of the various incidents that took up our attention for the year.

They've also released a Moment which looks at the top Twitter for Business tweets from the year, while each of the regional Twitter blogs have posted their own top listings - including Australia, Canada, India and the UK.

Hopefully, at some stage, Twitter will release the full data behind all their trends, giving us some more operative stats and trends to work with, but these notes are provide some interesting elements to consider, along with being a reminder of the major events of a busy year.